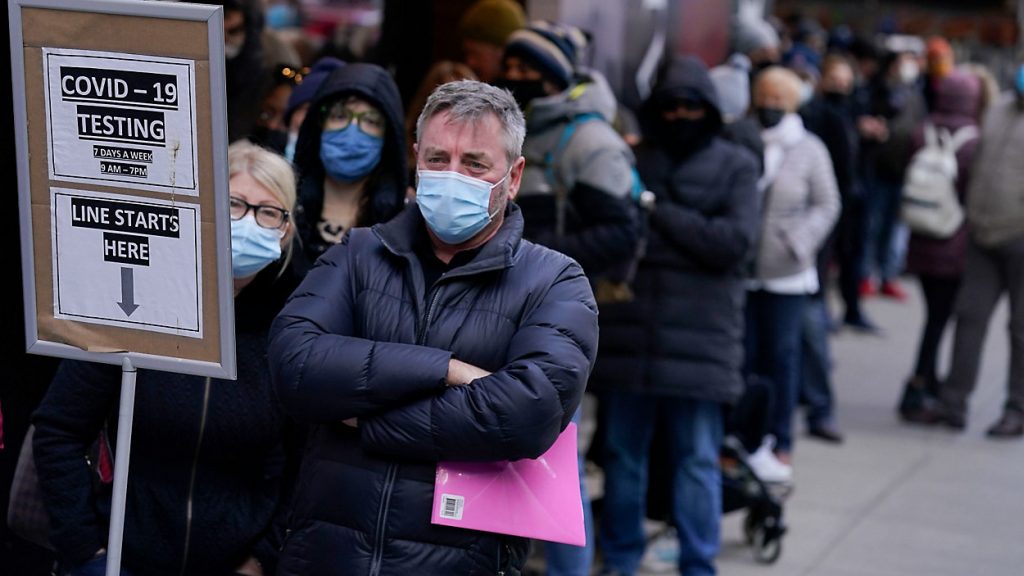 As the Omicron variant continues to spread  throughout the United States, it increasingly seems like everyone has covid. The number of confirmed cases is doubling or tripling every two to three days, and some estimates say that the country could reach one million cases a day soon.

The Biden administration hasn’t been subtle about the rationale behind the updated guidelines.

“With the sheer volume of new cases that we are having and that we expect to continue with Omicron, one of the things we want to be careful of is, we don’t have so many people out,” said Anthony Fauci, Biden’s Chief Medical Adviser. “If you are asymptomatic and you are infected, we want to get people back to the jobs, especially those with essential jobs.”

They aren’t even pretending that this is about public health or keeping people safe. This is about keeping the capitalist economy up and running. And the CDC is responding directly to calls from big capital.

With the rapid spread of the Omicron variant, the ten-day isolation for those who are fully vaccinated may significantly impact our workforce and operations. … To address the potential impact of the current isolation policy safely, we propose a five-day isolation from symptom onset for those who experience a breakthrough infection. Individuals would be able to end isolation with an appropriate testing protocol. As part of this policy change, we would be interested to partner with CDC to collect empirical data.

Basically, Delta is writing public health policy in the interest of their profits.

And we should not be fooled into believing that it’s only Delta airlines that is interested and invested in forcing people back to work. They are just the only ones that had a letter leaked to the press.

Governors also asked to loosen the restrictions. The Republican Arkansas governor Asa Hutchinson told NPR, “You know, there were some specific requests by governors that were made. One of them was that the isolation period be reduced for those that are tested positive. That way, they can return to work. … That’s a result of the communication with governors letting the White House know that’s the flexibility we need.”

The guideline shift isn’t based in science, it’s based on capitalist greed.

Usually, the CDC publishes a scientific brief with policy updates to prove the scientific basis of the change. Epidemiologist Jessica Malaty Rivera noted that didn’t happen this time. “Let’s see the papers that talk about the incubation period, the viral loads, the rate of infection.” NPR went on to say, “The agency could still come out later with a brief on the change, but without being clear about how the science has shifted…it also feels like it’s politically, economically motivated.” It feels that way because it is politically and economically motivated.

Multiple scientists have come forward to say that leaving quarantine after 5 days before any negative covid tests is unsafe. The director of the Yale Institute of Global Health said “Ending isolation of COVID cases in five days without testing negative is the nose-out-of-mask of COVID-19 policies.”

These guidelines must be viewed as a direct attack on workers. Even before the change in these guidelines, bosses were trying to force workers back to work in unsafe conditions. Schools were keeping teachers on the job despite possible infection. Temperature checks and social distancing have been scrapped.

And there is still no paid sick leave despite a worldwide pandemic.

This change in the CDC guidelines will be weaponized by bosses to get sick employees back to work so that they can make the bosses more money. It will make every single worker unsafe, as well as every single customer at supermarkets and stores around the country. It will make going to work every day a super spreader event.

Many people voted for Joe Biden in the hopes that he would get the pandemic under control and govern with more care for human life. After all, a centerpiece of Biden’s campaign was to criticize Trump’s poor handling of the federal response to the pandemic, claiming that he would have handled it better. But almost a year into his presidency, more people have died of Covid under Biden than under Trump, there are hours-long lines for covid tests, hospitals are overcrowded, and federal responsibility is being put on states to solve the covid crisis.

The average number of deaths per day for the past seven days is 1,204 people according to The New York Times; for the same time period, the average number of hospitalizations is 71,381. These numbers are only going to go up as Omicron spreads across the country with holiday travel and the new CDC guidelines. And that’s okay with Biden. “Hospitals in some places are going to be overrun both in terms of equipment and staff,” Biden said in a virtual meeting on Monday.

While the daily death rates are lower than under the peak of the pandemic, these new CDC guidelines open the door for even more infection for the sake of capitalist profits. The Biden administration has shattered the illusion that they were going to be the ones who would protect people in this pandemic. The goal isn’t to stop coronavirus, but to manage the pandemic in a way that increases capitalist profits and allows the capitalist economy to thrive.

The only way to stop the pandemic is to put the wellbeing of people over the wellbeing of the economy. We need free medical masks, testing, and treatment. We need paid sick leave. And we need to lift the vaccine patents that keep most of the world unvaccinated and increase the chances for more and more deadly variants to emerge.

We don’t need corporations dictating the government response to a public health crisis. We need a science-based approach that puts people over profit. And we need health and safety committees in every workplace that can debate and decide on the specific safety measures needed in their workplaces.