In the early hours of April 26, 1986, Reactor No. 4 of the Pripyat nuclear power plant in Ukraine—then part of the USSR—blew up. The HBO miniseries “Chernobyl” shows what caused the disaster: Stalinism. 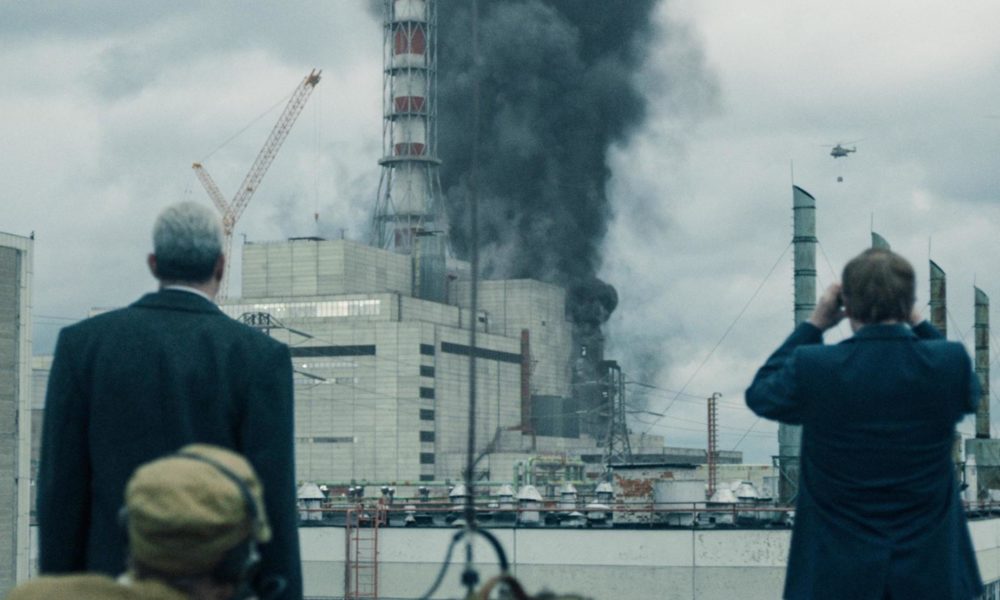 Stalinist bureaucrats refused to see what was right in front of their eyes. Picture: HBO

This is not the first time the Chernobyl disaster has been portrayed on-screen. Apart from several documentaries, 1991’s “Chernobyl: The Final Warning” was the first film to depict the disaster, premiering in the midst of the USSR’s dissolution. Although narrative films may help us understand the immediate events leading up to the disaster, we cannot fully understand how it happened if we ignore the political context of the USSR in the 1980s.

The USSR’s planned economy had led to amazing technological developments, but the quality of production remained low. As Hillel Ticktin described:

Why is it that although tractors and agricultural machinery are normal sights in farms in the USSR, meat, milk, fruit and vegetables are difficult to obtain in many towns of the USSR? … When more people are involved in the repair of machinery than either making it, or than in the production of consumer goods … it is clear that poor quality is at the heart of the economy system. … What makes matters still worse is that the repair itself is of poor quality. It is done mechanically and without any investigation and consequently to avoid accusations of poor workmanship the entire tractor is stripped and rebuilt when there is only a minor fault.

The dischord between production and consumption in the USSR was also intensified by another element in the administration of the workers’ state: the military sector. The USSR was mired in a war against the mujahideen in Afghanistan, and the military absorbed a large part of the electrical, machinery and engineering industries. This, along with a low birth rate, led to a stagnating standard of living for most of the population. The Chernobyl accident in 1986 is a direct expression of these conditions.

Chernobyl and the Flaws of the RBMK Reactor

While the name of the power plant comes from the nearby town of Chernobyl (Ukraine), the closest city which was home to all the nuclear engineers was Pripyat. Founded only in 1970, the city had about 50,000 inhabitants by 1986.

The nuclear power plant began construction two years after Pripyat was founded; Reactor 1 was finished in 1977, Reactor 2 in 1978, Reactor 3 in 1981 and Reactor 4—the one that exploded—in 1983. All were RBMK-1000 reactor models, a second-generation reactor that—as its name in Russian and Ukrainian suggests—is a “high-power channel-type reactor.” Designed in the 1960s, this model was highly unstable: It lacked appropriate shielding and had a high positive void coefficient, meaning the core sometimes did not absorb neutrons, making them increase exponentially. Only boron control rods could slow the production of energy.

The conditions were set for a catastrophic situation. The RBMK-1000 reactors were a state secret, as their purpose, besides generating electricity, was to create plutonium for nuclear weapons. Moreover, even the engineers who ran the reactors did not fully understand the extent of their limitations.

In the early morning of April 26, 1986, a safety test was being conducted in the control room of Reactor No. 4 to determine how to use surplus energy when almost almost none of the control rods were inserted into the core. The “mistake” of the engineers who created the RBMK-1000 was that they never thought someone would run a test on a nuclear reactor with the safety mechanisms turned off and almost no energy running.

Moreover, the engineers in the control room did not know that the boron rods had graphite tips, which would accelerate the core’s reaction exponentially when entering the reactor (whereas boron tips would have allowed the reaction to stabilize). Without protective shielding on the steel lid of the reactor, the heavy concrete cubes covering the core started jumping until the reactor exploded, spreading a lethal dose of radiation into the atmosphere.

Screenwriter and series creator Craig Mazin spent years doing extensive research, looking up direct sources, eyewitness accounts, recordings, books, visiting the Exclusion Zone, etc. These efforts yield a dramatization of the events that does not stray far from what really happened—although the series does take creative liberties. The miniseries realistically depicts the reactions of the engineers, politicians and local residents when the catastrophe occurred. It shows the mindset that Stalinism fostered among the Soviet population and its bureaucratic apparatus.

From a military point of view, the bureaucracy’s ineptitude was expressed in its reaction to the Nazi invasion in 1941:

The Soviet High Command suffered a virtual paralysis because it did not have clear political orders from Stalin. … During the first weeks of the invasion, a large number of Soviet units were quickly surrounded and thousands of soldiers were taken prisoner. … Stalin was a victim of the very system of domination he had built, which had an apparatus completely obedient to his commands, with fearful officers incapable of any independent initiative. (Our translation.)

The series shows the other side of the coin: the systematic refusal of the Stalinist bureaucracy to deal with a disaster that surpassed their preparation. Immediately after the accident, the test’s chief supervisor, Anatoly Dyatlov, insisted—against the reports of his own engineers who had seen the burning ruins—that it was the water tanks, not the core, that had exploded. He even refused to admit that there was graphite on the roof of the plant, which could only have gotten there by an explosion of the reactor’s interior.

The same happens when Viktor Bryukhanov, the power plant’s administrator, and Nikolai Fomin, the chief engineer, and the old party member Zharkov, member of the Executive Committee of the Communist Party in Pripyat, discuss the incident in an emergency meeting. All deny that the core is exposed, and their “proof” is that none of the engineers can explain how an RBMK-1000 reactor could possibly explode, even though there are already firefighters and doctors showing symptoms of radiation poisoning. Zharkov even remarks that “it is our moment to shine,” ordering everyone to censor news of casualties and report to the Kremlin that everything is under control.

The Stalinist bureaucrats were willing to deny reality even when they could see people getting sick, as they were only concerned about their privileged positions. Dyatlov tells an engineer that he “did not see graphite because it’s not there.” Bryukhanov similarly tells a superior that what he saw on the roof of the plant was concrete, not graphite.

The Chernobyl disaster was a result of state policies: secrecy about the functioning of RBMK-1000 reactors (for reasons of state security), blind obedience to the party apparatchiks while ignoring the scientific experts, and negligence in informing the population (and the world) about the accident. The series shows the engineers in the control room—hospitalized, close to death, in advanced states of deterioration and with parts of their bodies showing necrosis—asking if they did everything right, as they were told to.

Administrative planning has sufficiently revealed its power—but therewith also the limits of its power. An a priori economic plan—above all in a backward country with 170 million population, and a profound contradiction between city and country—is not a fixed gospel, but a rough working hypothesis which must be verified and reconstructed in the process of its fulfillment. … [Needed is a] political lever, in the form of a real participation in leadership of the interested masses themselves, a thing which is unthinkable without Soviet democracy. … In the Soviet Union, however, there is now taking place a ruthlessly severe fitting in of backward human material to the technique borrowed from capitalism. … In any case, state ownership of the means of production does not turn manure into gold, and does not surround with a halo of sanctity the sweatshop system, which wears out the greatest of all productive forces: man.

The Chernobyl accident confirmed Trotsky’s argument that “under a nationalized economy, quality demands a democracy of producers and consumers, freedom of criticism and initiative—conditions incompatible with a totalitarian regime of fear, lies and flattery.”

There would have been a very different outcome had the nuclear engineers themselves possessed not only adequate preparation but also the most advanced knowledge in atomic energy—not only the correct safety test procedures but also knowledge of the limitations of the RBMK-1000 model.

The incompetence borne out of Stalinism created the conditions that led to the disaster; once it was out of control, the politicians could not face the crisis. It was the scientists, volunteers, miners, liquidators, pilots, soldiers, etc., who took into their hands the titanic task of sealing the radioactive monster that had been unleashed on the world. The bureaucrats’ arrogance is depicted in the series in their refusal to allow specialized robots from the United States to be brought to help clean the graphite rubble from the roof nicknamed “Masha.” The Chernobyl disaster subsequently became part of Gorbachev’s justification for glasnost and perestroika, the infamous reforms that led to the restoration of capitalism Trotsky had predicted 53 years earlier.

Today, Pripyat is abandoned and left to decay as a ghost town and the nuclear power plant is covered by a dome designed to last 100 years and to prevent the release of more radioactive dust. 170 towns and villages have been abandoned as a result of the disaster.

A command economy run without the direct democratic control by the working masses themselves—the caricature that Stalinism presents as “socialism”—has proven itself ineffective. History has given its verdict. Chernobyl shows the failure not of socialism but of Stalinism and its bureaucratism, authoritarianism and incompetence.

Today we are facing an environmental crisis that has caused a series of natural disasters as a result of severe climate change. The current scenario is entirely caused by capitalism. As Trotsky wrote, “amid the vast expanses of land and the marvels of technology, … the bourgeoisie has managed to convert our planet into a foul prison.” Capitalism now presents us with a final countdown until the planet is unable to support life. Is all hope lost? Far from it. What we need is a planned economy democratically implemented by the workers and masses: this is socialism, and this is what can save humanity from a catastrophe bigger than even Chernobyl.