Black Lives Matter activists in Chicago have announced that they will hold a major demonstration on Christmas Eve in protest of the police killing of Laquan McDonald and the subsequent cover-up by police, city officials, and Mayor Rahm Emanuel. The protest, dubbed “Black Xmas,” aims to directly hit corporate profits on one of the busiest shopping days of the year. 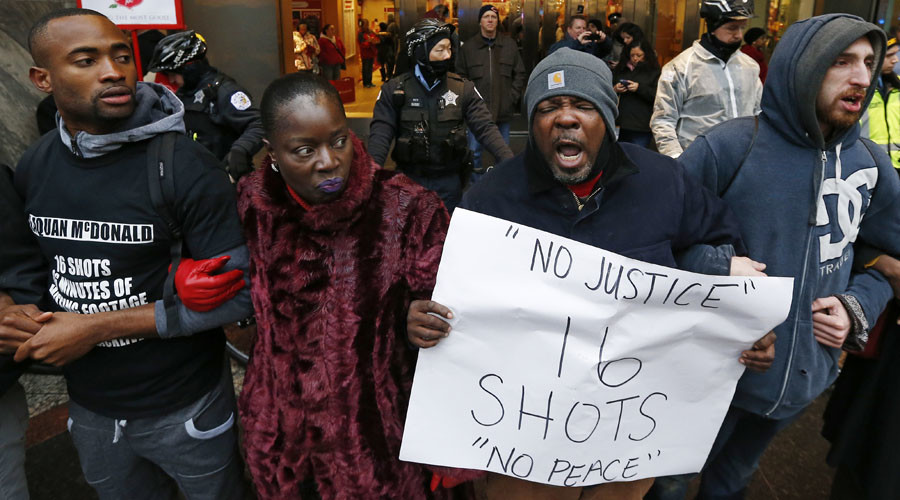 Protests have taken place on a near daily basis since a video was released on November 24, which showed the gruesome killing of Laquan McDonald more than a year earlier. The video shows McDonald, a 17-year-old African American high school student, shot repeatedly in the back while walking away from police. Police even continued to fire while McDonald lay on the ground.

Last August, freelance journalist Brandon Smith filed a lawsuit for the release of the video, which was fiercely resisted by Chicago city officials. It was only after an order from a Cook County Circuit Court judge that the Chicago Police Department made the footage available to the public. Once the video was released, the state’s attorney announced murder charges would be filed against Officer Jason Van Dyke—a full thirteen months after he shot McDonald dead.

Demonstrators in Chicago are calling for the ousting of Mayor Rahm Emanuel for his role in covering up the killing. As Bernard Harcourt points out in a New York Times Op-Ed , the evidence provided by police dash cam video would certainly have been made available to the state’s attorney immediately after McDonald’s killing. But instead of using this footage to file charges, the city sat on the evidence for over a year. Moreover, the state’s attorney refused to charge police with evidence tampering when 86 minutes of additional surveillance footage — during precisely the time before and after McDonald was killed — mysteriously went missing from police records.

What has made the protests in Chicago different from so many others that have taken place across the country is that they directly implicate the Obama administration; Emanuel served as Obama’s Chief of Staff from 2008 until 2010 and the two have kept in close contact in the years since Emanuel left his post to become mayor. Politico reports that there have been frequent visits by Emanuel to the White House and a backstage meeting between the old friends took place during the president’s visit to the International Association of Chiefs of Police in Chicago. While Obama called McDonald’s death “disturbing,” he has maintained at least tacit support for the mayor, refusing to publicly denounce Emanuel, much less to call for his resignation or prosecution. What’s clear is that Obama can no longer wash his hands of the ongoing killings of black and Latino youth throughout the country.

The fallout from the scandal surrounding Rahm Emanuel could spill onto Hillary Clinton’s campaign as well. Emanuel was a top advisor to Bill Clinton in the ‘90s and helped create the legislation that has led to skyrocketing incarceration rates, especially among blacks and Latinos. Hillary Clinton, while calling for a review of Chicago P.D.’s actions, has stood by Emanuel. A spokesperson for the Hillary Clinton campaign said “[Clinton] knows Mayor Emanuel loves Chicago, and is sure he wants to do all he can to restore trust in the Chicago Police Department.”

Meanwhile, protests have continued in Minneapolis after police murdered 24-year-old Jamar Clark on November 15. On Wednesday, activists attempted a take over the Mall of America in the city. When the protest was broken up by police and mall security, demonstrators marched to the Minneapolis-St. Paul International Airport, and succeeded in temporarily shutting down traffic to and from the airport. The