On Tuesday, Chicago teachers narrowly voted to approve a proposal from the CPS that would have them return to their classrooms over the next several weeks. Though much better than the original reopening plan, even the union leadership admits it is imperfect. A real victory can only come from the organized rank and file. 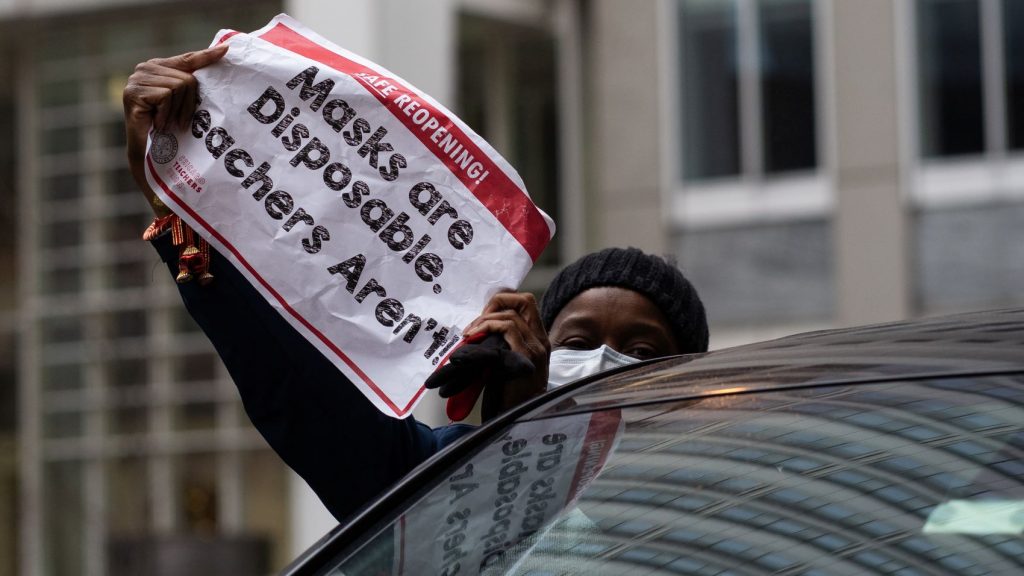 After three weeks of fierce negotiating and threatening to strike, the Chicago Teachers Union (CTU) has reached a tentative agreement with the Chicago Public Schools (CPS) administration to reopen all of the city’s more than 600 public schools.

The agreement, which was hammered out between the CTU leadership, CPS, and Chicago Mayor Lori Lightfoot last week, was voted on and approved by a majority of the union membership on Tuesday, February 9. Of the 25,000 members represented by the CTU, 54 percent voted in favor of the agreement, more than a quarter voted against it, and 5,000 members abstained. This suggests that a significant portion of the union — a good quarter at least — was ready to strike in order to obtain a better deal for a safer reopening or to remain closed. One of those teachers, Brian Zane of Ridgeview Elementary, explained why he voted to authorize a strike.

“I knew that we had to do something, we had to make this plan safer; the plan was so incomplete and really offered so little protection to teachers and students and communities and I knew that our best leverage of power was to first stay home and then if they locked us out, to go on strike.”

Despite the fact that many members voted against the agreement and that conditions for many returning teachers — especially those returning on February 11 — are still unsafe, the deal reached with CPS nonetheless provides significant advances over the original plan put forward in January. Most importantly, the new plan postpones the return of most students and many teachers until March. Pre-K and special education cluster programs will return February 11, but kindergarten through grade 5 teachers will not return to prepare classrooms until February 22, and students in those grades will not return until March 1. Meanwhile, teachers in grades 6-8 will return on March 1, and their students will return March 8.

This is an especially important victory, since coronavirus infection rates in Chicago have fallen significantly since the union refused to return on January 25. When CPS originally asked teachers to return, Chicago was still in the midst of an “active outbreak,” and the infection rate was well above 7 percent — much higher than what the Centers for Disease Control (CDC) recommended for safely opening schools. In contrast, the city is now listed as “at risk of outbreak” and the infection rate has since fallen to just a little over 4 percent — below the 5 percent baseline for safe reopenings. In this respect, it is quite possible that the five weeks of time that the union gained through its militant approach to negotiations could have saved several lives and avoided hundreds of infections.

The plan also provides stricter rules around when to close schools in case of local outbreaks or city-wide increases in infection rates, guarantees vaccinations for all returning faculty and staff, and includes a side agreement that dismisses all disciplinary actions against teachers for working remotely without permission. This side agreement is significant, since the union had explicitly advised its members to refuse to return to in-class teaching. Dismissing all potential disciplinary action against those teachers shows the power of solidarity to beat back attacks from the bosses — a key lesson for future struggles. Unfortunately, the CPS is still refusing to pay the wages for the teachers who were locked out, many of whom lost as much as a month of wages. The union has, however, put together a $200,000 fund to attempt to make those teachers’ paychecks whole.

The real story here however, is not the strengths or weaknesses of the agreement, which is certainly mixed, but the amount of power and confidence with which the CTU collectively approached the negotiations around the reopening plan and what this means for educators across the country. The CTU waged a tough battle against a popular “progressive” Democratic mayor who was bent on forcing teachers to go back to school. Part of a wider attempt by the Biden administration to reopen schools across the country, this battle with Lightfoot was an important test case for how future battles might pan out. In this respect, it is a shame that the union did not take a more militant stance and insist on remaining remote for the rest of the spring — the only way to really ensure their safety — but they did nonetheless win meaningful concessions.

Though they did not go on strike, the CTU managed to postpone sending most teachers to classrooms until it was safer and until all faculty and staff were vaccinated. In a country where right to work laws have increasingly undercut the power of unions, postponing school reopenings for more than an entire month is a significant victory. This was made possible because the CTU members voted overwhelmingly in January to support a strike if needed to win their demands. That strike threat was made all the more powerful, however, by the fact that the CTU had already shown twice in the last decade that they are willing to do more than make idle threats, and that they are ready to strike and strike big. That strike muscle is strong in the CTU and it is the reason why they were able to remain firm in their negotiations with Lightfoot and eventually win their demands.

CTU’s struggle around reopening shows the strength of organized labor and that unions can set the agenda and win their demands even in situations where strikes are supposedly “illegal.” The fight against the CPS also sets a strong precedent for teachers unions everywhere that it is ultimately their decision when and if they return to work during the pandemic. Unfortunately, individual struggles in this or that city are insufficient to address the systemic problems and structural inequalities that plague the U.S. public education system. To do that, rank and file teachers across the country must come together to fight the national union bureaucracies that hold them back and build a national strike movement to demand safe reopenings, protect their most vulnerable students, win more federal funding, kick cops out of their schools and their unions, and defeat right to work laws that limit union militancy.