As Chicago public schools prepare to return to in-person learning, the leadership of the Chicago Teachers Union says the schools are not safe and are urging their members to walk out on Monday. 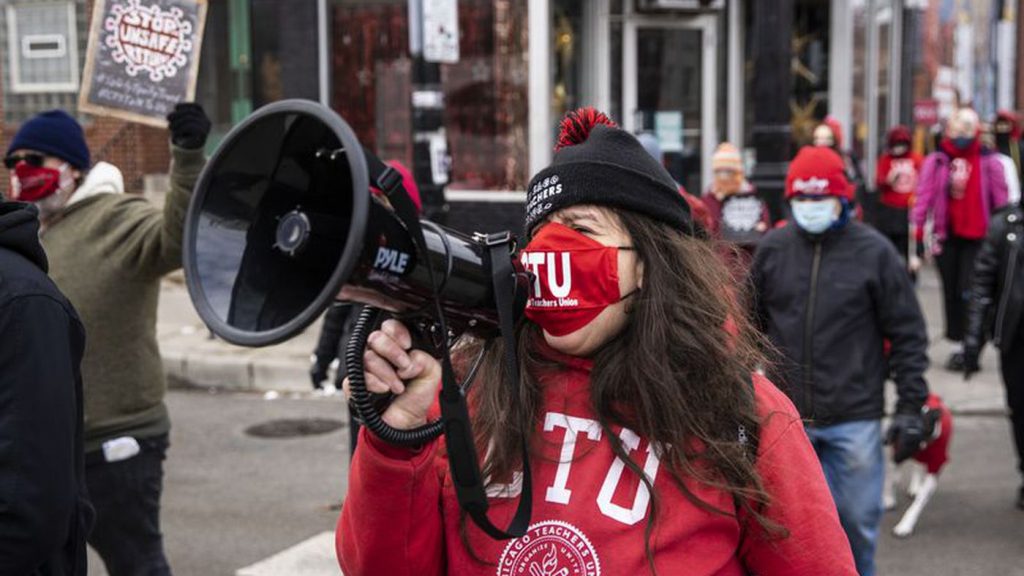 On Wednesday, January 20, just hours after the inauguration of President Joe Biden, rumblings of dissent were already beginning to sound in the union halls of Chicago. That evening, delegates of the Chicago Teachers Union (CTU), representing more than 25,000 teachers and paraprofessionals, voted overwhelmingly to defy the unsafe and unfair Chicago Public Schools reopening plan. This decision comes just two weeks after hundreds of preschool and special education teachers, also represented by the CTU, refused to return to the classroom because of unsafe working conditions.

The resolution, which was passed by more than 80 percent of the 600-member House of Delegates, authorized all CTU members to refuse to return to classrooms and to work remotely in the event that Chicago public schools reopen on January 25. The decision is currently being voted on by rank-and-file members of the entire union, who have until the end of Saturday to make a decision. If ratified, the resolution will pave the way for what would amount to a mass walkout of teachers on Monday and, in the event of a lockout by management, a union-wide strike of all Chicago public schools. The last time the CTU went on strike, in 2019, they shut down schools for two weeks and received wide support from parents and the general public. Another strike to protect the health of children and their communities would no doubt also be widely supported from workers across the city.

The decision to reject the Chicago Public Schools (CPS) administration’s reopening plan comes at a time when the country is still reeling from a devastating second wave of Coronavirus infections and deaths that, combined with the first wave, have now taken the lives of more than 400,000 people in the United States, including many students, educators, and school staff, and which has left thousands more permanently health-impaired. “This is about a pandemic that has killed 400,000 Americans, and an overwhelming majority of our delegates are resolved to putting safety first and continuing to teach remotely,” said CTU President Jesse Sharkey in a press release issued on Wednesday.

While Chicago has not been hit as hard as some other regions, the rate of infection is still three times higher than the peak of the first wave in March. The positivity rate for the city, a measure frequently used by epidemiologists to assess when and whether to reopen schools, is currently 7.6 percent, well above the 5 percent rate the CDC says is needed to reopen schools with a “low risk of transmission.” Meanwhile, Illinois state is currently still experiencing an “active outbreak” with more than 37 new cases per 100,000 residents each week, a number that is almost double the CDC guidelines for what constitutes a “moderate risk” of school transmission. These factors are why 147 CPS nurses signed on to a statement earlier this month unequivocally expressing their opposition to reopening.

COVID-19 has taken a terrible toll on everyone. Students, families, and educators have all been affected. For the African-American and Latinx communities, there has been disproportionate suffering. It is little wonder that two thirds of families from these backgrounds have opted to continue remote learning. Chronic racist health inequities underlie these disparities, and CPS arguing that “equity” needs to drive students back into unsafe buildings makes no sense.

That the CPS believes it is safe to open schools for in-person teaching under such circumstances and in the face of such opposition from professionals on the front lines shows how out of touch these administrators are. It also reveals, yet again, the important role that unions have played and must continue to play in defending their workers and their communities against the coronavirus pandemic.

A walkout or strike by the CTU, just days after the start of an administration that has sworn to open public schools across the United States within 100 days, could send a real message that unions are ready to fight this new administration and to protect the lives and livelihoods of working people everywhere.