Chile: A Million People Take to the Streets as the Government Extends State of Emergency

President Sebastián Piñera has taken a hard line against the popular movement in Chile. A million people took part in demonstrations throughout the country on Monday. In response, Piñera expanded the state of emergency to include eleven provinces. 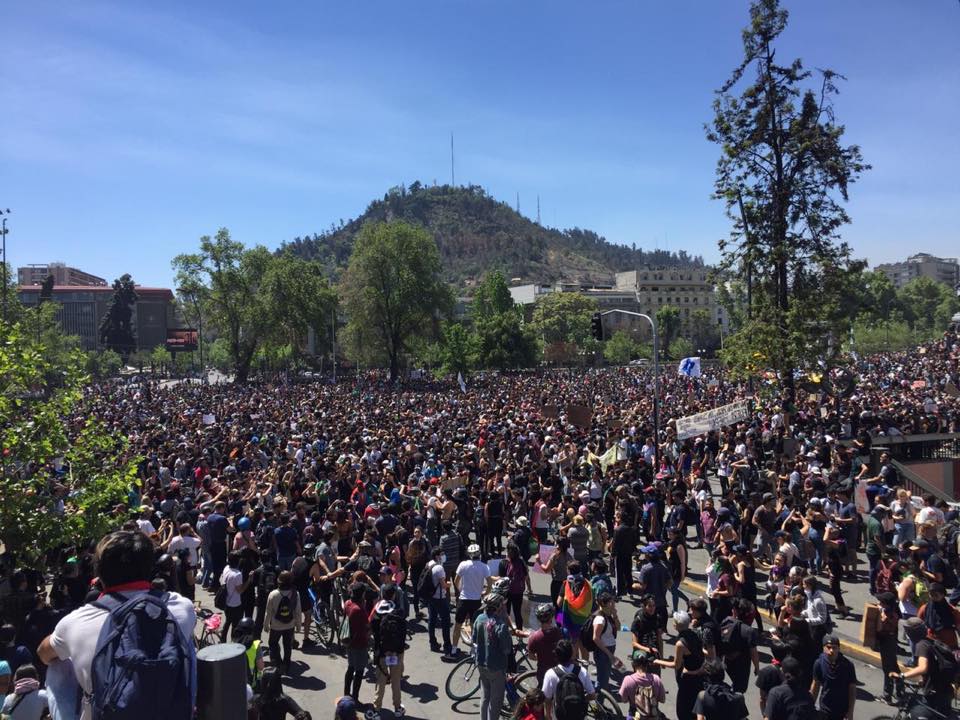 More than a million people took to the streets in Chile on Monday to protest the neoliberal regime of President Sebastián Piñera. From Arica to Punto Arenas, spontaneous demonstrations erupted in the streets of all the major cities of Chile, in conjunction with a national strike of dockworkers as well as miners from the northern region of the country.

In his most recent press conference, President Piñera announced repressive measures for the regions of Atacama and Los Lagos, increasing the total to eleven provinces under curfew and a state of emergency. These include Iquique and Pozo Almonte, Coquimbo and La Serena, Valparaiso, Rancagua, Concepcion, Valdivia, and Gran Santiago.

The military had toughened its response to the protest wave, firing live rounds against peaceful protesters in the Plaza Italia of Santiago and elsewhere. This increasingly militarized response on the part of the government has not deterred people from joining the demonstrations. Chants of “Chile has Awakened “ echo throughout the country.

Predictably, the President has branded the demonstrators as mobs of delinquents, and although this message has been broadcast by the big media outlets, it has not had the desired effect. The ranks of popular protest continue to swell.

In addition to the street demonstrations, a dockworker’s strike has shut down 20 ports. High School teachers in Antofagasta and Temuco are organizing emergency action committees. Miners have also begun to mobilize in the north. Their actions may soon spread to the working class in general, raising expectations for a huge turnout to overthrow the Piñera government.

In addition to the massive mobilization of more than 100,000 workers, students and women yesterday in Santiago, Healthcare workers organized open air assemblies of workers and neighborhood groups.

Young people have been an important factor, sparking popular momentum in the streets. In Valparaiso, students of the Playa Ancha University have occupied the regional government office, where they have organized emergency committees for increased popular mobilization to combat the state of emergency. High school students in Panguipulli, Osorno, and Coyhaique paralyzed classes and took to the streets in solidarity with protests throughout the country.

Meanwhile, Piñera repeats the same tired phrases: “Violence must not prevail in Chile, which is why we have called for an expansion of the curfew and state of emergency to eight additional provinces.”

At the same time that the president has increased military and police repression against the demonstrations, he has called for a meeting of leaders of the right-wing parties in an attempt to usher in a new social pact through parliamentary measures. But the chasm between his call for peace, and government-backed violence in the streets, demonstrates that the dictatorship can only be stopped by popular mobilization.

Towards a General Strike

We need more than a defense of democratic freedoms against authoritarian, bonapartist attacks. The goal is not only to put an end to the state of emergency, but to overthrow the government through a general strike. We are calling for the formation of a Constituent Assembly, with representatives elected for each 20,000 residents, who are subject to recall and earn a worker’s wage.

A truly free and sovereign constituent assembly can only be created on the ruins of the neo-Pinochetist regime. The existing institutions must be overthrown so that a truly representative, working-class government can take its place. Today democracy is in the streets, not among the old rotten institutions which stand against the popular and working classes.