Faced with more than a month of challenge to his regime’s very existence, Chilean President Piñera has rolled out the latest attempt to quell the revolt in the streets that has mobilized millions: a phony process to “revise” the constitution inherited from the Pinochet dictatorship while keeping himself in office and ensuring the continuation of bourgeois rule. And he has willing partners on the left: Frente Amplio has signed on, and the Communist Party is deep into the discussions with the murderous government, although the CP hasn’t yet gone so far as to sign the agreement officially. 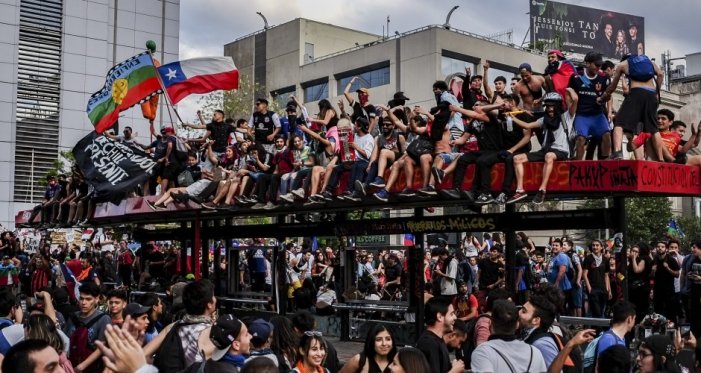 A battle has raged in Chile since mid-October that began with protests by young people in Santiago, the capital city, over an increase in public transit fares. Since then, it has escalated to a nationwide uprising by a populace weary of the erosion of the standard of living, a massive growth in wealth inequality, the destruction of pensions and public services, and the marginalization of growing sectors of the country’s youth—all part of the legacy of 30 years since the end of the Pinochet dictatorship in 1990.

The response by the government of President Sebastían Piñera has been soldiers in the streets throughout Chile, for the first time since the dictatorship. Along with the police, the soldiers have waged a brutal campaign of murdering protestors, blinding and maiming others with pellets, and torturing and sexually assaulting detainees.

The battle line that has been drawn in Chile is a class line. On one side stand the workers, high school and university students, women, indigenous peoples, and the popular movements. On the other side stands Chile’s ruling rich and the politicians who serve their interests. The victims of the dictatorship and its legacy are standing up against the inheritors of its spoils.

The inevitable question for the parties and organizations that claim to lead the working class and to represent the interests of the masses is: Which side are you on?

In the past few days, with the most recent effort of the ruling class to protect its president from being ousted and its regime from being overturned, this question has become as concrete as it has been at any moment since the uprising began. The Stalinists of Chile’s Communist Party and the Frente Amplio (Broad Front) coalition of “left” parties and movements have chosen their side.

From the beginning of the uprising—and despite the massive “Out with Piñera!” demand from the streets—they have worked hard to channel the masses onto a path that would maintain the bourgeois order. They and the organizations and social movements they lead have been among the main proponents of a “Social Unity Roundtable,” a cynical effort to demobilize the masses and take the ouster of the government off the agenda. At every juncture, they have tried to limit the power of the people in the streets by pacifying them, diminishing the strength of their demands, and, when possible, working to keep them off the streets altogether. The CP and Frente Amplio leaderships signed up, early on, to be part of a “rescue operation” for a regime threatened by a month of general strikes, massive protests, shutdowns, violent clashes, the seizing of police stations, burning of buses, and a host of other challenges to its authorities mounted by combative workers, youth, and popular movements.

Now the CP and Frente Amplio have been tested again. On Sunday, November 10, Piñera proposed a “resolution” of the crisis—a revision of the constitution through a process that would be led by the Congress—the same parliamentary body that is controlled by the parties of his regime. Two days later, on Tuesday, November 12, upwards of three million Chileans took to the streets in a huge protest and general strike that shut down key industries and was a clear rejection of Piñera’s proposal. The chants of the masses made clear what the Chilean people want: “Out with Piñera!” and “For a Constituent Assembly!”

This strike was significant in that the working class played a more central role in the day’s protests and, by extension, in the overall struggle to oust Piñera, which had been launched initially by the youth. So, what did the CP and the Frente Amplio do? They betrayed the very class they claim to represent and lead.

The CP and the Frente Amplio were part of a sort of “kitchen cabinet,” along with Piñera’s ruling Chile Vamos coalition and the old Concertación coalition (which held the presidency from the time military rule ended until Piñera won in 2010), the purpose of which was specifically to find a “solution” to the crisis, a way to contain a struggle that was beginning to find its way to a strategy that could actually throw Piñera out. At a moment when the cry from the streets has been crystal clear, these parties agreed to, as Fabián Puelma writes in La Izquierda Diario, “give an oxygen tank to a living dead man.”

The “kitchen cabinet” hammered out a proposal for how to get the masses out of the streets long term. Chile will hold a plebiscite five months from now, in April 2020, to consider a “new constitution.” It is a move of desperation in response to the demand, raised throughout the country, to undo once and for all what has been inherited from the dictatorship and codified in the current constitution, which was written in 1980 by a commission led by Pinochet’s constitutional advisor Jaime Guzmán. It includes the authorization for the state of emergency Piñera declared in October and his recent expansion of intelligence and enforcement efforts by the state.

The referendum will ask voters whether they want a new constitution and how they want it drafted. The choices are a convention with a mix of “citizens” and “legislators” or one entirely comprised of “elected citizens.” If the vote is yes for a new constitution, delegates to the convention will be elected in October 2020, nearly a year from now. Then, as much as a year could be spent drafting a new document, which would have to pass with a two-thirds majority. Once approved, it would be put to the voters in another nationwide referendum.

The most important of these details concern who will comprise the “constitutional convention” and how its decisions will be made. The entire enterprise is, as La Izquierda Diario correctly characterizes it, a “trap.”

“Delegates will be chosen through the same electoral system that governs the election of parliamentary deputies. In other words: the lists of the regime’s parties will be overrepresented, union and neighborhood leaders will not be able to be elected, and the most aberrant aspect is that those who began the rebellion—Chileans under age 18—will not be able to participate or be elected!” In other words, the workers, high school students, women, and indigenous peoples who have been battling in the streets will not be there to express themselves.

As for the two-thirds majority, it gives veto power to the representatives of the current regime, ensuring approval of their rules and regulations for how the “discussion” will unfold. As La Izquierda Diario explains, “What that quorum does not achieve will be decided in the undemocratic halls of a Congress repudiated by millions.”

It is a “Jaime Guzman-style” farce—nothing more than a cover for the current ruling parties, an effort to protect and maintain the institutions of bourgeois rule, and an attempt to shield Piñera from being ousted.

The responses of the Stalinists and the Frente Amplio are instructive. All but one of the groups that comprise the Frente Amplio has signed the agreement issued by the kitchen cabinet. The Communist Party has not yet signed, but insists that it will participate: “We will not be subtracted from the process.” They want to “expand the dialogue through the Social Unity Roundtable” and defend this undemocratic plebiscite and “constitutional convention” as a victory for Chile: “Our position has won.”

At a moment when choosing a side is critical for the Chilean masses, the Frente Amplio has largely stepped over the line to embrace the ruling class. Its leaders cynically claim that the two-thirds majority stipulation will prevent the right wing and conservatives in a future constitutional convention from imposing their terms, “as if,” writes La Izquierda Diario, “the mobilized working people were a minority to be protected!” Meanwhile, the Stalinists could charitably be described as “straddling” the line.

Do not be fooled. Their maneuver is not in the interests of the working class.

There is an alternative being posed. It flows directly from the interests of the masses in the streets, the Chilean working class, youth, and indigenous peoples. The Revolutionary Workers Party (PTR) has been raising the alternative to the kitchen cabinet agreement since before it was even announced: oust Piñera, liquidate the regime, and on its ruins push forward with a truly democratic constituent assembly, one that is free and sovereign and in which working people will be the decision makers. The PTR has specified that that assembly’s delegates should be elected by all people over the age of 14; that there should be one representative for every 10,000 voters; and that these delegates should be subject to recall and be paid the same wage as teachers. And in this constituent assembly, there would be no barriers to what can be discussed and what solutions can be developed. As Dauno Tótoro, a PRT leader, put it in La Izquierda Diario, “No institution of this capitalist, neoliberal state” should be immune to its decisions.

“We believe,” Tótoro stated, “that the forces exist to bring down this government, by means of an open-ended general strike—which is essential to winning our demands.”

The contrast could not be clearer. On one side, the side of the ruling class, there is an agreement orchestrated to save Piñera and his regime. It is an agreement that will change nothing of substance. It is concocted deliberately to divert the struggle of the Chilean masses down the same “parliamentary road” that has for decades been what Tótoro calls “a key mechanism used by the business parties to keep the Pinochet regime intact.” On the other side stands Chile in revolt, with the masses declaring, “It’s not about 30 pesos, it’s about 30 years!”

A dialogue presented in the name of “national unity” has produced an agreement with, as Tótoro denounced it, “a murderous government, with a president whose approval rating has hit rock bottom and who goes completely unpunished for human rights abuses, while propping him up as someone responding to the demands of the people.”

The misleaders of the Frente Amplio and the Communist Party will continue their betrayal in the form of a “dialogue” with murderers, while “the dictatorship endures”—a slogan found on many posters throughout Chile. But in Chile’s streets, where the brutal repression promises to continue, millions of people will be faced with their own choice about which direction to take. History shows that traps can only work so long.