This Friday in Santiago, Chile, tens of thousands of high school students, accompanied by teachers and workers, turned the city upside down to protest a rise in subway ticket prices. The right-wing government of Sebastián Piñera responded by declaring a state of emergency. Less than 24 hours later, the president was forced to revoke the increase. 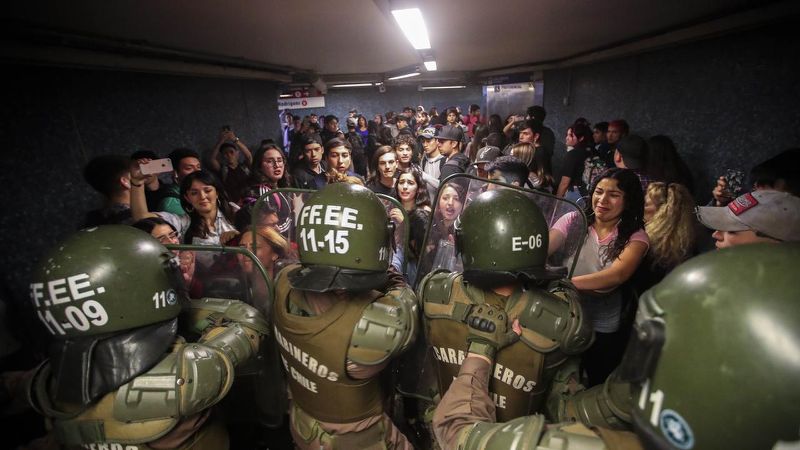 Since Monday, Chile’s capital, Santiago, has been shaken by massive demonstrations of high school students against a hike in the price of subway tickets. Students have been bursting into subway stations and jumping turnstiles, refusing to pay the fare.

The protests have since turned into a national political crisis. This Friday, high school students put out a call for a massive act of “evasion” (jumping over the turnstile) across the city. Tens of thousands of young people, teachers, and workers participated in the demonstration, causing many in the national press to call Friday’s events a true rebellion led by the youth.

Ideas for the next time the MTA goes after fare evaders or implements a fare hike? ? https://t.co/u63ZxiAjV8

The government responded by criminalizing the protests and repressing protesters. On Friday morning, the subway network of Santiago was militarized. The military police (carabineros) brutally attacked people with sticks, detentions, tear gas, and tear gas bombs. The management of the subway (which is privately-owned) suspended service in three of Santiago’s seven subway lines at 3pm. The result was a Friday of total chaos in Santiago.

After an emergency meeting in La Moneda (central government office), the Minister of the Interior and Public Security, Andrés Chadwick, publicly called the demonstrators “gang members” and said that the protests were organized by professional agitator groups. Using this as a justification, the government was able to invoke the “State Security Law” to legally excuse violent repression against demonstrators. This law, inherited from the Pinochet dictatorship, allows repressive forces to bypass ordinary laws and protections in order to arrest and violate individuals’ civil rights. In defense of the decision, Chadwick stated: “We condemn these acts of violence with all our energy” and that “as of today, we have strengthened the presence and staffing of police to protect the public order.”

Friday night, the government decreed a state of emergency. By Saturday morning Santiago was completely militarized. In response, spontaneous demonstrations known as “cacerolazos,” in which protesters bang pots and pans from their windows and in the streets, erupted in solidarity across the country.

Yesterday, there was a “cacerolazo” in Chile: people banging pots and pans in protest against the repression of student mobilizations. Students are mobilizing against transportation hikes. https://t.co/VvYRVHj73d

Larger mobilizations developed in other cities across the country in opposition to the state of emergency and the measures taken by the government to suppress the unrest. As workers, teachers, and others join the rebellion in the streets, barricades have been set up in some cities, blocking traffic. Protesters have even begun to call for Piñera’s resignation.

By Saturday night, less than a week after the initial protests broke out, President Piñera announced that he would revoke the ticket price increase in response to the mobilizations.

The protests have had widespread support among the Chilean working class. Before the fare hike, subway ticket prices in Santiago were already the highest in Latin America, at 830 Chilean pesos during peak hours. The increase in ticket prices has a significant impact on large sectors of workers; those who receive the minimum wage spend at least 15% of their total earnings on transportation costs alone.

In addition to the ticket price increases, in recent months workers have been faced with large increases in utility rates, such as electricity and gas. Earlier in the year, sectors of workers mobilized to demand the reduction of workday hours which have increased dramatically over the past few years.

Chileans are sick of low wages, long working hours, and high prices for transportation and other services. They are fed up with the fact that the government always responds with fierce repression in the face of popular demands. This newest rebellion expresses a deep social malaise in the country. Even with the repeal of the ticket price hike, it is unclear whether the protests will end here. The demonstrations could develop into a full-blown national uprising.

Students at the Forefront of Chile’s Class Struggle

The last decade and a half has seen at least two major eruptions of youth on the Chilean political scene. Both have threatened the current political regime, which is built on the legacy of the Pinochet dictatorship. Although the Chilean dictatorship came to an end in 1986, the laws, institutions, and the neoliberal economic model which sustained it remain intact.

The first uprising was during the so-called “Penguin Revolution” in 2006 in which high school and primary school students fought for the repeal of the Organic Constitutional Law of Education (LOCE). It guaranteed the privatization of education, a holdover from the Pinochet era. This struggle is known as the “Penguin Revolution” because of the black-and-white uniforms that high school students in Chile wore at the time.

The second uprising occurred in 2011 and was known as the “Chilean Spring.” Thousands of university students fought for months for public education, something opposed by the entire Chilean ruling class.

The events this weekend have shown that young people in Chile can once again take up demands that are in the interests of the entire population. As the government’s response has shown, the Chilean ruling class is afraid of this fearless youth.

Despite the state of emergency, The Confederation of Students of Chile (Confech) have called for a national demonstration next Monday in support of “the acts of disobedience that have been carried out” by high school students. The “Confech” is the institution that represents the great majority of college students in Chile. Additionally, an increasing sector of workers is joining the struggle; port workers have called for a general strike.

The hashtag #chiledesperto means Chile has “woken up.” The ticket price protests have stoked a desire in students and workers to fight against not only the fare hikes, but all the austerity measures of the government. Piñera was forced to back down to try to stop the full-scale rebellion which began to take form in the streets. But his backtracking may be too little, too late. Chile is awake. And it may fight for more.

This story is still developing. It was last updated at 6:30 on Saturday, October 19.