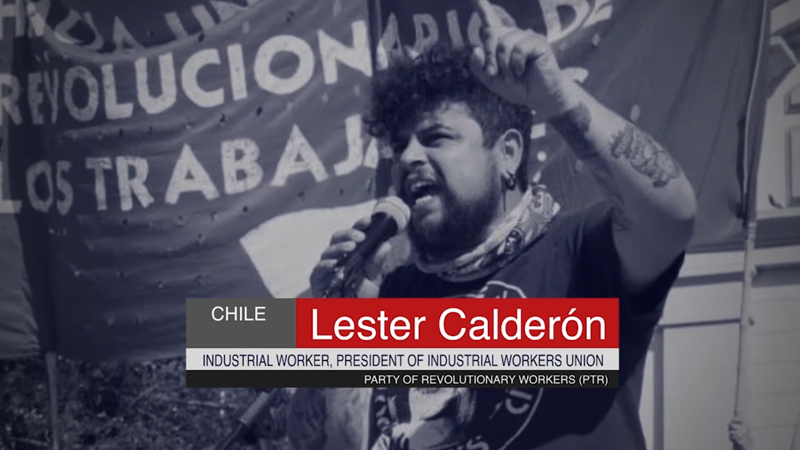 Lester Calderon is a member of the Revolutionary Workers Party (PTR) in Chile. He is an industrial worker in an explosives factory in Antofagasta and is a leader of the national confederation of metalworkers. During the recent Chilean uprising, he helped organize the Emergency and Protection Committees, bodies of rank and file workers and community self-organization.

I want to send greetings from Chile to all the comrades who are attending this international rally, because this May Day, more than ever, we’re demonstrating that the working class has no borders.

In Chile, we’re experiencing the escalating effects of the health and economic crisis, with hundreds of thousands of layoffs and suspensions, which shows that the demands of the October rebellion are more urgent than ever.

We took to the streets because our parents and grandparents were dying while they waited to receive hospital care from a healthcare system that has collapsed. In 2018 alone, about 26 thousand people on waiting lists died before they were able to receive care. We rebelled because our grandparents are forced to keep working until they die, thanks to a pension system that was put in place under the dictatorship.

In Chile, the people’s rebellion transformed the political agenda, and it put a stop to the escalating neoliberal reforms. Today, the government wants to capitalize on the pandemic to resume and expand these measures.

Piñera’s plan is egregious. They want us to keep working, forcing us to travel on crowded public transportation, while imposing a curfew between 10 p.m. and 5 a.m.. So at night we can be killed by the military, but in the morning we have to go out and work, taking the risk of being infected!

The administration has also approved a pro-business unemployment law that allows big corporations to suspend us without pay. And on top of all that, we have to cover our income with our own unemployment insurance, without the employers paying a dime.

The government thinks they have the upper hand, but they’re wrong. In our workplaces and in low-income neighborhoods, the people’s anger is building. It’s the same anger felt by our youth, who continue to fight against the murderous cops who act with total impunity. We are certain that, sooner rather than later, this anger will turn into resistance.

And we’re now seeing the first attempts at this in the protests of port workers and people in low-income neighborhoods. Healthcare workers have protested against the lack of protection and supplies that led to the death of a healthcare worker. This is what the workers did at the Barros Luco Hospital, whose struggle we’ve supported in every way we can.

Here in Antofagasta — a mining, port, and industrial city that was one of the epicenters of the people’s rebellion — we’ve promoted solidarity through the Emergency and Protection Committee, and we are also part of the coordination of unions like SGS Minerals, SGS Chile, and Buró Veritas, whose workers are struggling together against layoffs.

And, along with the Guanaco miners and teachers, the Orica workers’ union, of which I am a member, supported the struggle of the Antofagasta Hospital cleaning workers, who fought for supplies and clean working conditions — and won.

We’re also part of the struggle of the young workers in precarious employment at Starbucks and Burger King. We’re committed to promoting a big, nationwide movement against layoffs and suspensions.

To confront the plans of the government and corporations, the unity of workers, the unemployed and residents of low-income neighborhoods is essential. We also need to build an alliance with the students’ movement and the territorial assemblies and women, who took to the streets this year to fight for their rights and the rights of all workers.

On November 12 of last year, in the largest general strike in recent decades, we saw the potential of the working class when it is united with the people and the young front-line protesters.

The rebellion in Chile was one of the events that prompted the convening of the Left Front Unity’s Latin American Conference in Argentina, because — contrary to the assertions of those who believe that the right wing has to be fought by parliamentary and judicial measures — we’ve seen that the true engine of history is class struggle.

While millions were making history on the streets, the right was scheming in the parliament with the former Concertación (or Coalition) and the Frente Amplio (or Broad Front), in an attempt to deceive us into stopping our rebellion.

Now, along with the right, the Communist Party has voted in favor of the government’s Law on Suspensions. This party is the leading political force in the United Workers’ Federation, which many of us denounce today for its total lack of action. We are demanding that they put an end to the truce and fight against every attack.

Each attack that they let pass emboldens the right in its attempts to postpone the vote to change Pinochet’s Constitution, which they have suggested that the government could do under various pretexts. We oppose any attempt by the criminal government to postpone or cancel the vote  and extend the country’s militarization.

However, while denouncing these anti-democratic attempts, we have questioned this proposal that was born out of parliamentary schemes, because it doesn’t include the option of a truly sovereign Constituent Assembly, which is what the people have demanded in the streets.

It is only by fighting with the methods of the working class that we can achieve a Free and Sovereign Constituent Assembly that’s not subject to any authority [of the current government], and put an end to the legacy of the dictatorship.

We know that, in this fight, we will have to face the fierce resistance of capitalists, which can only be fought by the self-organized working class in an alliance with the people. That’s what we’re preparing for now. As a Party of Revolutionary Workers, we’re fighting to build a new left, a revolutionary party of the working class, a left that seeks to recover the revolutionary tradition of the self-organized Chilean working class that sought to radically transform society by building the powerful Cordones Industriales (or Industrial Belts) in the 1970s.

We’re doing this because we know that we have a long tradition behind us. And we know that in Chile, this party will emerge from a convergence of all those who have drawn lessons from recent struggles and want to share a strategy and program to fight for a government of the workers and against capitalism.

We’re fighting for what has been written all over this country’s walls: “for a life that’s worth living.” This can only be achieved by defeating this system, one that is at the service of large corporations, and putting an end to all forms of exploitation and oppression.