Chile: What Kind of Constituent Assembly is Needed?

In the last two weeks, more than a million people have joined protests against the government in Chile. One proposal for the way forward is to hold a Constituent Assembly and write a new constitution. But what kind of Constituent Assembly is Chile fighting for? Which basic measures need to be discussed and voted on in order to bring the legacy of the dictatorship to an end? 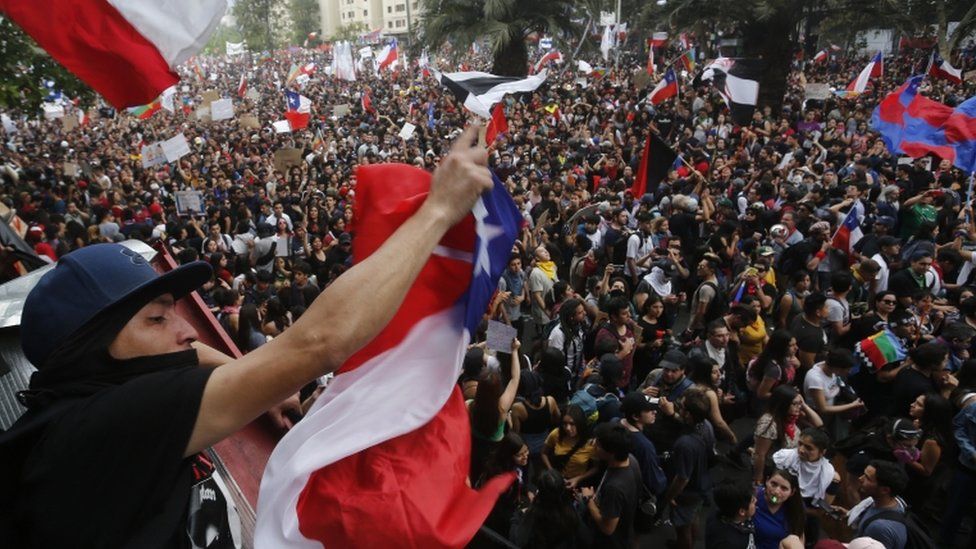 Can There be a Truly Democratic Constituent Assembly with Piñera and the Current Parliament?

The outbreak of the most important popular rebellion of the last three decades has called the Chilean “miracle” into question. These protests have placed Piñera in check and highlighted an enormous discontent with the legacy of the dictatorship and the regime that sustains it. Wages and pensions, precariousness, education, health and housing, working hours, the right to national self-determination for the Mapuche people, the destruction of the environment, among other issues; all are being questioned. “It is not 30 pesos, it is 30 years.” Working people want to decide.

Nevertheless, there are several traps that this regime with its old institutions wants to impose on us in order to get us off the streets and divert us into the dead end of the institutions that are inherited from the dictatorship. Can we believe that with Piñera in government, we will have a truly democratic Constituent Assembly? Can we confidently expect that a truly Free and Sovereign Constituent Assembly will come from the current parliament with its Chamber of Deputies and Senate, institutions that are rejected by the majority of the population and elected with less than 50% of voters taking part?

There will not be a democratic Constituent Assembly under this presidency, which grants Piñera monarchical powers, such as his personal decision to send the army into the streets under a state of emergency and to impose curfews; or under the Senate, an oligarchic institution that represents a small elite with a power of veto that limits the exercise of popular sovereignty; or under the Chamber of Deputies, which is made up of a caste of millionaire politicians at the service of big business. With these institutions we will not have a truly Free and Sovereign Constituent Assembly.

Not only did the Communist Party and the Frente Amplio (Broad Front) refuse to call for a general strike to throw out Piñera; they have also called for a “constituent process” that would maintain the old institutions of the regime. Will a truly democratic Constituent Assembly arise from the palace salons and parliamentary galleries? If this process does not liquidate the old regime, the plebiscites and town hall meetings will end up in the parliamentary swamp where our demands always run up against a brick wall and will continue to be ignored.

Who Would Convene a Truly Democratic, Free and Sovereign Constituent Assembly?

That is why our struggle to throw Piñera out with a general strike and impose a Free and Sovereign Constituent Assembly must aim to liquidate the powers of the old institutions of the regime, such as the current presidency and the parliament, that are inherited from the dictatorship.

Which Fundamental Measures Must a Free and Sovereign Constituent Assembly Discuss and Vote On?

Minimum wage and pension of $500,000 [Chilean pesos—around US$670], and indexed to the cost of living for a family. In Chile, 70% of the working class earns less than $400,000. No more starvation wages while big business enriches itself by the millions. An end to AFPs [private pension funds]. For a system of public pensions based on solidarity, managed by workers and pensioners, and with an 80% rate of return. Along with this, an end to precarious labor. No precarious “flexibility.” We don’t want any more first-, second-, and third-class workers. That is why we must fight for an end to subcontracting and all short-term labor contracts. Full-time work for all. Along with this, a reduction in the length of the working day, with no loss in pay. Divide all available work between the employed and unemployed in order to put an end to unemployment.

Free, democratic, and non-sexist public education that is in the service of workers and the people. An end to pro-business education and private, for-profit schools. For an end to the CAE [state-backed student loan system] and all student loans. For universal free education and the immediate cancellation of all student debts. We believe that health care must be public and free. We need to put an end to for-profit health care. That is why it is necessary to put an end to Isapres [private health funds] and all private health care.

For a public transport system managed by workers and users, one that is free for students and the elderly, and with fares that provide equitable access for the entire population. For a plan that guarantees decent housing for all working people. It is necessary to end real estate speculation by companies and banks, and to put an end to the housing shortage, with a state housing plan managed by workers’, residents’, and neighborhood councils.

Equal wages for men and women. For the right to legal, free, and safe abortion. It is inconceivable that those who decide to terminate their pregnancies should be imprisoned and punished, since this is a fundamental right of all pregnant women and anyone gestating. Today, they are forced to undergo clandestine abortions and risk their lives and their health. For the separation of church and state, and an end to all state subsidies to institutions of the church.

Trial and punishment for the civilian and military murderers and rapists who committed crimes under the state of emergency and curfew. Dissolution of Chile’s Special Forces and Carabineros [military police]. No more impunity, repression, and criminalization.

Nevertheless, Many Will Ask, Where Will the Resources to Pay for These Measures Come From?

There are resources. We are a country with many riches, but we have to put them in the service of all working people and the popular sectors. To achieve our aspirations we must strike at the interests of big business and multinational corporations, who enrich themselves by plundering our natural resources through the exploitation of our labor and the destruction of the environment. Without the resources that have been appropriated by a small minority, we will not be able to realize our aspirations. If the Piñera government and the old institutions of the regime are maintained, those resources will remain in the hands of those who now own the country.

That is why these elementary measures must be taken:

Nationalization of copper and strategic natural resources, with no compensation to the owners, under the management and control of the workers and  the communities. In copper alone, big multinational corporations like BHP Billiton and Anglo-American extract almost ten billion dollars per year from the country. In forest areas like Matte and Angelini, some of the richest landowning families in the country have appropriated the lands of peasants and of the Mapuche people. These lands must be returned to the communities. Along with the above, we have to nationalize the mines, the forests, and the salmon farms in order to put them in the service of the entire working class.

Reverse the privatizations of the dictatorship and the “democratic” regime that followed. Nationalization under workers’ control of the electricity, water, gas, and all public service companies. The increase in rates for electricity and other services result from the fact that these services are in the hands of multinational corporations who have benefited from their control of the state. The dictatorship, the right, and the former Concertación [coalition of liberal and center-left parties] all guaranteed these deals. Public services should be nationalized in the service of the working population and not for the profits of a few.

Expropriation of the ports without compensation, in order to strip groups like Von Appen or Luksic of their millions in profits. In cities such as Valparaiso, where the population suffers from unemployment, these resources could be used for a plan of housing and public works, as well as for health and education, both for that city and throughout the country.

If an emergency program like the one we are proposing is implemented, it will likely come up against the violent opposition of the big capitalists, who will defend all their privileges tooth and nail alongside their repressive state. That is why it is more urgent than ever to form assemblies and coordinating committees at workplaces, schools and universities, and in neighborhoods. These must be bodies of genuinely democratic self-organization, such as the Emergency and Protection Committee of Antofagasta, bodies of the rank-and-file who are opposed by the union and social bureaucracies of the Social Unity Roundtable, led by the PC and the FA.

These bodies are the only ones that can impose a solution that is favorable for working people and allow these emergency measures to be carried out. The struggle to defeat the resistance of big business leaders will form the basis for the struggle for a workers’ government that confiscates the wealth of the capitalists; a workers’ and people’s government that, based on the masses’ organizations of self-determination, can fully and effectively realize our social and democratic aspirations, and refound the country on new social bases.

This article first appeared in Spanish on 1 November on La Izquierda Diario Chile.