Teachers across Chile have been on strike for seven weeks now. What are teachers striking for and how has the government responded? 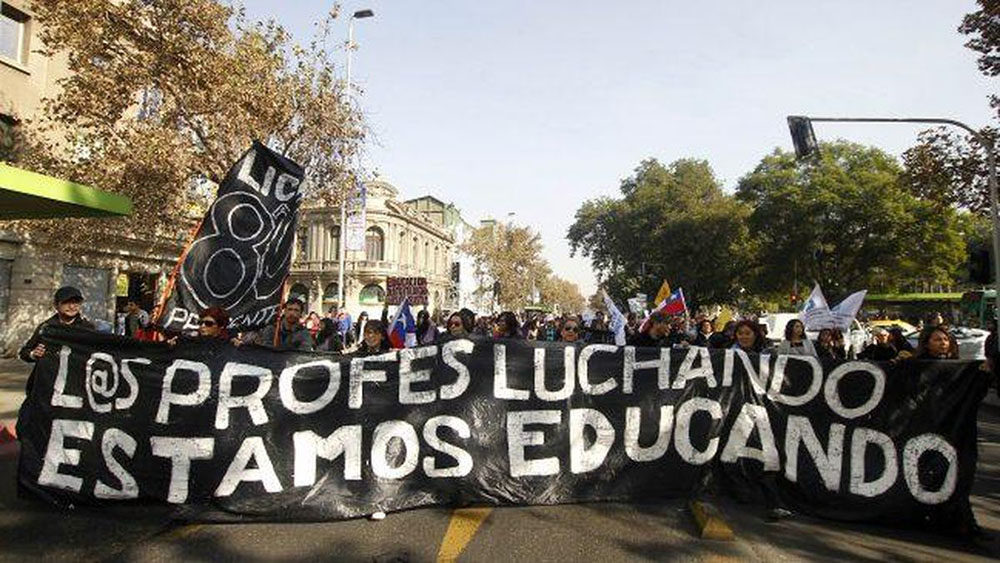 Left Voice interviewed Patricia Romo, president of the teachers’ union in Antofagasta, Chile. She is a language and communication teacher who was involved in the 2014 “rank and file rebellion,” in which teachers questioned the Communist Party leadership for calling off a strike while teachers wanted to continue fighting. After that, many rank and file leaders were elected to regional union leadership, and Patricia was elected president of the union. In May, the teachers went back on strike.

Tell me about the process of organizing the strike. What are the demands?

Teachers around the country have been on strike for seven weeks, and we recently voted to continue the strike. That’s 65,000 teachers striking. Seventy percent of public schools are on strike. The strike began after a year and a half of unsuccessful negotiations with the government. When the government walked away from the negotiating table, we went on strike.

The teachers have several demands, but here I’m going to mention just a few. To understand this, you need to understand that the Chilean teachers are paid in a really complicated way: It’s complicated for us, so I imagine it will be even more complicated for people in other countries. We get a base salary, and then we get bonuses based on things like seniority, degrees etc.

There is the demand from kindergarten and special education teachers who essentially aren’t recognized as teachers. They only make a minimum teaching wage without a bonus, which is essentially impossible to live on. Elementary and secondary school teachers, on the other hand, make a bonus for being certified teachers.

Needless to say, this is a deeply sexist arrangement, in which kindergarten teachers and special education teachers, who are 96% women, are hardly making enough to get by and aren’t considered “real” teachers. Yet they represent 12% of teachers. The government says it will re-evaluate this question in 2020. The teachers demand recognition and pay for kindergarten teachers now.

Another important demand is rooted in the history of the CIA-backed military dictatorship of Augusto Pinochet. The Pinochet dictatorship meant a huge rollback for workers’ rights. For example, in 1972, during Allende’s government, a teacher made $100 a month. Nine years later, teachers only made $28 dollars a month. In 1981, the dictatorship transferred the dependence of teaching personnel from the state to the municipalities and promised that this would result in workers making up the money they had lost. Most teachers didn’t see any of this money, a historic debt that the Chilean government owes teachers.

And the last straw is that the right-wing government of President Sebastián Piñera announced that at least three core subjects would be made optional, including history and physical education, for upper secondary education. This means the loss of thousands of teaching jobs. Piñera has shown great intransigence in reversing this measure.

Teachers work really long hours, not only in the classroom but also preparing for school. By law, we are paid for 35% of nonteaching hours. I am in a group of teachers called Our Class, and we think we need to fight for what we call 50/50: getting paid for our work in the classroom and outside of it, understanding that we spend equal amounts of time on both.

How did it go among the teachers, and how have the unions been involved? The students?

The current leadership of the teachers’ union is in the hands of the Frente Amplio, which is a broad organization of neoreformist political parties whose primary leaders came from the combative student movement. They came to leadership after a “grassroots rebellion,” which snatched the leadership from the hands of the Communist Party. The CP had notoriously betrayed a rising teacher movement during the 2014 mobilizations. This new leadership, led by Mario Aguilar, generated a rank and file expectation that teachers’ demands would not be compromised. But during the first two years of Aguilar’s leadership, he maintained a policy of truce where he subordinated himself to the government’s timeline, without carrying out the plans for upward mobilization voted in assemblies and waiting until the end of his term to call for the national strike.

Students and workers from different sectors of the economy have expressed solidarity with the teachers’ strike. For example, university students in Santiago created solidarity campaigns. In Antofagasta, teachers and miners mobilized together in the streets, and during a supermarket workers’ strike, workers and delegates spoke out in favor of the strike.

Yet, at the national level, the labor unions have not put their weight behind the teachers’ struggles. Although they are all facing similar austerity measures, the university unions (Confech), high school student unions (ACES), or multisector unions like the CUT have not attempted to unite forces in a great national strike for the teachers and against the different attacks that the government is imposing.

What was the government’s response, and what is the current situation?

Piñera’s government has been showing a particularly intransigent attitude toward teachers, who have closed the doors to the most heartfelt demands of the teachers’ strike, particularly the demands of kindergarten teachers. They are faced with a repressive agenda toward youth, with the criminalization of students through the “safe classroom” law, which is a law that allows students to be expelled from school without an investigation. This is a way for the government to persecute left-wing students and to weaken the most combative sectors of the student movement.

These latest measures have shown the most aberrant face of Piñera’s repression. Before the teachers’ strike, police violently entering classrooms at the Instituto Nacional, the high school with the most left tradition in Chile. Students had been protesting the “Safe Classroom” law and in retaliation, police entered the classrooms tear gassing students and destroying furniture while the teachers were teaching! Piñera’s government has declared war on the teachers’ strike with various statements and threats, and betting on a strategy of attrition despite being a weak government, which in the polls has 69% disapproval and only 23% approval.

They also seek to break the solidarity of any sector that can stand up in defense of education along with teachers, through a campaign to discredit the struggle of teachers.

How is education structured in Chile? How have government reforms made the education situation worse?

To install a neoliberal economic model, Pinochet’s dictatorship imposed a market-based education system, privatizing public education, which widened the class gap in education more and more. Now there are three types of schools: public (in the hands of municipalities and their private education corporations), private (private financing) and subsidized (mixed financing). The Bachelet government, as well as the right-wing Piñera government only deepened market-based education, generating complete generations of people indebted for education (university education is also privatized and has values inaccessible to the working class), and maintaining very high levels of oppression and labor instability among teachers.

There is a whole new generation of teachers who have been part of the struggle for education their whole lives. As high school students, we questioned privatized education and mobilized in what became known as the penguin revolution. In fight in 2011, as university students, we fought for free education. And today we continue to fight as teachers for public education and for better working conditions. This is a fight against the legacy of Pinochet’s dictatorship, and for free public education, financed entirely by the state, which is no longer at the service of big business and capitalists but of the needs of workers and the people.

What is the importance of building links between this movement and others, such as that of women, workers from other countries?

As they reach their seventh week of striking, teachers have deployed all sorts of initiatives that have helped bring the conflict to the fore. But the government is betting on attrition, and the minister of education’s intransigence demands a redoubling of the mobilization: For this, teachers must bet on adding more forces from other sectors and seek to articulate a solidarity that is expressed in action, in order to hit Piñera’s government with a productive strike that really seeks to affect the system. For this it is key that all organizations and movements make themselves available to show this concrete support, all the more reason, for example, the women’s movement that has come on the rise in recent years, since in the teachers’ union more than 70% are women, most of whom have double and triple working days and suffer all kinds of discrimination during maternity.

What can we workers in the United States learn from this struggle?

First, that teachers should be subjects of action that defend public education, but above all, understanding that these changes cannot be made by a union alone, even if it is mobilized and has the “sympathy” of society, but that with this same mobilized force, teachers must attend to the urgent task of linking with all sectors of education, especially with students and education workers. And finally that education is a right of all workers, and that to fight for it requires all the enormous force that these sectors can deploy. That there is no way for teachers to triumph without the broadest unity of workers and students. Allowing Piñera’s government to crush the teachers’ movement is a precedent for all the other attacks that the right wing wants to pass in Chile, such as labor reform and tax reform. To seek unity, and the articulation of a greater force, is to bet that teachers will triumph. And if the teachers win, we all win.