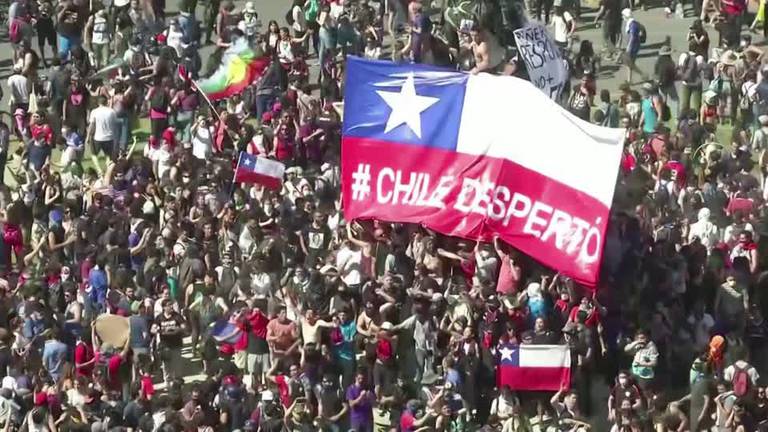 Update: On Tuesday, President Sebastián Piñera announced a set of measures that he called a “social agenda” to address the people’s demands. Among other things, he pledged to present bills in Congress to raise the minimum pension by 20 percent, to reduce the costs of drugs, to cut down the salaries of Congress members, and to increase taxes for higher income brackets.

This article was published today in La Izquierda Diario Chile.

On Wednesday, the sixth day of the ongoing struggle, the general strike called by the CUT and the organizations of the “mesa social” (“social board”) took place. More than a million people mobilized all over the country. We can hear “Fuera Piñera” more and more forcefully because, as is now clear, “Chile despertó” [Chile woke up].

An enormous social force of workers, youth, residents, women, and native communities mobilized in defiance of the government once again. Workers from the public sector and the health sector, teachers, miners, dockers, trade unions, and service workers marched with banners and flags. Hundreds of thousands of high school students, university students, and young workers took part in clashes in Plaza Italia and La Alameda, although overall the clashes were minor. It is a sign that there is a willingness to fight; there are the forces and energy to win, to continue the General Strike with mobilizations until Piñera falls, and to put an end to the state of emergency.

Piñera’s maneuver to deliver crumbs with a “social agenda” that does not solve the fundamental problems and that maintains the pillars of the dictatorship’s legacy has not managed to get us off the streets. His strategy of delivering small reforms so as not to lose everything is seen by millions as a trap set by the government and the parties of the old Concertación. The big businessmen, worried about losing their privileges, are putting pressure on Piñera to deliver these crumbs so that the rebellion does not threaten their interests.

While Piñera tries to deceive us with crumbs, he maintains the inexplicable, military-enforced state of emergency and curfews, which have resulted in dozens of dead in the streets, more than 2,400 arrests, and hundreds of beatings. There are increasing reports of torture in various places, such as the Baquedano subway tunnel. We don’t negotiate over our dead!

The Congress—that cave of thieves made up almost 80% of a caste of millionaire politicians from the right and the former Concertación at the service of the big businessmen, now falsely claiming to be “friends of the people”—has legitimized the curfews with the military in command. No trust should be placed in this parliament and its intrigues at the service of millionaires.

The Communist Party (CP) and the Frente Amplio, at the head of the CUT and other organizations, called for a general strike under pressure from the streets. They did so not to bring down this murderous government and this regime of impunity but to press for a “dialogue” and agreements with the old institutions of the regime. Now, they are calling on Piñera to dialogue with social organizations while the government continues killing, beating, and torturing protesters.

Although they formally denounce the current situation, the CP and the Frente Amplio are the “left leg” of this regime, and their policy is to ask for dialogue with the murderous government and “unity” with the old Concertación that is effectively keeping Piñera in power.

First, they said they would not dialogue if the military were kept on the streets. However, they quickly went to sit in Congress, as the Frente Amplio did on Sunday, when they discussed the suspension of the subway fare hike. The Frente Amplio even cast its votes legitimizing this operation while curfews spread in various regions from north to south. The CP, for its part, refused to vote on Sunday. But, although it protested yesterday with the Frente Amplio in the Chamber of Deputies, it still lent itself to this new maneuver: to discuss demagogic laws in order to divert the struggle from the streets to the parliamentary halls, while the people suffer the harshest repression with dozens of people dead and hundreds wounded.

While they spoke of a “legislative strike,” they lent themselves to this maneuver by legitimizing the parliamentary sessions with the military in the streets. Since they were in parliament, they were not in the streets accompanying the massive mobilizations, nor were they using their parliamentary weight to take the lead in this struggle, denouncing alongside the demonstrators the repression, the authoritarian government, and the traps of the regime. At the end of this historic day, the CP called on this same murderous government to establish a dialogue with them. They did not openly denounce Piñera’s crumbs as a maneuver made in the hopes of saving his crippled government, while keeping intact the pillars of the dictatorship.

Now the CP is threatening a “constitutional accusation” against Piñera. Will it be the reactionary Senate and its cliques, the same ones that voted for Piñera’s laws, that will overthrow Piñera? Revolución Democrática, for its part, proposes that [Minister of the Interior] “Chadwick resign,” without even touching Piñera. This policy only diverts the struggle from the streets to the halls of the millionaire politicians. They position themselves as the “left leg” of this regime, saving the government and the institutions that are oppressing the people.

If these parties aimed for the defeat and the fall of the government, as well as for putting an end to all the legacies of the dictatorship, they would help develop the energy and social force for a great general strike and for continued mobilizations until this is accomplished. Instead, their policy of dialogue does nothing but contribute to sustaining Piñera and the traps of the right wing and former Concertación parties.

We from La Izquierda Diario and the Partido de Trabajadores Revolucionarios (PTR, Revolutionary Workers Party) propose a completely different path: an active general strike with assemblies, “coordinadoras,” and with continuity, with mobilizations to La Moneda, until Piñera and this whole regime fall. Today, it has been demonstrated that there are forces to fight for that perspective. But the CP, the Frente Amplio, and the bureaucracies oppose this path. It is not a question of demanding “Piñera must go” to later reach an agreement with the old institutions and with the “opposition,” but to achieve its fall with the methods of class struggle.

We revolutionary socialists, who fight for a workers’ government that breaks with capitalism, know that this perspective is not yet shared by the majority. For this reason, we propose a democratic emergency solution: setting up a Free and Sovereign Constituent Assembly based on the fall of the government and the institutions of the neo-Pinochetist regime. The Constituent Assembly must be free and sovereign and it must decide all measures without restrictions of any kind. This assembly must have an elected and recallable representative for every 20,000 voters, and the representatives must earn the same salary as a worker. These representatives would discuss, without any obstacle, all the emergency measures that are needed for the benefit of the working people. In this Constituent Assembly, we would fight to impose a program with emergency measures such as a minimum wage and pensions according to the basic family basket, public transport managed by workers and users who decide the fares, free public health care and education, as well as the nationalization of copper under workers’ management, and other similar measures. It should also abolish the quasi-monarchical presidential position and the conservative Senate.

The current parliament is a cave of thieves at the service of corporate power that seeks to limit popular sovereignty in all possible ways. Today, true democracy and sovereignty are in the streets, and it is from there that all measures must be decided for the benefit of the working people.

We know that the big powers and businessmen will defend their interests with tooth and nail and will oppose the measures taken by a truly free and sovereign Constituent Assembly. That is why we must advance to constitute assemblies, “coordinadoras,” and committees from which the forces to confront the resistance of the bosses and the regime can arise. This can pave the way for the struggle for a workers’ government, in breaking with capitalism, in order to conquer our social and democratic aspirations fully and effectively. 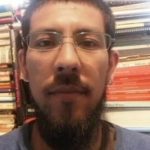