Civil Society in the Age of Austerity: Lessons from Italy

A recent study shows that forceful evictions in Italy have increased 13.5% since 2013. While more than 650.000 applications for public housing remain unprocessed, activists and local unions advocate for a political rather than charitable solution. 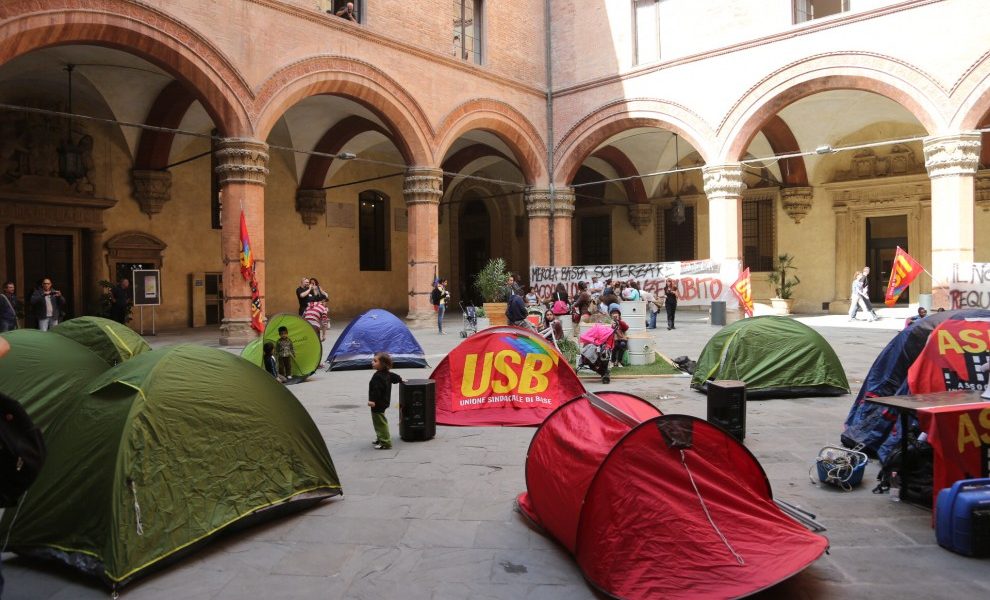 Bologna, considered the last bastion of Italian leftist activism, is currently witnessing an unprecedented scale of mass evictions of its housing occupations and social centers. A few weeks ago, a school occupied by roughly 50 people was forcefully evicted, leaving the occupants in a state of complete precariousness. This re-opens “eviction season”, provisionally halted only by the rough winter.

Last October, after having dismantled a historic LGBTQ center that was occupied for the last fifteen years, the town’s riot police proceeded to evict a roughly 300-person occupation hosting 120 Italian and migrant families from 17 different countries. Around 200 riot policemen were deployed to forcefully remove women and children, without sparing mothers or youth from a senseless spectacle of power.

While the authorities justify these evictions as a legal issue that must be protected to establish the ‘rule of law’, the ideological violence that underpins them is ignored in the mainstream discourse on housing and property rights. The re-appropriation of collective spaces in Bologna has involved the otherwise marginalized migrants and sectors of the poor, subjects usually divided by the ‘charitable’ mechanisms of a de-politicized civil society. The politicization of civil society movements and formation of independent solidarity networks, based on universal political rights rather than legal boundaries of citizenship and class, have irked authorities and provoked their wrath.

Any attempt to reach an agreement with the municipal administration has gone to waste because, according to the state institutions involved in the negotiations, “People want houses and refuse any shelter or assistance”. Herein lies the ideological and conceptual debate behind the recent clashes.

For a staggeringly large number of people in Bologna, it is increasingly difficult to find housing within the withering Italian welfare system. According to one study , 45 thousand families in Bologna are in a situation of “housing emergency”. Even more concerning is the reality that only 400 out of roughly 10 thousand housing applications are satisfied each year.

In relation to this, Bologna Mayor Virginio Merola stated, “Ours is a democratic politics, we go forward keeping together in solidarity and legality. There is no contradiction in working to ensure civil coexistence, humanity, and public order in the city”. This gives a clear message: resources, assistance, solidarity are reserved for those who don’t engage in illegal (political) action.

Yet, people are choosing to occupy buildings rather than live in shelters in order to show the urgency of a problem that cannot be solved through the usual assistance-logic of the municipality. They refuse temporary solutions such as shelters because they understand housing as a political, civil right rather than a gesture of state-charity.

Occupation residents get to live in modest, yet private spaces under the protection of activists who are sympathetic to their needs and who encourage them to lead participatory socio-political lives. These occupations are necessary because they humanize the needs of the marginalized, rather than brushing them under legal loopholes, or framing them as burdens for the state.

As stated in a press release by Antigone Emilia-Romagna , an NGO that provides legal support for occupation residents, “These daily police interventions don’t consider the social value of what they ultimately evict”.

Meanwhile, the sad blame-game between the city administration and police authorities over justifications and responsibility for the eviction has served to create a sensational distraction from the reason why these occupations exist in the first place: sometimes, there are no legal means to achieve a democratic end and a benign twisting of rules is the only method to disturb an unresponsive status quo.

Democracy, as Italians know it today, is a-political in the sense that it is reserved for the compliant individual and not for the resistant collective. It does not function to engage with the public, but rather to manage individuals who are bound by the legal doctrines of obedient citizenship. Thus, the tension between procedures and goals is one that needs to be urgently addressed.

While state power has become increasingly absolutist, the socio-political rights of citizens have become conditional. Regardless of the validity of the rights one is advocating for, being associated to the so-called “antagonistic forces” (such as social unions, student groups, and housing occupations), deems these groups unworthy of any political dialogue.

This, sadly, is the model of political action permitted by the self-proclaimed ‘renovators’ of Italian politics – a model that flaunts the rhetoric of solidarity and coexistence whilst hiding behind a double standard. The political principle of “larghe intese” (broad agreement), dear to the main parties in contemporary Italy, emerges from a desire to restore political stability, unifying forces across the political spectrum, crushing internal dissent and creating consensus over vague notions of common values. This populism has found one of its most vicious expressions in the evictions of housing occupations, presumably to be replaced by a political culture where civil society can only be allowed to function within an a-political and bi-partisan framework, whereby civil society is morally bound to assist without questioning the political reasons that brought the assisted to be in need.

And yet this very idea of civil society is inherently neo-liberal, as it seeks to create a mechanism of checks and balances ultimately between citizens and the market – where politics should not, and must not, play a prominent role. The state, as well as civil society, is relegated to a charitable role. It provides temporary solutions for those excluded, whilst waiting to reintegrate them in the same citizen-market relation. The housing shortage and rising unemployment, it is argued, are just symptoms of an unfortunate economic conjuncture, and ought to be treated as such. The civil society so created seeks to assist, to sympathize, but not to empathize. Too afraid of “the personal” as “political”, it misses out on a real opportunity for political integration.

Through countless hours of demonstrations, assemblies, occupations and evictions, trade unions and social centers have worked to build political alternatives to government policies that affect the most vulnerable segments of society. They have interpreted austerity as a political choice rather than an economic necessity and while the rule of law has been used to punish the victims of austerity who try to reclaim their dignity, the housing rights movement in Bologna has been able to mobilize strong participation, proving that politics is far from dead; it is the desperate need of those whose victimhood reflects the classist, ideological, and gender discriminatory dimensions of so-called ‘modern’, managerial states.

These movements are under severe attack because they have understood that labor rights, housing rights and citizenship/migration rights ought to be part of the same struggle, which is necessarily political. These grassroots unions have shown that aspiring to an atomized and de-politicized civil society is not only ineffective, but also counter-productive in the long run. Migrants, workers, pauperized citizens have come together in long-lasting occupations and mass protests because they have been encouraged to do so; to pursue their rights and struggles in a socially aware, politically active way. Any civil society that doesn’t acknowledge that this as an opportunity is inevitably destined to fail.
As written in an open letter by the young classmates of some of the child-evictees, “They’re evicting them because they didn’t have a permit to live there, but it’s just because they’re poor”. Even a child gets that.

Anna Calori is a PhD student at the University of Exeter. Her research focuses on labour and economic history of transition in the former Yugoslavia.