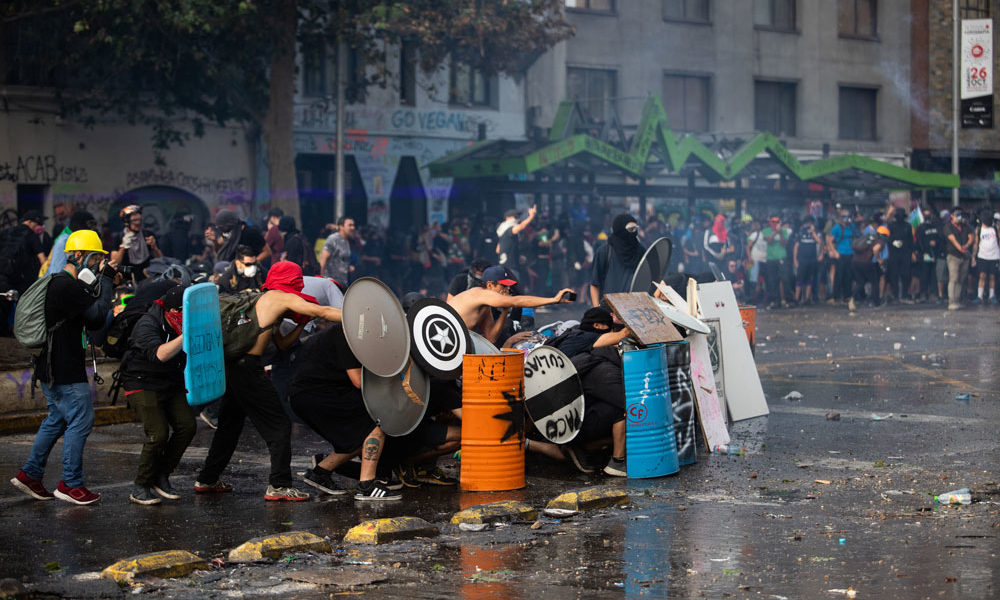 Class struggle is back. After many years of one-sided class war, working people across the world are rising up against the ravages of capitalism.

The opening shots were fired by the Yellow Vests in France. Sparked by rising fuel prices and austerity measures, this mass movement garnered international attention as protestors defied bans and injunctions, endured ruthless repression, and forced the government to retreat.

Get your copy of Left Voice magazine, which includes this editorial.

In late October, millions of people took to the streets of Chile. The trigger for this revolt was an increase in subway fares, but people on the streets chanted, “It’s not 30 pesos, it’s 30 years.” The movement is challenging the repressive neoliberal regime, passed down from the dictatorship of Augusto Pinochet. As this issue goes to press, a civic-military coup, backed by the United States, has deposed Evo Morales in Bolivia. But the popular resistance in El Alto and elsewhere is opposing the new, self-appointed authorities, having stemmed, at least for the moment, the advance of the right.

In Ecuador, Lebanon, Puerto Rico, and other places, movements started out with different demands but quickly began to confront capitalist regimes that cannot offer more than minor concessions. In the United States, one year after a wave of teachers’ strikes swept the country, workers at the iconic General Motors Company went on strike for 40 days—the longest strike at GM since 1973.

Come to the release party for this issue on Friday, December 13, at 6:30 pm at Starr Bar, 214 Starr Street, Brooklyn.

After decades of retreat for the left, working-class organizations need to be rebuilt or radically transformed and the idea of a classless society brought back into the imagination of working-class people.

Given this situation, the left needs to think the question of strategy. We can look at the experience of Salvador Allende’s government in Chile in the 1970s to critically assess the idea of a “democratic” road to socialism. Doing so will provide insights into the current struggles against the Chilean government. While the masses demand “Out with Piñera,” the Frente Amplio (Broad Front) and the misnamed Communist Party seek to negotiate with the government. Paying lip service to the mass demonstrations, these reformist parties seek to channel the popular outrage into an institutional, controlled process.

Meeting the demands of Chile’s workers, youth, and women will require more than the crumbs offered by Piñera. It will require severe measures against the big capitalists who control the country’s wealth and resources. This cannot be accomplished via state institutions inherited from the dictatorship. A realistic strategy for working people fighting for their interests inevitably involves a confrontation with the capitalist state and the construction of a new order based on workers’ power. Although still small and scattered, bodies of workers’ self-organization are beginning to emerge: council-like structures that link the different sectors in struggle and have the potential to form a new leadership for the masses.

The situation in Chile poses all the old questions of revolutionary strategy. This is at a time when many socialists in the United States—both former revolutionaries and lifelong reformists—have declared that revolution will never take place in a country where the bourgeoisie has long granted democratic rights. This is part of their justification for lining up with the candidates of the Democratic Party of the bourgeoisie. The current issue of Left Voice magazine is an attempt to combat this defeatism, providing concrete examples of how revolutionaries around the world are intervening in this new moment of class struggle, and putting forward concrete steps to rebuild a revolutionary left in the United States.

The new period that is opening up is pregnant with situations of instability, class struggle, and opportunities for the Left. Reformists will attempt to save capitalism in times of crisis. Now, more than ever, socialists need a clear strategy for building up working-class power.