Class Struggle, Not Court Struggle: The Folly of “Voting for Supreme Court Justices”

Liberals are trying to shame the Left into voting for Biden and Harris by claiming that Trump will pack the Supreme Court with anti-abortion zealots who will overturn Roe v. Wade. While such a scenario is certainly possible, this harm reduction approach to voting transforms important political questions into legal and technical ones and ultimately weakens the power of the working class. 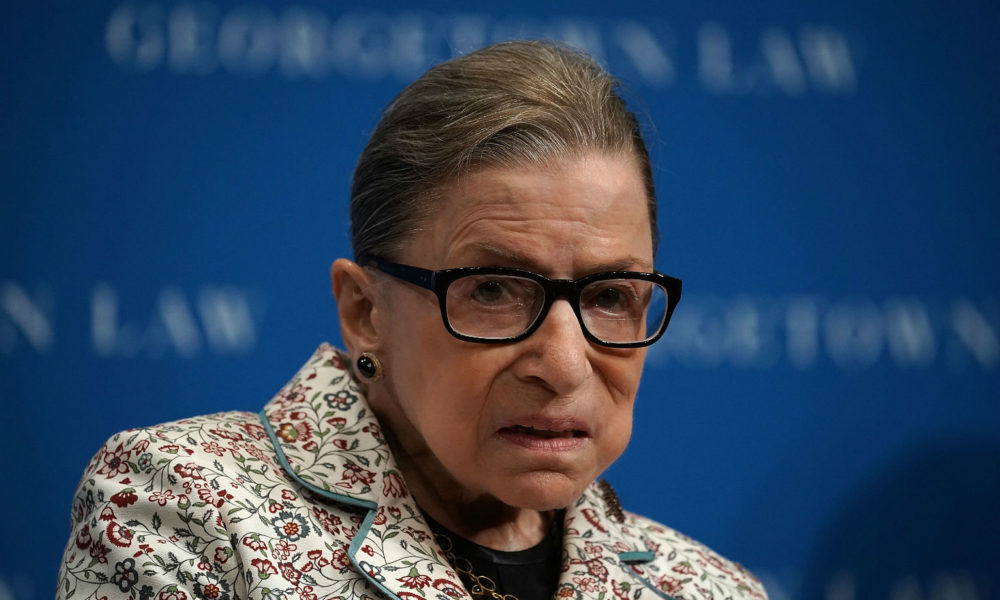 For decades, the threat of a conservative court overturning Roe v. Wade or other hard-fought progressive victories has been used as a cudgel to silence and shame the Left into supporting and voting for Democratic presidential candidates. And this election cycle is no exception. Almost on cue, liberal activists and pundits are playing the “Supreme Court card” in an effort to paint socialists and radicals as irresponsible idealists willing to sacrifice reproductive rights for the sake of ideological purity. Of course, nothing could be further from the truth. It is in fact the radicals, the socialists, and the Marxists who understand clearly that any right is meaningless unless it can be backed up with the kind of power that can’t easily be taken away. While the argument that such rights depend on the composition of the Supreme Court is deeply flawed, what most liberal advocates of this harm reduction approach miss is how the Court as an institution actively undermines the basic rights its defenders claim it protects.

While the Supreme Court is regularly presented as a protector and negotiator of basic human rights, it is and has always been a deeply elitist and undemocratic institution, designed to maintain the order and legitimacy of the ruling class. At its core, the court is little more than a small, unelected, and unaccountable group of Ivy League-educated lawyers, hand-picked by presidents with the “advice and consent” of the Senate, and instilled with the power to deem laws made by legislators unconstitutional. However, while this power itself undermines the very notion of a representative democracy, it is how the ruling class exploits the court to silence dissent that is most disturbing. Get in line, demobilize, conform unconditionally to the two-party system, or witness everything you hold dear being taken away from you. This isn’t a political argument; it is blackmail.

The lives and rights of women, workers, and marginalized communities should not be placed in the hands of what political scientist Louis Hartz called “nine Talmudic judges, examining a single text,” and history tells us that, in fact, they rarely are. While the court’s decisions can have a profound impact on the turn of events, it is ultimately the relations of class forces that determine our destiny. No judge can tell us what rights we do and do not have. Everything the working class has it has had to fight for, and everything we lack is the result of our insufficient mobilization. The narrative that leaves human rights in the hands of the courts and demands working-class obedience and demobilization is not only disempowering and undemocratic; it is inimical to positive change. The liberal vision of political struggle and history is narrow and reactionary precisely because it assigns to the working class — the primary vehicle of change — the role of mere spectator, with limited participation defined as casting one’s vote in bourgeois elections.

In all the talk about the importance of Supreme Court nominations, it is almost always in defense of Roe v. Wade that liberals urge a vote for the lesser evil. This is ironic, since Roe v. Wade was a weak decision that did not grant women actual autonomy over their bodies, and which, consequently, was further undermined by later decisions, including Planned Parenthood v. Casey. Although that later decision upheld Roe v. Wade, it also made it nearly meaningless for millions of low-income women by allowing such obstacles as waiting periods and “informed consent” (anti-abortion counseling) mandates, and by affirming the state’s power to restrict abortions after fetal viability. Today, despite the fact that Roe v. Wade remains the law of the land, restrictions on abortion access multiply like weeds, and abortion clinics are few and far between. In some states, women have to travel hundreds of miles and cross state lines just to get to an abortion clinic, often only to face hostile crowds, dehumanizing regulations, and sometimes impossible restictions.

The lesson here is clear: human rights are not something that can be granted (or taken away) by a handful of justices. They must be fought for and zealously guarded by working-class people every single day. While it is a fact that Roe v. Wade has drastically improved the lives of millions of women and working-class people in general, many have drawn the wrong lesson from the decision. Rather than seeing it as one step in the right direction, they infer that the Supreme Court is the main, if not the only, defender of democratic rights; and it is this erroneous conclusion that leads to demobilization.

Regardless of what our good liberal friends and relatives would like us to believe, the moral arc of the Supreme Court, simply put, does not bend toward justice. In fact, the Court is almost always several decades or more behind the needs and concerns of working people, and just as often at direct odds with them. For instance, it took a full 60 years for the Court to overrule the “separate but equal” doctrine established in Plessy v. Ferguson. And even when the court does act with some haste, its decisions are often ineffective and timid. In Brown v. Board of Education I, for instance, the Supreme Court deemed segregation unconstitutional, but just one year later, in Brown v. Board of Education II — unwilling to take on the executive branch, which was vocal in its criticism of the first Brown ruling — the Court instead directed desegregation to proceed with the carefully worded phrase: “all deliberate speed.” This put the onus on Black parents to challenge racist school boards in federal courts that routinely rule against working-class plaintiffs. Moreover, despite these historic cases that were meant to end school segregation, Black and brown children continue to be warehoused in grossly underfunded and vastly segregated schools, which often pale in comparison to the same public schools their white counterparts attend, sometimes just blocks away. Further, the Supreme Court has consistently ruled against legislative attempts to improve the lives of working people when they need it most, particularly in periods of great economic inequality, as during the late nineteenth and early twentieth century. Pollock v. Farmers Loan & Trust Co, Lochner v. New York, Hammer v. Dagenhart, and Adkins v. Children’s Hospital are among some of the better-known ones. In these decisions, the Court declared legislative attempts to regulate wages, working conditions, and child labor unconstitutional. More recently, Janus v. AFSCME shows that even 100 years later, we have advanced little beyond where we were during the first Gilded Age. According to Janus, even paying union dues is considered an affront to the Constitution.

As long as the working class accepts Supreme Court decisions as legitimate and turns to the courts for support in its struggles, its most pressing political questions and struggles will be transformed into legal and technical ones. This legalistic, technocratic approach to human rights is not only undemocratic; it is grotesque.

It is well-known, for instance, that Brown v. Board of Education ultimately produced little direct change in the system of racial segregation. Most legal scholars recognize its limitations, but argue that it signaled that the Supreme Court would support civil rights. The importance of the decision, therefore, was largely symbolic: it gave legitimacy to the civil rights movement, or so the argument goes. But legitimacy in whose eyes and for what purpose? Those who were fighting for racial equality did not need to be told by nine white men that racial segregation is illegitimate, and those who disagreed, such as white southern racists, needed to be fought on the ground, as they ultimately were. In the end, whatever desegregation was achieved was the direct result of the civil rights movement — a movement that certainly used Brown to its advantage, but that ultimately did not need the Court’s blessing to do what was right.

The argument put forth here does not intend to imply that who sits on the Supreme Court is irrelevant. Of course it matters. Supreme Court rulings make a difference. However, it is harmful to progressive change to silence opposition and destroy mass movements by appealing to the Supreme Court’s ultimate authority. We should not allow bourgeois politicians to dictate how and when we can mobilize for our rights, livelihood, and dignity in hope of achieving temporary and minor concessions.

Everything we have won has been the result of hard-earned victories by the working class, not gifts from the Supreme Court. And for every Brown vs. Board of Education, there is Milliken v. Bradley (a 1974 decision that reinforced white flight from urban areas to white suburban school districts); and for every Roe v. Wade, there is Planned Parenthood v. Casey (which, while reaffirming Roe v. Wade, represented a major legal setback to gender equality) and Bowers v. Hardwick (a 1985 ruling that the right to privacy didn’t extend to homosexual relations, and which took the Court almost 20 years to overturn, somewhat reluctantly).

Bourgeois politicians always take more than they give; and they offer just enough of a carrot to keep us subdued, for the fear of losing even the very little we’ve been granted. And so women have the right to an abortion, but this right is strictly regulated and access is difficult, if not impossible. Racial segregation is unconstitutional, but our schools and neighborhoods remain deeply segregated, and the kinds of reforms needed to make desegregation a reality are never on the table. This is the reality on the ground — a reality that should be unacceptable, but in defense of which Democrats ask working-class people to give up their formidable power. It is important to remember that the courts are ultimately weak because their sole source of power rests on their legitimacy, and that legitimacy, in turn, is grounded in the myth of political neutrality. In an attempt to avoid unwanted attention, the courts often trail dominant political alliances, social movements, and public opinion, as West Coast Hotel v. Parrish (a 1937 case upholding state minimum wage legislation) so aptly demonstrated. So, even within the confines of liberal democracy, our strategy must be that we build and they follow, not the other way around.

As Howard Zinn, among others, has argued, and as history has shown time and time again, real change comes only from mass organization, mobilization, and resistance. So the next time liberals try to shame you into voting for their candidates, tell them that we don’t want scraps from the master’s table at the price of disempowerment. We have a world to win, and we are not interested in the preservation of their status quo.