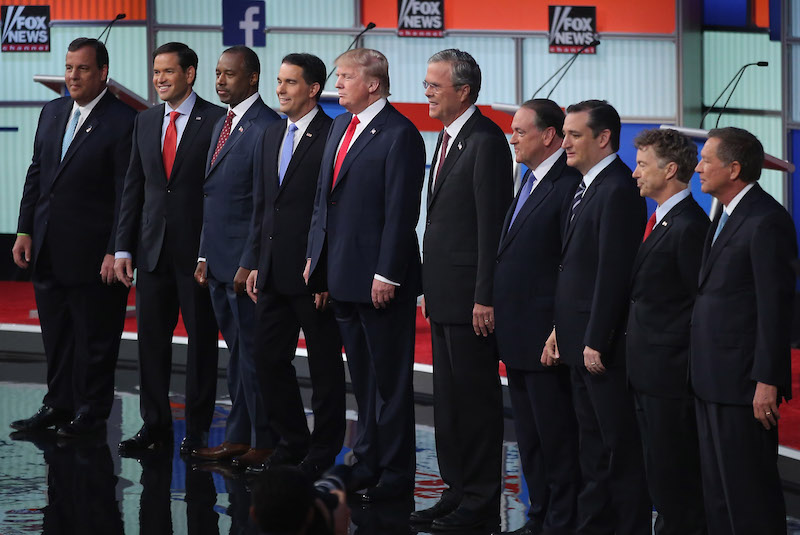 Candidates for the Republican Party’s presidential nomination faced off at the first debate of the primary season this Thursday evening at the Quicken Loans Arena in Cleveland, Ohio. The top ten highest polling candidates from a pool of seventeen debated various subjects, including women’s rights, immigration, foreign policy, government surveillance, and the future of Social Security. No candidate seemed to gain the upperhand in the debate, but all seeked to put forward their most conservative credentials.

Women’s and LGBT Persons’ Rights Once Again Under Attack

Candidates then began to address more serious policy issues. The question of women’s rights quickly came to the forefront. When questioned about his record of misogynic and disparaging remarks against women, Trump, insulting former talk show host and outspoken liberal Rosie O’Donnell and almost turning on moderator Megyn Kelly who dared ask the question in passing, announced that “the big problem this country has is being politically correct” and he does not “frankly have time for total political correctness”. His remarks were met with great applause from the audience.

Concerning abortion, the candidates affirmed their anti-abortion views, in some cases going as far as opposing abortion even when the mother’s life is in danger. “I believe an unborn child is in need of protection out there, and I’ve said many times that that unborn child can be protected and there are many other alternatives that will protect the life of that mother,” Walker appealed to evangelical conservatives, although he did not expand on what those alternatives may be. In June, as governor, he just signed into law a 20 week abortion ban that includes no exceptions for rape victimes or several fetal anomalies, an extreme attack on women’s right to choose in his state.

Seeking to distinguish themselves early on, other candidates also touted their anti-women stances. Referencing the recent accusations against Planned Parenthood, Huckabee attacked the non-profit organization by saying that it sold parts of aborted fetuses “like parts to a Buick.” Planned Parenthood provides reproductive health as well as mental and child health services to over three million women and children in the United States. Others rapidly joined in the chorus and all stated their intention to defund the organization if elected.

Illegal immigration and domestic surveillance in the crossfire

The candidates then turned to other questions of domestic policy, including immigration, government surveillance and the future of Social Security.

Jeb Bush took a more moderate stance by calling illegal immigration “an act of love.” He recognized that “the great majority of people coming here illegally have no other option. They want to provide for their family,” and called for a legal path to earned legal status and reinforced border control. As for Rubio, the son of two Cuban immigrants, he criticized current US immigration policy and stressed the need for reform and a simplification of the immigration process for those who wish to come to the United States through the “proper channels”. When moderator Chris Wallace asked Trump to justify his earlier comments about Mexican immigrants being rapists and criminals and his claims that the Mexican government was actively sending those immigrants to the United States, Trump defended himself by citing a trip to the Mexican-US border and vague discussions with board patrol, and even double downed on the remarks by calling for the construction of a wall along the border. Taking a more hardline stance, Walker explained why he no longer supported a path to citizenship for undocumented workers.

Undocumented workers make up about 5% of the total US labor force and have contributed billions to the profits of big business, notably in agribusiness.

Government surveillance was at the heart of Thursday’s debate. A heated exchange took place between Christie and Paul, which showcased two different positions on security and privacy that coexist within the Republican Party. Christie has been openly critical of Paul who opposes mass NSA surveillance. “I want to collect more records from terrorists, but less records from innocent Americans” said Paul. “That’s a completely ridiculous answer. How are you supposed to know?” asked Christie who highlighted his record as a former federal prosecutor in the wake of the September 11, 2001 attacks, which according to him illustrated the need for the mass collection of communication data. Paul used this to accuse Christie of “fundamentally misunderstanding the Bill of Rights” before suggesting that he go give Obama a hug since he trusts him so much.

Other questions of domestic policy were broached by the candidates. All the candidates, except Kasich, expressed their desire to repeal Obamacare, a republican talking point for the past few years. Christie defended the necessity of reforming Social Security by raising the retirement age and reducing pension benefits while Huckabee said that any reduction in retirement benefits was essentially stealing from the people. The candidates were also divided on Common Core education standards that are set nationally by the federal government and extremely unpopular among key republican constituencies like evangelical Christians, advocates of home-schooling and of states’ rights.

Foreign policy was also debated and candidates strongly criticized President Obama’s current policies. They painted the current president as a weak commander-in-chief who was putting the country’s national security at risk. The recent Iran deal came under harsh criticism. Huckabee expressed his concern about Iran’s promises “to wipe Israel off the map” and leaders who chant “death to America.” Yet, the hawkish rhetoric did not stop there. “The army is about killing people and breaking things,” explained Huckabee in a matter-of-fact way, referencing recent moves to put women move into combat positions, the end of the homophobic “don’t ask, don’t tell” policy, and the army’s financing of transgender surgery. Carson recognized that the US was militarily weakened from a decade of intervention in the Middle East, but criticized Obama’s decisions to not use military force against Syria and to ban torture techniques within the army.

Jeb Bush once again struggled to answer whether he believes his brother’s war in Iraq was a mistake. “Knowing what we know now with faulty intelligence and not having security be the first priority when we invaded, it was a mistake, I would not have gone in,” he admitted. Appealing to the families of soldiers whose lives were destroyed by the war, he affirmed that the American soldiers who died did not die in vain. But he did not expand upon this.

All agreed that ISIS was an imminent threat to US interests in the Middle East. Paul even went as far as saying that the US government and its foreign policy was responsible for ISIS before backtracking under pressure from other candidates. Presenting himself as a strong candidate for the post of commandor-in-chief, Cruz clearly stated that ‘radical islam’ was the main enemy and that he would employ the necessary force to defeat the Islamic State in less than 90 days.

The candidates avoided several major topics during the evening. Climate change was not mentioned a single time, despite Obama unveiling his Clean Power Plan this past week. Economic inequality was not addressed once by the candidates. Yet, the minimum wage has become a hot topic nationally with the successes of the FightFor15 campaign, the most recent wage increase being won in New York State . There was, however, a clear demonstration of the effects of this economic inequality on the US political process in which enormous contributions in the millions are feeding the electoral campaigns of top candidates in both the democratic and republican parties. Trump shamelessly admitted to using the country’s bankruptcy laws to enrich himself and to buying politicians: “Two months ago, I was a businessman. I give to everybody, when they call, I give. And when you know what, I need something from them. Two years later, three years later, I call them, they are there for me…” Just another illustration of the profoundly anti-democratic nature of the US political system dominated by the ruling 1%.

Candidates totally occulted the topic of #BlackLivesMatter. Moderators did ask one question concerning the targeting of young Black men by aggressive white police officers, but Walker quickly deflected it, stressing the need for better training and an even greater need for protecting the men and women who are just “doing their jobs.” When candidates have mentioned the movement in recent speeches, it has been to simply criticize or dismiss it, showing a patent disregard for the serious racial problems that persist in the US .

No clear winner emerged at the end of the debate. Candidates like Cruz, Walker, and Carson struggled for airtime and their presence was mostly testimonial. Trump and Bush’s performances were fairly mediocre, while Rubio faired better than expected.

What is clear, however, is that all the candidates are trying to appeal to the more conservative base in a context of growing political polarization. In a rather ironic closing scene, certain candidates stressed the need to unite the country after having spouted racist, sexist, homophobic, and anti-labor rhetoric for nearly two hours. No progressive solution to the problems facing working people, racial minorities, women and LGBT persons, or the youth in the United States is possibly on such a basis.