Cleveland State University student activists marched in solidarity with the nationwide #MillionStudentMarch to protest the current state of college education in the US. The march’s set of demands included an end to student debt, tuition-free college, and a fifteen-dollar wage for campus workers. 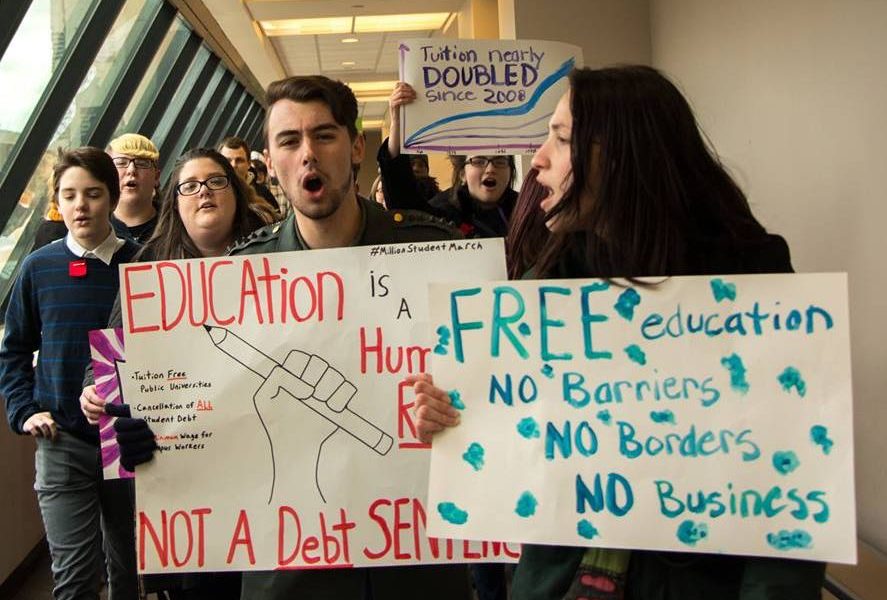 On Thursday November 12, approximately forty students from Cleveland State University attended a march organized by the CSU Student Socialist Society to protest the failings of the higher education system in the United States today. The action was the CSU contingent of the Million Student March, which took place in over 115 campuses involving thousands of students across the country. Participants everywhere pinned red squares to their clothes in solidarity with the student struggle that occurred in Quebec in 2012, and as a way to identify themselves to their student bodies. The national movement grew in response to the growing discontent many college students and prospective college students feel in regards to the US higher education model and how it functions as an element of the capitalist system.

One of the most prominent criticisms of the current US higher education model is the amount of debt that many incur during their school years to meet the cost of tuition. This cost has only increased over the years and many prospective students never attend college because of the fear of this debt. Criticism of this is also heightened by the increasing salaries of many school administrators alongside stagnant wages for campus workers, and a growing deficiency of tenure-track positions for many instructors.

The nationwide million-student march grew from radical student organizing on campuses throughout the country; the makeup of these groups was apparent in the demonstrations that took place on the 12th of November. Students on many campuses not only attacked the increasing usage of higher education as a means to make profit, but also stood in solidarity with a number of other causes, including justice for Palestine as well as anti-racism, with many marches explicitly stating their solidarity with the students at the University of Missouri.

At CSU, discontent with these growing trends is one of the driving forces behind campus activism. CSU president Ronald Berkman has come under criticism many times for utilizing school funds for various personal ventures, including a charter jet ride and payments on his Shaker Heights home. The lack of tenure-track positions for faculty members is another growing issue at CSU, with an increasing amount of classes being taught by adjunct instructors who often have to work at several campuses, and are usually hired on a semester-to-semester basis. In response to this, in April of 2015, CSU was the site of a rally for a 15 dollar an hour minimum wage in Cleveland. This rally not only was a demonstration for low wage workers and was supported by students from CSU and Kent State, but also adjunct professors who stood in solidarity with the demands for higher wages as well as union representation for all parties. This demand continues to be of significant importance and can be seen in its inclusion in the demands of the million-student march.

Although the political composition of those participating in the Million Student March varied, the march at CSU had a distinctly radical makeup, in part due to the efforts of the organizers. After marching through the campus and receiving a very sympathetic response, the students stopped in the student center courtyard for a series of speeches. Speakers noted how higher education has been increasingly utilized for the benefit of the capitalist classes and often leads to schools becoming more oriented towards developing an exploitable workforce, rather than a serious institution of learning. In response to the traditional argument of “fiscal responsibility,” speakers noted how their demands could be easily financed through a reduction of military spending or increased taxation on wealthy owners of capital.

After the speeches, the march continued on to the campus administration building, where they were confronted by campus security when they occupied the office of President Berkman, demanding to speak with him in order to present their demands. Berkman was however off campus and instead a meeting was scheduled to take place in December. The student protesters exited the building, some singing “The Internationale” as they departed.

Although the march has come to an end, students on many campuses are determined to make their demands a reality. Many organizations have grown in membership and gained valuable publicity that can be utilized to develop more effective movements. Also, the skills in organizing and networking gained by many students can be utilized in the future to continue to build radical student movements to challenge the institutions of the ruling classes. This movement hopefully will not only serve an example to those in other countries, as the Quebec movement has to US students, but also work alongside movements for economic and racial justice to develop a greater unified resistance to capitalism in the United States.

Patrick Mahoney is a Sophomore Political Science Major at Cleveland State University. He is also a member of the Student Socialist Society and Co-Chair of the General Outreach Committee of the Northeast Ohio Industrial Workers of the World.

The #MillionStudentMarch in other Universities:

Glimpse into the #MillionStudentMarch at #CMC. The full vid goes on for five minutes. pic.twitter.com/37ddAiaN5C