Closing NYC Restaurants Will Keep People At Home, But How Will We Pay Rent?

As restaurants and bars close in New York and other states to combat the coronavirus crisis, many workers are left without the means to take care of themselves and those that depend on them. Here is one food industry worker’s perspective. 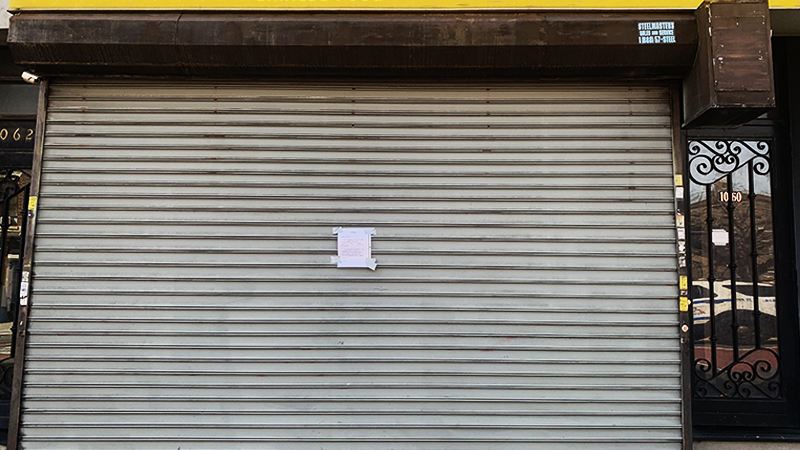 Over the weekend, Mayor Bill de Blasio announced that restaurants and bars must close to reduce the risk and potential spread of the coronavirus. On Monday, Governor Cuomo confirmed that all restaurants and bars will be closed indefinitely. This announcement is a joint action that is being taken in New York, Connecticut, and New Jersey as a tri-state emergency response.

These measures are crucial. The dire situations in Italy, Iran, and the Spanish State right now clearly indicate this level of urgency. As of Sunday, cases in New York state had reached 729, albeit a modest projection due to lack of early tests. In New York City, entertainment-related establishments such as theaters, museums, and cinemas have already closed, affecting thousands of workers. In addition to the closure of private schools and universities, public schools were also closed this week, following pressure from parents and organized teachers. These late measures come at a moment when NYC has 329 cases of coronavirus registered, five of whom have died.

But without defined dates of closure because of the actual outbreak and no mitigation plan, thousands of workers will face economic hardship. The New York State Restaurant Association and the New York City Hospitality Alliance are asking the government to apply measures to reduce the fiscal damages that businesses, especially small businesses, are facing. The situation is so complex that many small restaurants are encouraging their customers to donate money to support their workers.

How will I pay my rent? How will I afford medical bills?

Those are the questions that most of us restaurant and bar workers are asking now. Just a small percentage of workers are being given two to three weeks of paid leave. As there is no federal law that mandates restaurants and bars to pay sick leave, it rests upon each individual owner’s willingness to provide this basic right. And we all know how things work: we won’t get a cent. People either go to work sick to continue working at establishments that are offering  delivery and take out, or people stay at home without a job or income in a desperate situation.

The last report provided in 2018 by the Department of Labor shows that 315,200 workers work in the food industry in New York City, which demonstrates the huge impact that closures of this magnitude will have on the daily lives of so many. This is a sector where most employees are paid hourly, many depend on tips, and most live paycheck to paycheck. It is a tough industry; workers frequently have more than one job to get more hours and compensate for the low pay. It is also an industry that is well known for employing a lot of immigrants and being one of the main job resources for undocumented people. These jobs play a crucial role in providing an extra income for immigrants’ families abroad, who are also critically affected during this crisis.

The irrationality of the capitalist system is highlighted in this situation by suggestions like that of Whole Foods CEO John Mackey that employees should share their paid time off to help their co-workers through the coronavirus crisis. This is even more outrageous given that John Mackey’s net worth is $100 million since Whole Foods was bought by Amazon in 2017 for $13.7 billion. Jeff Bezos, the richest man on the planet, whose net worth is $111 billion, couldn’t resist buying a company that had $500 million in profits in 2016. They should provide PTO without hesitation, but even in crises like this one, they are still putting profits before our lives.

Without receiving pay, without savings, and without being able to apply for unemployment, when the landlord wants the rent, undocumented workers in particular face an impossible situation. This is why we must demand emergency universal paid leave for everyone.

We have seen this before

Memories from the 2008 crisis in the United States and other countries are still fresh. We saw how the state will urge to save capitalists without caring about the working class, even if that means thousands of people will be homeless while the real state complex and the CEOs of the big banks enjoyed enormous financial transfers from the working class into their own pockets. Most of the landlords and bankers have been raking in big profits through this whole last period, but in the current crisis people are still waiting to have their payments for credit cards, student loans, cars, and utilities suspended. Halt all rent and mortgage payments to wealthy landlords and banks!

Common sense would suggest  that all hospitals infrastructure should provide free and public universal healthcare now. However, profits are still the main priority for the rich, and the state continues to protect their business. The response of the state is so behind that Immigration and Customs Enforcement officers are arresting undocumented people who went to hospital for a coronavirus test.

Despair is not an option

The offers of support among restaurant and bar workers are inspiring. The first messages of solidarity came from our co-workers and friends. Those of us who are in a position to do so have not hesitated to offer food or money to support others who find themselves in worse situations. Many small business owners keep their businesses closed for several weeks while trying to get the funds to afford it. But this won’t be enough; sooner or later we will have to organize ourselves and make demands. A recent survey showed that “some 18% of adults reported that they had been laid off or that their work hours had been cut.” This is affecting our communities, our neighborhoods, and our fellow workers in every industry.

The coronavirus crisis has exposed the fact that millions of people labor under precarious working conditions while lacking basic rights like paid sick leave. The crisis has also demonstrated that the U.S. healthcare system is driven by profits, endangering the lives of large sectors of society, especially those of the most vulnerable populations. We need to learn lessons from this traumatic experience to challenge a system that time after time shows us how rotten it is. Our lives are worth more than their profits.

Read more here: A 10-point Emergency Program to Tackle the Coronavirus Epidemic in the U.S.