From Vietnam to Nicaragua to Panama to Iraq, Colin Powell has played an important role in imperialist violence for decades. Don’t mourn his death. 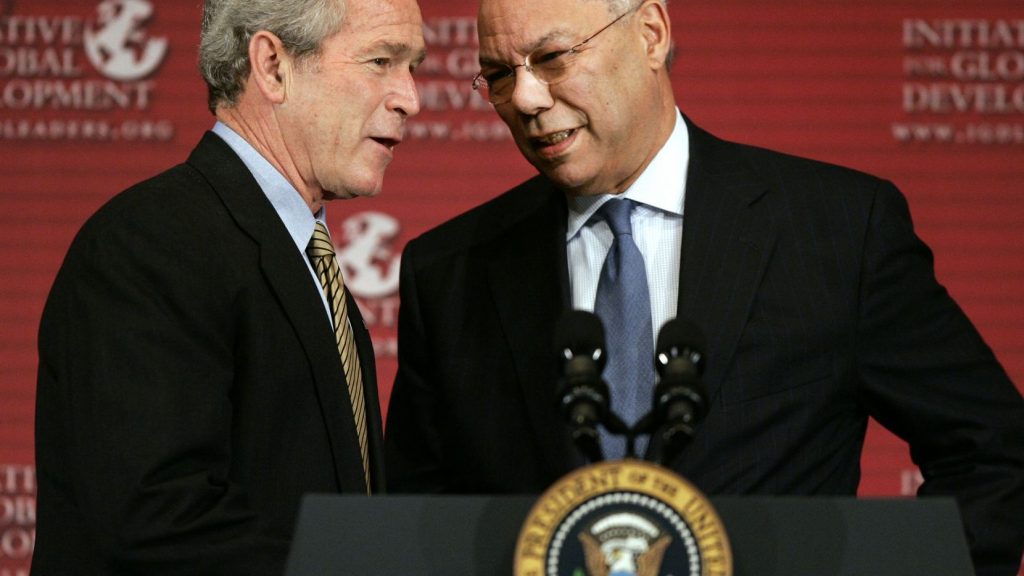 Colin Powell, the first Black Secretary of State, is dead at age 84, apparently from complications associated with the coronavirus.

For years, Powell has been portrayed as a hero who just lost his way. If he had any faults, it was his loyalty to George W. Bush (whose legacy also was seemingly scrubbed clean in recent years).

But we must be clear about exactly who Colin Powell was. He was a war criminal. He was a warrior of U.S. imperialism at every step of the way, which means that in no uncertain terms, he was a mass murderer. But this isn’t about Colin Powell as a flawed individual; it’s about an imperialist, capitalist system that uses people like Colin Powell to execute brutal policies and build support for those policies.

Colin Powell had a long career in which he implemented key imperialist policies — from Vietnam in his youth, to working with Ronald Reagan and both Bush presidencies. His imperialist record is too long for this article, but here are some highlights:

Colin Powell was a senior tactical adviser during the Vietnam War, where he committed numerous brutal war crimes. In his memoir My American Journey, Powell explains that he led South Vietnamese soldiers in an attack on a village full of families, elderly people, and other non-combatants:

The people had fled at our approach, except for an old woman too feeble to move..We burned down the thatched huts, starting the blaze with Ronson and Zippo cigarette lighters….[because]Ho Chi Minh had said the people were like the sea in which his guerrillas swam … We tried to solve the problem by making the whole sea uninhabitable.

Powell also stated that “If a [helicopter] spotted a peasant in black pajamas who looked remotely suspicious, a possible MAM, the pilot would circle and fire in front of him. If he moved, his movement was judged evidence of hostile intent, and the next burst was not in front, but at him.”

These were not violent tactics that Powell himself invented, of course; it was the strategy of the United States in the war. And of course, Powell executed that strategy well, rising through the ranks of power.

Powell was top deputy to Secretary of Defense Caspar Weinberger during the Reagan administration and was involved in the Iran-Contra affair, in which the government funded the brutal, right-wing contras in Nicaragua. The contras killed around 30,000 people, though Reagan referred to them as, “the moral equivalent of our founding fathers.” Many targets of contra violence were civilians, including children, and before being murdered, the Contras would often subject their victims to torture, sexual assault, and other dehumanizing atrocities.

Then, as Chairman of the Joint Chiefs of Staff under the first George Bush, Powell led an invasion of Panama in 1989, in which at least 500 Panamanian civilians were killed in a two-month blitz. Even the U.S.-dominated UN General Assembly, which nearly always covers up and excuses the brutality of the U.S. empire, considered this action illegal.

Though Powell had a hand in imperialist violence throughout his career, he is best known for his role in the Iraq War, which killed an estimated 275,087 to 306,495 people, according to the Costs of War Project. It was Colin Powell who went to the United Nations, with clips that were played on every news station over and over, and made a case for the Iraq war in front of the world with what he knew were lies. He directly fabricated evidence in order to build public support for the Iraq War, which was never about terrorism, or safety, or even weapons of mass destruction. It was a war for oil and a war that guaranteed massive profits for the U.S. defense industry.

Throughout his career, Powell was trotted out as evidence that we live a post-racial society. He served as a token to show that racism is over and inequalities were just the fault of individuals. This has been a strategy usually used by the Democratic Party, but the Republicans also dipped their toe into “intersectional imperialism” with Colin Powell.

Without a doubt, Powell reaching the highest posts of government is a result of Black people’s struggles for civil rights. When asked about figures like Condoleezza Rice and Colin Powell,  Angela Davis says, “It is inconceivable that these individuals would be where they are now, without the pressures of the movement for civil rights and racial democracy, so it appears a contradiction that people of color can play major roles in sustaining contemporary racism.” And yet, as Davis explains, these figures play a central role in sustaining systemic racism and imperialism.

As we have seen over and over and over, representation is not liberation — from Barack Obama, to Colin Powell, to current Department of Homeland Security Secretary Alejandro Mayorkas. Representation within the Democratic and Republican Parties is just a token with which to pacify dissent and win consent for the brutality of the U.S. empire. It is a way to gain support for the system without actually making any changes. The Democrats in particular have used a politics of representation to pacify movements — from Civil Rights, to the feminist movement, to Black Lives Matter — to pacify, demobilize and co-opt movements, rendering them entirely inoffensive and even helpful to the regime.

While role models and representation are indeed important, there are countless anti-imperialist and anti-capitalist Black folks to look up to. While Colin Powell was murdering Vietnamese people, Muhhamad Ali was going to jail saying,

My conscience won’t let me go shoot my brother, or some darker people, or some poor hungry people in the mud for big powerful America,” he had explained two years earlier. “And shoot them for what? They never called me n***, they never lynched me, they didn’t put no dogs on me, they didn’t rob me of my nationality, rape and kill my mother and father. … Shoot them for what? How can I shoot them poor people?

The Rebranding of Colin Powell

In the coming days, there will undoubtedly be much public mourning for Powell by capitalist politicians and the bourgeois media. This will be done not only by Republicans, but by Democrats of all stripes. After the Bush presidency, Colin Powell went through great pains to rebrand himself as a “good” imperialist. In an attempt to whitewash his integral role in the invasion of Iraq, he repeatedly claimed that his support for the war “haunted” him and was a “blot” on his record. He distanced himself from President Trump, claiming that he did not vote for him in 2016 or 2020, and even gave a speech at the Democratic National Convention in 2020. Following the Capitol riot in January, Powell even said that he could no longer call himself a Republican. Democrats played a major role in rehabilitating Colin Powell, just as they have done for former President George W. Bush.

And certainly, many people have bought Powell’s rebranding. In fact, Jamaal Bowman, a “progressive Democrat” and DSA member in the House of Representatives, has already tweeted:

“As a Black man just trying to figure out the world, Colin Powell was an inspiration. He was from NYC, went to City College, and rose to the highest ranks of our nation. Sending love, strength and prayer to the family and friends of Secretary Powell. Rest in power sir.”

Despite rhetoric to the contrary and being a central public figure for the DSA, in the end Bowman is on the same side as Colin Powell: the side of capitalist imperialism.  Bowman came under fire just a few weeks ago for voting in favor of funding for the Israeli Iron Dome and previously voted for more military aid to Israel, as well as increased funding for the Capitol police.

Without a doubt, Colin Powell was an imperialist and a war criminal. His active, central role in imperialist violence across the globe should not be minimized. However, this might lead us to believe that Powell was just a bad guy — if only we could have had a better person in his place, then none of this would have happened. But that’s not how it works.

As Lenin writes in Imperialism, imperialism isn’t actually a “policy choice” but rather integral to the capitalist system in which we live. It’s not a policy chosen by states, but is instead a system that goes hand in hand with capitalism. It includes not only the brutal war crimes that Colin Powell committed and the lies he told, and not only the bombs dropped on a regular basis by the United States, but also the economic policies by the U.S.-led IMF and World Bank of debt and privatization and funneling money back to imperialist countries.

Imperialism occurs not “out of particular malice,” as Lenin explained, but because violent methods are “needed” by the capitalists and their governments to ensure more profits. That’s what, in the end, the Iraq War was all about. And it’s true for all stripes of Democrats and Republicans — that’s why Bowman joined Republicans in Iron Dome funding, and why AOC voted present. It’s not necessarily malice; it’s what keeps the system running.