Colleges and Universities Poised To Repeat The Coronavirus Surges of 2020

As the Delta variant continues to spread and cases of coronavirus in the United States climb to levels not seen since February, many colleges and universities are nonetheless preparing for a year of in-person learning. 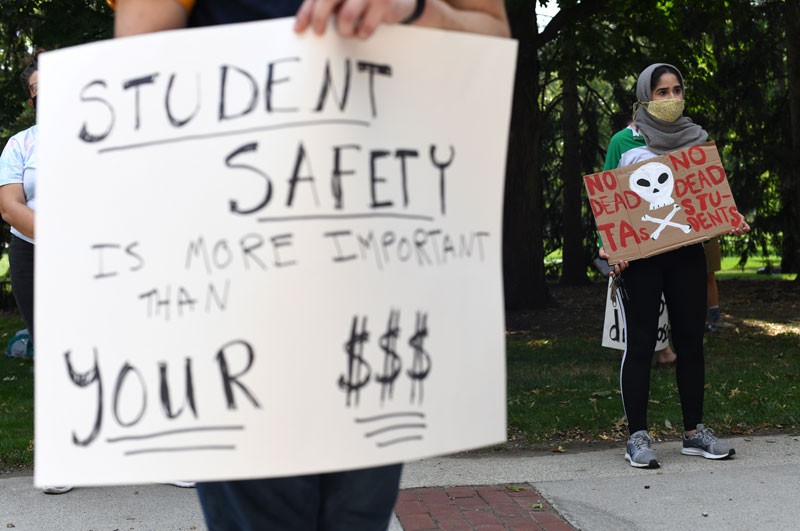 Students, staff, and faculty at colleges and universities across the country are getting ready for the beginning of the second full school year of the pandemic. Some students have already begun to move into their dorms. Meanwhile, the seven-day average of new cases in the United States is nearly double what it was this time last year, or approximately at the same level as last November. In some states, such as Florida and Louisiana, rates of new daily cases are the highest they have ever been now that the highly contagious Delta variant is the predominant strain in the United States.

Despite these numbers — and cases are still only trending upward — many colleges are going into the new school year with increased in-person capacity and fewer safety restrictions compared to last year. In August 2020, public universities in North Carolina planned for a largely in-person semester with a statewide mask mandate, yet UNC-Chapel Hill and NC State University were among the first schools in the country to return to online learning after less than a week of classes. Now, with the statewide mask mandate discontinued and the number of cases in North Carolina nearly double what it was this time last year, the schools are poised to repeat last year’s fiasco. In fact, UNC-Chapel Hill just announced its first on-campus outbreak on Wednesday.

These policy differences are largely predicated on the protection of the vaccines. Many schools, including the UNC system, are requiring students to either submit proof of vaccination or get tested weekly in order to attend in-person classes. While it’s true that the vaccines are highly effective at preventing hospitalization and death from Covid-19, preliminary data shows that the Pfizer vaccine is only somewhat effective (about 40%) at preventing all infection, with equivalent data on the other vaccines — and how efficacy changes relative to Delta and other variants — still forthcoming.

Additionally, research shows that fewer Delta variant particles are required to cause infection, which means it’s easier to contract, and that vaccines do little to prevent transmission. This is particularly relevant for school settings, in which people are close together for several hours at a time, often in buildings with poor ventilation. Others have noted that even a “mild” or “moderate” case of the coronavirus that does not require hospitalization can still be devastating, including the risk of Long Covid, which often causes long-term problems with cognitive functioning and fatigue, both of which affect learning.

A related problem is that due to the perception of safety afforded by the vaccine, colleges and universities are discontinuing safety protocols like social distancing and contact tracing, as well as some of the accommodation policies that had been implemented during the 2020-2021 school year. At Fordham University, all faculty and staff are required to work in person this fall, and those who are not vaccinated and are not approved for an accommodation will be forcibly placed on unpaid leave. In the City University of New York system, remote work accommodations have been left to the discretion of individual supervisors, with some reports of accommodations getting rejected by HR even after a supervisor has agreed, and some staff who live with people who are especially vulnerable — such as immunocompromised family members or children not yet eligible to get a vaccine — have been told that they need to come to work in-person, putting their family members at risk, or quit.

Other universities, however, haven’t implemented any vaccine requirement at all. In fact, the governors of Texas and Florida have gone so far as to ban public institutions, including schools, from requiring vaccines. At the University of Minnesota, faculty are considering a work stoppage, should other tactics to demand a vaccine mandate fail.

Many colleges and universities have continued to set aside portions of their on-campus housing to serve as quarantine dorms for students who test positive and need to self-isolate. However, Florida State University (FSU) was ordered by the governor to return to full housing capacity, which means there will be no space for students living on campus to quarantine. The official university policy is that “students who test positive will need to return home or find their own isolation space off campus.” Not every student has the financial means to return home mid-semester or rent a hotel room for an extended period of time. For those who live far away, returning home could also mean the choice between knowingly bringing the coronavirus onto an airplane or driving for an extended period of time while sick. While FSU’s quarantine dorms last year were famously filthy and did not even provide water to students, the students at least had a place to go. Now, anyone in the dorms who tests positive will simply be evicted.

As of this writing, the CDC’s website offers contradictory information about masking guidance in higher education settings. On some pages, the website says they recommend “universal indoor masking for all teachers, staff, students, and visitors to schools, regardless of vaccination status.” In other places, they say this only applies to K-12 schools. And in still other places, they say they recommend universal masking in all public indoor spaces in areas with “substantial or high transmission,” which currently means 88 percent of all counties in the United States.

The push to return to in-person learning is part and parcel with the push to “reopen the economy.” University systems are often some of the largest employers in their respective states, businesses in college towns rely on the spending of students, and the preponderance of public-private partnerships, in the research sector but also in how many universities hire contractors to provide food and cleaning services on campus, means that there is a significant amount of profit to be made off of education.

Universities are employers and university administrators are bosses, and they serve the interests of the bourgeoisie like any other boss. The “Ivory Tower” stereotype of universities as spaces that allow their denizens to rise above the material conditions of the world is a myth for all but the most privileged tenured professors at elite institutions. More than three quarters of all faculty aren’t eligible to ever receive tenure, and more than half of all faculty are highly-precarious part-time workers paid on a per-class basis. For students, universities are mechanisms for bourgeois gatekeeping. Access to higher education for women, for everyone who is not white, and for working class people had to be fought for via struggle, and the universities fought back. As much as a college education can be a gateway to better material conditions for some, the function of universities is still to filter the population in order to keep wages down and train workers with new skills so that we can generate profit for the capitalists more efficiently. This is not what the function of universities should be, but it is the purpose they serve under capitalism. Universities don’t care about protecting students and workers any more than corporations do.

Returning to or continuing in-person learning as Covid-19 cases climb once more primarily serves those at the top while disproportionately harming students and workers, particularly workers who are disabled, lack job security, and/or have young children. Even at schools where faculty were allowed to choose their teaching modality, part time, non-tenure-track, and graduate student workers have been disproportionately pressured into closing their Zoom windows and returning to the classroom.

The specific requirements for a safe reopening will vary based on each school’s material situation, including the spread of Covid-19 in its specific community, the amount of space and quality of ventilation in the school’s building, and whether or not students live on campus. However, all schools should provide free and easily accessible Covid-19 testing to workers and students, full paid leave and/or the option for online work to anyone who needs to stay home for safety reasons. All other decisions should be made not by university administrators and bourgeois government agencies, but by the faculty and staff of each school, in consultation with healthcare professionals, scientific experts, and students.