Collision Course: Why Electric Vehicles Will Not Save the Planet

President Biden has made electric vehicles a major part of his environmental platform. Here, Ashley Dawson explains why such narrow technological fixes are unlikely to make much difference. 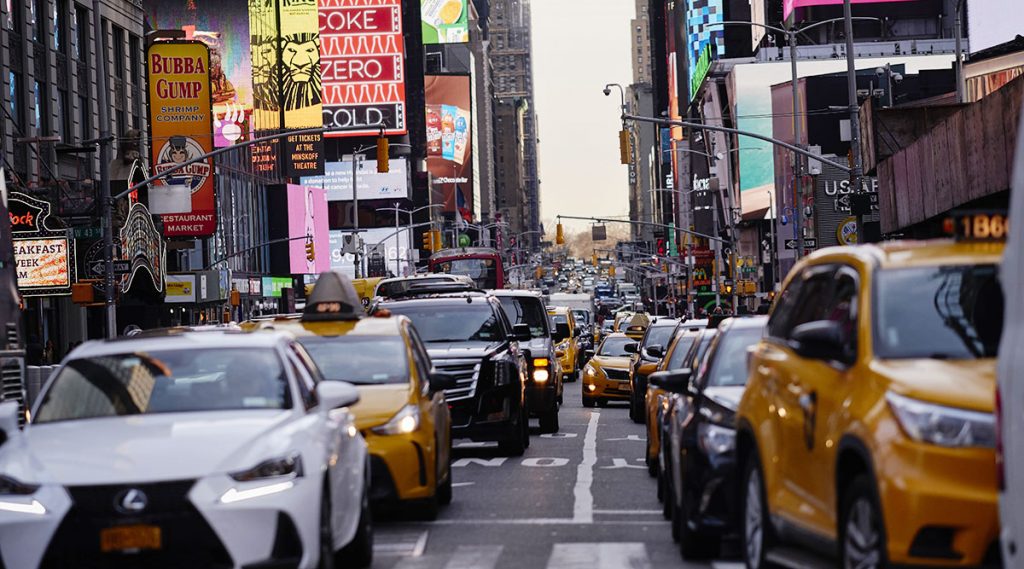 This article originally appeared on the Thought Project blog on February 1, 2021

The streets of Jackson Heights, epicenter of the pandemic in the country’s worst-hit city, were eerily empty last spring. People ambled along roads once ruled by aggressive automobiles, their freedom in the streets interrupted only by the sound of sirens, tokens of otherwise invisible sickness and death. New York City was turned into a ghost town as people locked down, businesses were shuttered, and the rich cut-and-ran to their country homes. It was a terrifying time, and not only because of the mass death that stalked the city: long breadlines began forming in outer boroughs like Queens and the Bronx, where “essential” but ill-payed workers live in dangerously cramped quarters. Cities like New York, stratified by extreme inequalities before the pandemic, saw economic life dropped off the face of a cliff. And then the streets filled with protesters as people rose up against police brutalization of communities of color, which never let up despite the pandemic.

In the midst of all this fear and suffering, though, there was one hint of a possible better future: the rumbling of airplanes taking off and landing at LaGuardia Airport was silenced. With these audible portents of ceaselessly accumulating carbon emissions banished, the skies cleared of contrails and the stars shone down at night. It felt as if the deep crisis in the present had blessed us with an at least temporary reprieve from climate change, the gathering apocalypse of our collective future. The empty streets and clear skies had vouchsafed us a vision of a world beyond fossil capitalism’s terminal trajectory.

There are more than 1 billion cars on the road today, a number that the International Energy Agency (IEA) projects will double in the next twenty years. Yet IEA modeling suggests that emissions from transportation should have peaked in 2020 in order to keep temperature rise within a range that averts climate meltdown. Contrary to their mythologization in commercials as the vehicles of limitless freedom and manly self-realization, cars are on a collision course with the planetary environment. They are the primary engines of the ecological holocaust that threatens to engulf all of us.

But what about electric vehicles (EVs) — can’t we just replace dirty old internal combustion engines for spanking clean roadsters running on renewable power? This is what companies like G.M. and Tesla would like us to think: G.M. recently grabbed headlines by announcing that it would only produce “zero-emission vehicles” after 2035, and Tesla already markets its cars using images of the climate emergency, suggesting that their cars are key to a sustainable future, the antithesis of the dirty and terrifying world of fossil fuels that we presently inhabit.

Yet only 1.4 million electric vehicles have sold in the US as of 2019, and 40 percent of those are hybrid cars — capable of running on gasoline — rather than all-electric ones. In other words, truly electric vehicles were less than 0.04 percent of all the cars sold in the US between 2011 and 2019. Of the 2 billion cars the IEA estimates will be on the road by 2040, only an estimated 280 million are likely to be electric vehicles — leaving more than 1.7 billion dirty cars on the road. In addition, even when cars are powered by electricity, renewable energy at present only constitutes 11 percent of total energy consumption in the US, equivalent to the amount of power derived from coal, which means that a portion of the power that moves EVs is actually dirtier than gasoline. Lastly, EVs are significantly more energy and resource intensive to produce than conventional cars because of the mining of lithium and other minerals for the batteries in which they store electricity. The Union of Concerned Scientists estimated in a 2015 report that production of an EV produces at least 15 percent more emissions than the manufacture of a conventional car, although they argue that these additional emissions can be offset by lower emissions from driving.

From these statistics it should be clear that electric vehicles are the primary element in contemporary green capitalist fantasy: the idea that a convenient technological solution will fix the climate crisis, precluding the need for any significant economic or cultural shifts and thereby protecting the sacrosanct, high-consumption “American way of life.”

The reclaiming of streets in NYC and other cities during the pandemic offers an alternative vision of the future, one based on communal luxury rather than the privatized excess of the individual automobile. During the summer of 2020, inspired by the city’s empty streets, New York Times columnist Farhad Manjoo collaborated with the Practice for Architecture and Urbanism (PAU), a Manhattan-based architectural firm, to produce a vision of a car-free New York. PAU’s proposal was not to ban all motor vehicles, but just all privately-owned cars. Yet even with delivery trucks, taxis, and rideshare cars still in circulation, the effect would be radical. In a private-car-free world, PAU estimated, the city could expand sidewalks to give pedestrians more space, replace car lanes with two-way bike lanes protected by concrete barriers, and establish dedicated lanes for rapid transit buses that would efficiently shuttle large numbers of people around the city, relieving congestion on the subways. We could all breathe much cleaner air, and traffic fatalities would be radically reduced.

The amount of urban land devoted to cars at present is shocking: in Los Angeles, for instance, land for parking spaces exceeds the entire land area of Manhattan. All of the space freed up by banning private cars could be used not just for cleaner, less-carbon intensive forms of transportation, but also for more public space. PAU’s vision of a car-free city holds out the tantalizing possibility of new micro-parks, new public gathering spaces, and new space for civic and social services. Their plan reminded me of the revolutionary maxim from the May 1968 protests in Paris: “beneath the cobblestones, the beach.”

The only troubling element in PAU’s vision of a car-free city is that it only includes Manhattan. While they would benefit from reduced regional traffic congestion, the outer boroughs, where the majority of the city’s working-class population and people of color live, are not directly included in the plan. When I asked PAU Senior Associate Skylar Bisom-Rapp about this omission, he explained that the firm decided to tackle the bounded geography of Manhattan because its density and the low volume of current car ownership of its residents makes it a particularly felicitous site from which to imagine a car-free city. The outer boroughs, Bisom-Rapp said, are far more similar to other US cities in their relatively low density, car-dependent profile. Adding Bus Rapid Transit to connect people living in outer borough neighborhoods like Corona or Canarsie to the subways would make it possible for their residents to do without their cars, but such communities tend to be wary that such proposals inevitably lead to a push for what planners call “upzoning” around transit.

Why this resistance to upzoning? Because easier access to the subway — a desirable feature for any urbanite — creates conditions ripe for speculation, gentrification and displacement. Transit policy is, in other words, inextricably connected to questions of affordable housing. We cannot and will not succeed in reducing transit-related carbon emissions unless we tackle housing justice in tandem. As Bisom-Rapp put it, if you can provide real legal protections against displacement, aggressively fund affordable housing, and invest in public transit, then you can create the conditions where banning private cars in all five boroughs is possible, practical and politically palatable.

So building a truly green city turns out to be a deeply intersectional enterprise, one where we have to think about urgent needs for low-carbon mobility and affordable dwelling in tandem. It is a project, moreover, in which issues of social and economic justice have to be inextricably linked to the struggle around the climate emergency. And in New York City today, it all comes down to vanquishing the austerity ideology that prevents us from building the city we want, the city we need to have if we are to avoid planetary ecocide.