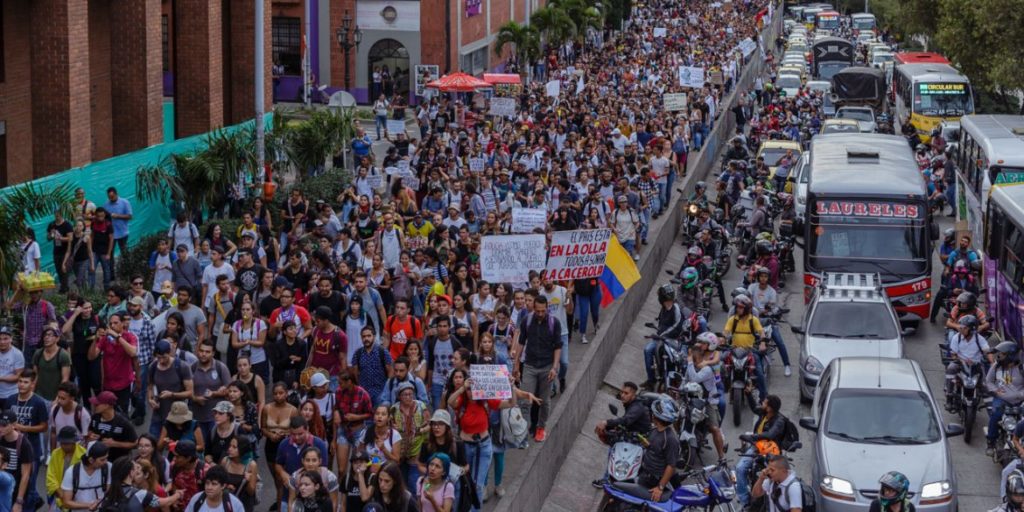 A controversial tax reform proposed by President Iván Duque’s government has triggered strikes and mobilizations across the country; but the anger that has flooded the streets in every major town and city across Colombia is directed at much deeper demands against the social, economic, and health crises exacerbated by years of Duque’s austerity policies.

Duque’s tax reform proposes to tax public services, raise taxes and cut tax exemptions for many individuals, and impose a VAT (value added tax) on several public services, in order to raise $6.78 billion to combat the national debt. Anger has exploded in particular against the VAT tax, which would dig deep into the pockets of millions of poor and working class people across the country.

Duque has tried to pass off the increase in taxes and services as a “solidarity system” to finance subsidies. However, the reality is that it is an attempt to keep the country’s coffers in order without cutting into the profits and fortunes of the richest sectors of society; Duque would rather unload Colombia’s deepening economic crisis on the backs of working men and women.

But the tax reform is not the first unpopular policy Duque has tried to pass; in his tenure as president, his initiatives have only increased misery across the country. According to statistics published by DANE (National Administrative Department of Statistics) this Thursday, the monetary poverty index in Colombia for 2020 increased 6.8 percent and stood at 42.5 percent; in other words the DANE is reporting that 21.2 million Colombians do not have enough income to meet their basic needs.

In total, almost 3.6 million Colombians fell below the poverty line in 2020, as a result of the greatest economic recession in the last 120 years; though this latest economic crisis has deep roots, it was exacerbated by the government’s measures to contain the Covid-19 pandemic. Far from combatting the health crisis, these measures were only successful only allowing businesses and capitalists to maintain their profits while the rest of the population was left defenseless against the pandemic and further attacks on their living conditions.

More than one million people who are living in poverty reside in Bogotá, the country’s capital. This number represents 31.3 percent of total poverty in Colombia. Additionally, the Gini coefficient, which measures global inequality, rose from 0.52 to 0.54 in Colombia, a figure never seen before since the indicator began to be calculated in 2012.

From the 2019 Strike to the Present

Since the massive strikes and protests that broke out on November 21, 2019, Colombia has been rocked by spurts of mobilizations across the country; the austerity measures and repression of the Duque government have opened a profound process of incessant class struggle among the nation’s working, poor, and indigenous people. Among the many targets of rage against the current regime is the state’s unspoken policy of massacring activists and opponents of the regime across the country, a hold over from the country’s long Civil War; as Indepaz reported recently, at least 33 of these state-sanctioned mass killings have taken place in 2021 alone, resulting in the murder of 119 people.

The massive marches that began in November 2019 were followed by more national mobilizations in December. People took the street again in January 2020, and again in February in outrage over the murder and repression of activists and leaders of social movements across the country.

This social unrest, and the violent repression by the government, foreshadowed a deeper crisis about to unfold in Colombia, whose economy has been devastated by the pandemic. Intermittent protests shook the country in March and April 2020, in reaction to the nationwide quarantine ordered by Duque’s government. Millions of people, primarily precarious workers who constitute a high percentage of the population, were thrown into further economic hardship by the stay-at-home order; meanwhile, Covid-19 ripped through the country and the government proved itself completely incapable of dealing with the health crisis.

By June 2020, the protests came back in full force — thousands of workers participated in national strikes and mobilizations across the country; however, these paled in comparison to the weeks of revolt in September and October, which resulted in 13 deaths at the hands of Duque’s repressive forces. These mobilizations were led by Colombia’s youth, who mobilized in higher numbers than ever before, outraged by the government’s military response to the pandemic and Duque’s attacks on their futures.

These waves of protests have now culminated in the most recent mobilizations which began on April 28, in the middle of an aggressive third wave of the Covid-19 pandemic. With thousands of people participating in demonstrations across the country, the force of these mobilizations are reminiscent of the height of the 2019 protests. Once again, the government deployed the Esmad (Mobile Anti-riot Squadron) forces, who fulfilled their usual repressive role: one woman lost an eye in a confrontation with officers in Bogotá and a young man was killed by police in Cali.

Discontent That Won’t Be Contained

It is the weariness of the workers, agricultural workers, indigenous people, the youth, and the poorest sectors of the country that is once again driving this latest wave of class struggle, which has included a national strike and multiple demonstrations. In the throngs of protesters taking to the streets, “No to the tax reform” can be heard in chants and songs and seen emblazoned across banners, T-shirts, and posters. But this fight represents much more than opposition to a specific tax reform; the thousands of people taking to the streets are fighting against a government which produces, as the chants say, nothing more than “hunger and misery for the people.”

The days of action this week were called on March 6, even before the details of the government’s tax reform proposal were announced. But on the day before the work stoppages and mobilizations were meant to take place, the government prohibited the marches, citing the pandemic, and ordered that the demonstrations be held virtually. Nevertheless, the organizers, grouped in the “National Strike Committee” — which is made up primarily of workers’ centers, student groups, and peasant organizations — rejected the government’s orders and maintained the call for mobilizations.

The defiance of the government’s order should come as no surprise given the rage of the workers and poor across Colombia. Throughout the pandemic, the Duque government has done nothing but take advantage of the situation to advance its reactionary agenda. At the same time that it imposed the quarantine, it forced large sectors of workers to be confined without access to a wage or resources to sustain themselves and their families. Meanwhile, the state carried out its usual violence, murdering activists with impunity and harassing anyone who dared violate the stay-at-home order.

A General Strike to Defeat the Duque Government

Since the beginning of the 2019 mobilizations, none of the people’s demands have been satisfied; worse still, the people have suffered further attacks on their lives and livelihoods by the Duque regime. The workers, indigenous peoples, and poor of Colombia are faced with the necessity to deploy all their forces to oust the Duque government and the business interests he serves, so they are not forced to continue to pay for the current crisis.

The mobilizations in Colombia reflect deep economic and social justice demands that have the potential to unify all the oppressed sectors of the country in action. These days of protest could constitute a first step in a plan of struggle that leads to a general strike to finally defeat Duque’s government. But for this, it is necessary for the thousands taking to the streets to create their own bodies of self-organization to decide next steps and carry the fight forward.

The unions, though they have defied the government’s stay-at-home orders and carried through with the mobilizations, will not go much further on their own. As Colombia’s workers know, every time union leaders carry out forceful actions, they immediately seek a path of negotiation and dialogue with the government that leads to the deflation and pacification of the struggle. The rank-and-file workers must resist the capitulations of union leaders and forge their own path.

They are not without powerful examples: the workers and the people of Colombia can see their fight reflected in the struggle of workers in Chile, where dock workers defeated Piñera’s attacks on their pensions; they can also look to the healthcare workers of Argentina, who, with the support of wide sectors of the population and the development of committees and assemblies to organize the struggle, were able to win a salary raise after weeks of intense fighting. Combining the lessons learned in these struggles and their own experiences over the last several years of revolt, the workers and oppressed peoples of Colombia can defeat Duque’s latest austerity measures and fight for much more.

Originally published in Spanish on April 29 in La Izquierda Diario.