Columbia Grad Students On Strike for a Living Wage 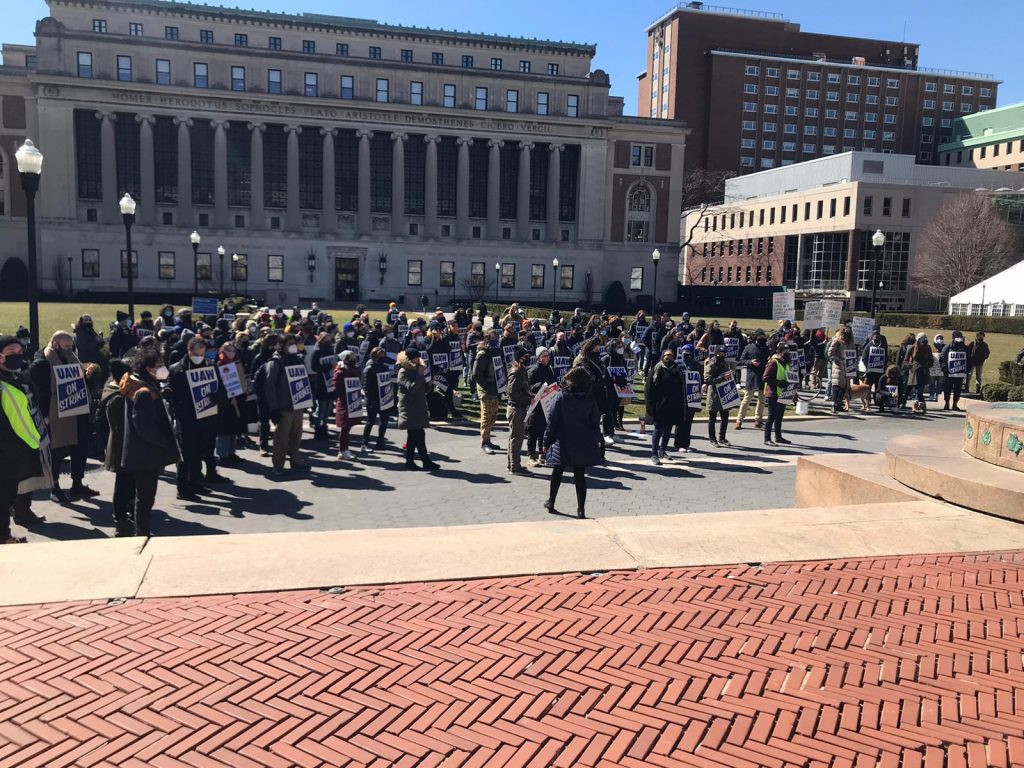 On one side of Columbia University’s College Walk, the marble steps and impressive dome of Lowe Library loom over the campus. On the other side, the names of Greek and Roman philosophers and authors are engraved above the ionic columns of another library. In between these imposing buildings, on the university’s South Field, more than a hundred graduate student workers gathered for the first day of their strike, with at least 150 more workers and allies joining via a digital picket line.

After two years of organizing for union recognition and two more years of bargaining, the grad student union, known as the GWC-UAW, is still fighting for its first contract. Their demands include raises for all employed graduate students, protection from discrimination and harassment, and a better healthcare plan.

Last week, Interim Provost and well-known labor historian Ira Katznelson attempted to avert a strike by sending an email to the graduate workers calling for “mutual realism.” Katnelson asked students to have sympathy for the financial plight of the university and urged them to be grateful for the stipends they already receive. However “painful” he may say he finds sending such letters, he is nonetheless trying to snuff out the strike and withhold money and benefits from the workers. He is siding with management because, regardless of his past academic research, he is management now. This is just another example of how certain organizational positions uphold exploitation regardless of the personal views of the person who holds that position. Katznelson may very well feel pain in his heart, but the nature of his position means he will choose to betray the workers anyway. As provost, his interests are definitionally opposed to the interests of the graduate student workers. His job is to manage the university as a whole, and universities thrive on the exploitation of grad students, adjuncts, and other underpaid, precarious workers.

GWC-UAW organizers are pointing to an agreement reached last summer that gave significant raises to postdoctoral researchers, saying that current graduate students deserve better wages too. Katznelson argues that the situations are different, because Columbia postdocs were underpaid relative to other universities, whereas Columbia’s graduate students make more than their colleagues at most other schools. It is true that Columbia PhDs are well-paid for graduate students, even compared to student workers at other prestigious Manhattan universities. However, being well-paid compared to other members of an especially exploited tier of workers is not the same as being well-paid.

Graduate student workers at Columbia on 9-month contracts are paid $31,140 per year plus a $4,000 summer stipend, which totals only slightly more than the salary of a full-time minimum wage worker in NYC ($31,200). Workers on 12-month contracts make the same salary pro-rated for the additional months but do not receive summer stipends. For the New York City area, these wages are considered either very low income (9-month contracts) or low income (12-month contracts) for an individual with no children. Additionally, the majority of Columbia graduate students pay to live in campus-owned housing, so a large portion of their income goes directly back to the university. Average rents for graduate student housing at Columbia are far higher than what is considered affordable for students’ income level, even when living with roommates.

Any student with “full funding” ought to be able to live comfortably without having to take on additional jobs. This is simply not possible for the vast majority of graduate students, at Columbia or elsewhere. So, while the Columbia student workers may be better off than their colleagues at other schools, their demand for an 18.7 percent raise for 9-month employees and an approximate 10 percent raise for 12-month employees is, contrary to Katznelson’s assessment, both “reasonable and responsible.” In fact, even if their demands are met in full, the graduate workers will still be considered low-income for New York City, with a high portion of that income still going directly back to the university’s coffers in the form of rent.

Despite Katznelson’s continued attempts to put a stop to the strike, the GWC-UAW is remaining firm, with two full weeks of pickets currently planned across Columbia’s various campuses. Left Voice will continue to cover the strike as it continues.