Columbia is trying to hire scabs to replace student workers for spring semester in an effort to break their 7-week-long strike. Student workers at NYU-GSOC have organized a pledge that no academic worker will cross the picket line by applying for or accepting these jobs. We reprint the pledge here and urge readers who work in higher education to sign on as individuals and ask their unions to do the same. 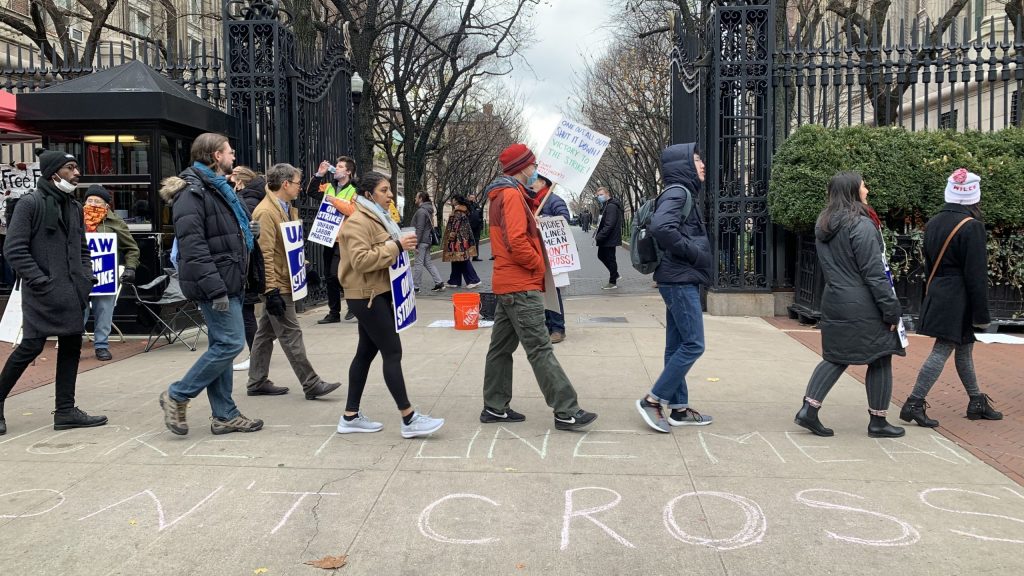 Last Thursday, December 2nd, Columbia University notified their student workers that workers who remained on strike after December 10th would be removed from their present positions. This is not only aggressive and discriminatory; retaliation against workers who are exercising their legal right to strike is likely illegal under federal law.

The Student Workers of Columbia (SWC) – UAW Local 2110 are on an Unfair Labor Practice (ULP) strike, which legally protects them from permanent replacement. SWC has already filed Unfair Labor Practice charges against Columbia for freezing compensation and changing the stipend disbursement schedule.  Columbia has yet to withdraw its threat, and SWC-UAW will file a third ULP charge for their numerous attempts at unlawful retaliation.

Despite this, Columbia has started to advertise so-called “open positions” to NYC-area adjuncts, teaching assistants, and graders. As of December 13th, Columbia administration and faculty are calling on instructors at NYU and other universities to replace SWC-UAW workers to grade fall assignments and instruct spring courses.

Columbia’s aggressive and illegal anti-strike measures set a dangerous precedent for the treatment of academic labor across the board. This blatant retaliation against strikers threatens our fellow student workers with financial precarity and illegal employment termination.

We, the signatories, refuse to collaborate with Columbia University’s attempts to break the strike by Student Workers of Columbia (SWC) – UAW Local 2110. NYC-area educators and researchers refuse to replace graduate student workers on strike. We condemn Columbia’s repeated retaliation and unfair labor practices. By signing, we commit not to seek nor accept any contract or adjunct employment at Columbia University which seeks to replace striking members of SWC.