Columbia University’s Department of Middle Eastern, South Asian and African Studies has issued a statement refusing to hire scabs for the spring semester. All departments should follow its lead, stand in solidarity with student workers, and defy the university’s orders to break their strike. 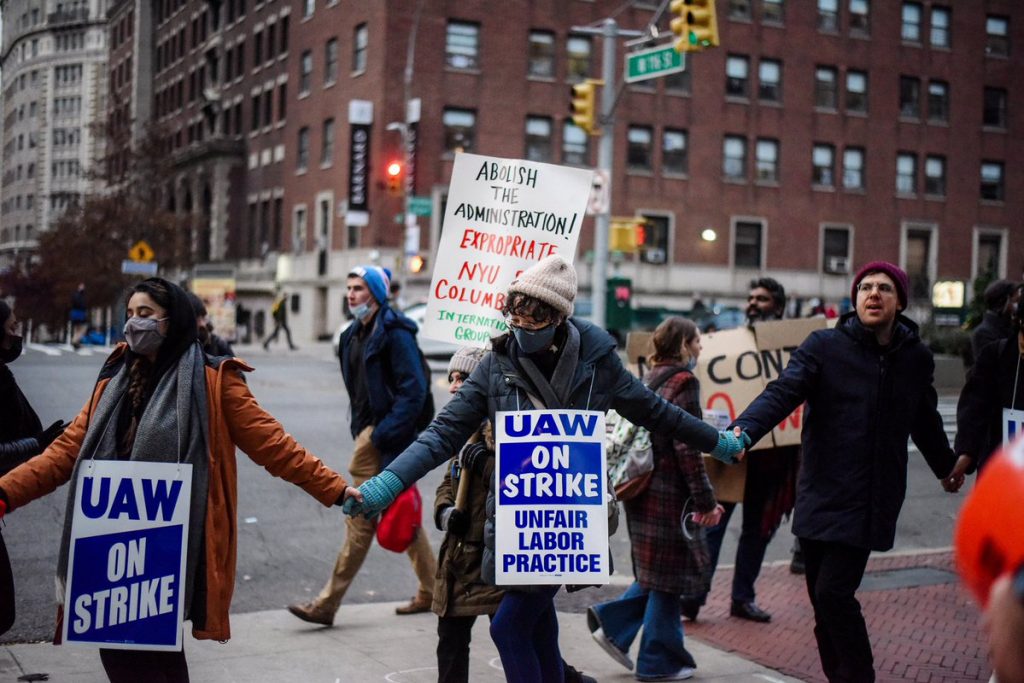 Two weeks ago, Columbia threatened to retaliate against the student workers by stripping them of their spring semester appointments. On December 16, 114 members of Columbia’s Middle Eastern, South Asian, and African Studies (MESAAS) department — faculty, students, and alumni — issued a statement speaking out against the repression of striking workers and refusing to hire scabs:

On December 2nd, graduate student workers on appointment across the university received an email suggesting that those who are on strike as of December 10th will not receive spring semester appointments or will otherwise not be prioritized in the appointment process as a form of punishment for exercising their legal right to strike. This constitutes a clear and illegal retaliatory measure on the part of the university administration, a measure which threatens hundreds of student workers with financial precanty and illegal employment termination and which puts international students on F-1 and J-1 visas at even more risk.

We, members of the Department of Middle Eastem, South Asian and African Studies at Columbia University, would like to express our strong disapproval of the efforts of the university administration to intimidate our striking graduate students by threatening to hold up their teaching appointments in the spring. We consider these tactics unproductive and unconscionable, and we call on the administration to work with our teaching assistants and their union representatives to bring a just and quick end to this strike — which is having such devastating effects on the entire university community. We, members of the MESAAS department, refuse to distinguish between striking and non-striking students in the department’s internal planning around assignments for the Spring.

As the MESAAS statement makes clear, Columbia’s actions are illegal retaliation against workers who have the right to strike under the law. But the university’s attacks against the student workers go much further. Columbia is freezing compensation and changing the stipend disbursement schedule. And despite an outcry from students and professors, Columbia has refused to withdraw the threat to replace striking workers.

This one department is taking the issue into its own hands, refusing to comply with the university’s scare tactics by not distinguishing between striking and non-striking workers. In other words, MESAAS will continue to appoint striking workers to positions and will not hire scab labor for those jobs in the spring. Every Columbia department should follow this example.

Columbia graduate students are on strike to win three major demands: comprehensive healthcare benefits, including dental care (which has resulted in a popular picket line chant — “We have teeth!”); neutral third-party arbitration in cases of harassment; and increases in wages. New York City already has a very high cost of living, and inflation is driving it higher. At present, Columbia student workers are paid between $6,000 and $19,000 less than the living wage calculated for New York City.

These demands follow on the heels of the most recent financial statement of the Columbia Board of Trustees, which shows that during the pandemic, the university increased its net assets by a whopping 20 percent, or $3.3 billion. The union has argued that meeting their full demands would cost less than one half of one percent of these assets

Solidarity and support for the Columbia strikers has come from throughout the city, with student workers from many other schools joining picket lines. All departments at Columbia should follow the MESAAS lead and refuse to hire scabs, and it is essential that student-worker unions at other universities pledge to refuse to scab. It’s time for everyone to join the picket lines at Columbia University.