The first Democratic debates are now over, meaning the primary season for 2020 is now fully underway. Featuring 20 candidates over the course of two nights, the debates offered important insights into the candidates’ strategies — both in what was said and what was not. 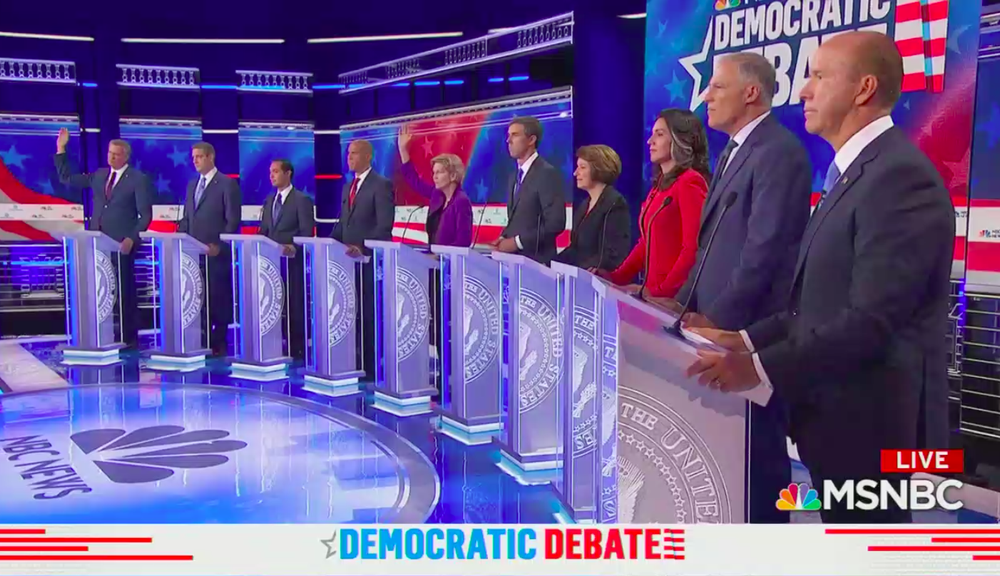 Over two nights and four hours of debate, 20 Democratic presidential hopefuls tried to boost their campaigns on a national stage. Unsurprisingly, Trump was the biggest focus of the both debates. The president’s name was mentioned more than 50 times over the two-night event and many of the candidates declared that defeating Trump is their highest priority. Trump himself tweeted several times about the debates. Yet the debate participants also laid out their visions for the next presidential administration, allowing us to see more clearly what separates the candidates from each other and what unites them.

The first debate, held on Wednesday night, was dominated by Elizabeth Warren, who has been surging in the polls and is now head to head with Bernie Sanders for second place after Joe Biden. Of course, Warren did not debate anyone who really poses a threat to her; most of the candidates on night one of the debates seemed to be maneuvering toward top cabinet positions rather than having any real shot at the presidency.

Thursday night’s debate was a bit more interesting. Biden, who holds a nearly twenty-point lead in the polls, was the target of nearly everyone onstage. Even the moderators seemed to save their toughest questions for the former Vice President. However, much of the media declared Kamala Harris, who sparred the most with Biden on Thursday, as the clear winner of the debates. For his part, Bernie Sanders managed to navigate the rough waters of the night and stay on message, though none of his answers were particularly noteworthy. Despite receiving plenty of attention from the other candidates, Sanders stuck to his playbook and did not make any rightward turns as one might have expected in front of a national audience. This is most likely because of the left pressure put on him by Warren, who has caught up to him in the polls within only a few weeks since she put forward a similar platform of alleviating college debt and passing a Green New Deal and Medicare For All.

Let’s look at a few of the most important conclusions from the debates.

The Bernie Sanders phenomenon has not disappeared.

When Sanders first launched his campaign for president in 2015, he was considered to be little more than a protest candidate against the massive Clinton political machine. Four years later, the Vermont senator has become a nationally-recognized figure and, in a field of more than 20 candidates, is currently polling second behind frontrunner Joe Biden. Hundreds of thousands of individuals — primarily young people — continue to volunteer and donate to the Sanders campaign. His platform of ending college debt, making healthcare free and available to all and raising the minimum wage resonates among the millions who have still not felt the impact of the supposed economic recovery after 2008.

That said, in light of his performance in the first debate, there is no denying that Sanders has lost some of his luster since his 2016 candidacy. Many of his responses—“We need a political revolution,” “People have got to stand up and take on the special interests”—seemed stale and vague. Still, his importance on the debate stage was unignorable. Nearly every serious Democratic candidate has tried to emulate the Sanders phenomenon to some extent, attempting to seize the “progressive” mantle away from the Vermont senator. One by one, the candidates announced their proposals to “end income inequality” and the abuses of the rich. Senator Kamala Harris and author Marianne Williamson proposed plans to pay reparations to descendents of slavery. Kirsten Gillibran proposed paid family leave and universal pre-K programs. Even the former tech industry executive Andrew Yang attempted to ride the populist wave, highlighting his plan for a universal basic income of $1,000 per month, which would be distributed to every person, regardless of income, in the country. This is not to mention Elizabeth Warren’s platform, which takes up nearly all of the demands that propelled Sanders to success in 2016.

The tremendous popularity of Sanders also made him a major target for attack by the rest of the Democratic Party contenders. Several candidates took aim at the Medicare for All proposal put forward by Sanders, arguing instead for a more “responsible” approach which would leave private health insurance intact. Among the 10 candidates on stage Thursday night, Sanders and Harris alone called for an end to private insurance, though Harris later backtracked on her comments. John Hickenloper, the long-shot candidate from Colorado, made two separate attacks on the dangers of socialism for the country — a clear reference to Sanders’s candidacy. Kirsten Gillibrand also came out in defense of capitalism, noting that there is “a big difference between capitalism on the one hand and greed on the other.” According to the New York senator, “a healthy capitalism” is still possible.

Albeit with differences in their positions, every Democratic candidate spoke in favor of more state intervention in political life and in the economy. This strategy is in line with recent polls that show that  fewer than half of Americans view capitalism positively.

No candidate was willing to attack the legacy of Barack Obama.

While plenty of ire was directed at Trump, the Democrats on stage during the debates all appeared firmly behind the 44th president. Only one candidate — Kamala Harris — raised a criticism of the Obama Administration but even her comments were relatively benign. Harris noted that she opposed the administration’s “Secure Communities” program, which tasks local law enforcement with aiding Homeland Security in detaining undocumented immigrants. Only the moderators brought up Obama’s deportation record during the debates. Neither Harris nor any other candidate onstage denounced the former president’s deportation of 3 million people, the vast majority of whom never committed a crime.

Neither was there any discussion of Obama’s responsibility for the ongoing presence of U.S. troops in the Middle East, the deadly drone attacks carried out under his orders which killed thousands in Somalia, Yemen, and Pakistan and elsewhere, or his administration’s support for murderous, right-wing regimes in Saudi Arabia, Israel, Colombia and Egypt.

Despite a heavy focus on the climate crisis throughout the night, no candidate mentioned the role of the previous administration in expanding oil and natural gas extraction or the fact that carbon dioxide emissions reached new highs several times during the Obama years. Many touted the Paris Agreement and promised that the U.S. would rejoin once they took office, but each failed to point out that it was the Obama administration that refused to enter a binding agreement and insisted instead on voluntary commitments.

Unsurprisingly, Biden appears to be staking his entire candidacy on the legacy of the Obama administration in environmental policy, healthcare, and civil rights. Yet without exception, his claims about the many “progressive” accomplishments of the Obama era went uncontested by anyone onstage during the debates.

When the topic of foreign policy did enter the discussion, candidates primarily denounced the “threats” posed to U.S. security by Russia and China or spoke about strengthening NATO and other military alliances. Biden did say that it was “long overdue” for troops to be withdrawn from Afghanistan, but he failed to mention that it was the Obama-Biden administration that kept more than 8,000 U.S. troops in the country as late as 2017.

While many candidates went to great lengths to demonstrate their “progressive” credentials in domestic policy, none dared to call for an end to U.S. support of Israel and its brutal and illegal occupation of Palestine, for ending the U.S. blockade of Cuba, or for the closure of U.S. military bases abroad. There was not a single word about the American-orchestrated coup attempt in Venezuela or about the State Department’s training of Sergio Moro, the primary figure behind the institutional coup against Dilma Rousseff in Brazil. Several candidates spoke about immigration and the need to offer relief to refugees, but only Williamson mentioned (and only briefly) the U.S. policies toward Latin America, particularly in Mexico and Central America, which provoked the current humanitarian crisis and the exodus of refugees.

The issue of race was the weakest point for all the candidates.

Kamala Harris scored her biggest victory of the night by calling out Biden’s past opposition to school integration through busing and for his supportive statements about segregationist senators. Harris noted that she was one of the Black students who had been able to attend an integrated school only because of busing, a measure that Biden — despite denying his involvement — fought as a young senator. According to a Washington Post report, ”Biden took a lead role in the fight, speaking out repeatedly and forcefully against sending white children to majority-black schools and black children to majority-white schools.”

However, even Harris was hamstrung by her own record on race. As District Attorney for the state of California, she was responsible for the incarceration of thousands of Black and Latino people. As In These Times notes, Harris continued to lock up low-level offenders even as the Supreme Court ruled California’s prisons to be dangerously overcrowded. She also continued to hold prisoners in solitary confinement, resisted the overhaul of “three-strikes” legislation, and supported laws which would criminalize truancy and threaten parents with jail time, policies which disproportionately affected minorities. Even Biden was able to get a shot in at Harris for her legacy, noting that though he had worked as a public defender, he “didn’t become a prosecutor.”

Meanwhile Pete Buttigieg, a darling of the party and a figure thought to be a strong choice for VP, had his candidacy rocked by the killing of a black man at the hands of a notoriously racist white cop in South Bend, Indiana, where he serves as mayor. When Buttigieg was pressed on stage by Representative Eric Swalwell to fire the police chief, the young mayor only glared in silence.

It is evidence of a growing disillusionment with capitalism and the increasingly progressive aspirations among young people in particular that so many of the candidates during the first debates were forced to put forward proposals to burnish their progressive profiles — from Medicare for All to ending college debt. The debates showed, however, that no Democratic candidate can offer real solutions for working-class and oppressed people as long as they are unwilling to challenge the rule of capital. The “healthy capitalism” that Kirsten Gillibrand hopes for is an utter impossibility. The Obama presidency demonstrated that a few seemingly progressive measures are wholly insufficient in the face of a climate emergency, mass incarceration, and a full-scale assault on the rights of women. These crises are logical outgrowths of capitalism. Consequently, an anti-capitalist movement is not just the only way out of these crises — it is the only way to beat Trump and the reactionaries for good.