The UN international climate conference, COP27, opened on November 6 in the coastal city of Sharm el-Sheikh in Egypt. Heads of state, scientists, and NGOs from around the world are meeting for two weeks to discuss global warming and the transition to renewable energies. The international meeting, which has repeatedly proven ineffective in curbing climate change, is taking place in a country notorious for its climate inaction and for its brutal repression and persecution of political opponents and environmental activists.

President Abdel Fattah al-Sissi, who came to power in 2013 after overthrowing the government of Mohamed Morsi, is at the helm of Egypt’s quasi-dictatorial regime. Since coming to power, al-Sissi’s government has exercised repressive policies to an unprecedented extent, even worse than under the government of Hosni Mubarak, the president overthrown at the start of the Arab Spring in 2011. Freedom of the press is almost non-existent, freedom of demonstration is highly limited, and the country has more than 60,000 political prisoners, a figure that makes Egypt one of the most repressive countries in the world.

One of the most eloquent and well-known examples of political repression is that of Alaa Abd el-Fattah. This British-Egyptian activist and blogger, a figurehead of the 2011 uprising and rebellion, paid dearly for his struggle to try to end the Mubarak government’s corruption and authoritarianism. Alaa has been in prison since his 2014 conviction for having participated in “unauthorized demonstrations.” He began a hunger strike a few months ago and stopped drinking water when COP27 started. Once the conference ends, he will be free or dead.

Tens of thousands of political prisoners like Alaa are locked up in Egypt, often without a trial and exposed to torture. This situation is not going to change: al-Sissi’s Egypt is a favorite ally of many imperialist powers, particularly the European Union and France.

The Egyptian government mounted an intense PR campaign to give the impression that basic human rights would be guaranteed during the conference, but nothing could be further from the truth. The city of Sharm el-Sheikh, a historic haven for the Egyptian bourgeoisie and wealthy tourists from around the world, segregates the local populations, mainly Bedouins, from the country’s wealthier social classes. A literal wall was built around the city to separate these populations under the guise of preventing “criminal or terrorist acts.” Access to the beaches is practically impossible for the inhabitants of the surrounding area since these have been privatized and are now in the hands of unaffordable luxury hotels.

Repression has also extended to the virtual terrain: the official COP mobile app allows intelligence agencies to track the movements of all visitors and even requires users to give their passport number during installation. In the same vein, visitors are blocked from accessing sites that are opposed to the government, including human rights and certain news websites.

The individuals and organizations authorized to witness the summit have been carefully selected. Egyptian NGOs and activists must receive prior approval by the Ministries of Foreign Affairs, Environment, and Solidarity before being allowed to attend. Most organizations with even slightly dissenting voices have not been invited, and protest actions have been relegated to a secure area along the road leading to the resort where the COP activities are taking place.

The UN and the UNFCCC, which oversee the conference, are turning a deaf ear to this repression. Ahmad Abdallah, the co-founder of the Egyptian Commission for Rights and Freedoms who was not allowed to attend COP27, points out that “they want to greenwash their image and show to the world that they’re not responsible for human rights abuses” and that the UN is complicit in this.

Indeed, COP27 is an unparalleled opportunity for the al-Sissi government to mount a gigantic greenwashing operation in a country that is doing almost nothing to reduce its carbon footprint, clean up cities, or preserve the Red Sea coral reefs. Egypt’s abysmal environmental record can largely be attributed to the liberalization policy undertaken by Hosni Mubarak during his decades in power under the benevolent gaze of the West.

But the situation has deteriorated dramatically since al-Sissi took power. The country is still 95 percent dependent on fossil fuels, oil production has doubled since 2006, and Cairo is one of the most polluted capitals in the world. Fossil fuel extraction, mostly managed by the military, has a devastating impact on the country’s fauna and flora, especially in the Sinai, where Sharm el-Sheikh is located. The old Aswan Dam has had irreversible effects on the ecology of the Nile, whose bed is eroding at breakneck speed. The damage to the Nile delta, combined with the rising waters of the Mediterranean, may cause Alexandria, one of the largest cities and the country’s capital for a thousand years, to sink within the next few decades.

COP27’s host country thus illustrates everything that should not be done in the fight against global warming. The organization of a climate conference in one of the most authoritarian countries in the world that does the least against global warming is already a challenge in itself. Added to this is the fact that the conference is taking place in one of the regions most affected by the effects of climate change. The Sinai Peninsula is bearing the brunt of the effects of human action on the planet.

The choice of Sharm el-Sheikh for a climate conference is a snub to those who fight for the climate’s preservation: this city of concrete and asphalt, an environmental horror, is a symbol of the impunity of the bourgeois classes in the destruction of ecosystems, when the poorest populations are the first to suffer the effects of global warming. As Hussein Baoumi of Amnesty International points out:

“Sharm el Sheikh is a dream resort where the government can exclude the majority of Egyptians, and invest huge amounts of resources to ensure that everything is under surveillance and their control. It’s telling how the Egyptian presidency and the leadership view their ideal society, it’s a gated one without the masses.

It is in this context that Egypt is hosting COP27 today in almost absolute silence on the part of the heads of state and NGOs invited to the conference. It is true that some timid protests can be heard: the UK Prime Minister Rishi Sunak announced that he wants to “discuss” Alaa’s case with al-Sissi. Beyond these token gestures, nothing will change for Egyptians or for the 60,000 political prisoners in the country, considering that Egypt is the partner of choice for most of the imperialist heads of state invited to the conference. Egyptian fossil fuel partnerships have multiplied this year in the context of the war in Ukraine and the current oil and gas crisis. The European Union, for its part, has begun the process of negotiating a lucrative contract for the delivery of Israeli LNG (liquefied natural gas) through Egypt. This system which puts polluters and profits over people will not provide a solution to the compounding ecological crises threatening the planet.

Originally published in Spanish on November 8 in La Izquierda Diario. 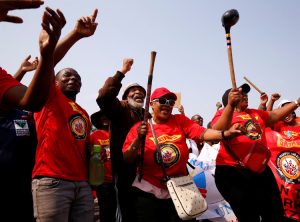