Cops and Militias: A Long History of Collusion

It’s no accident that cops and right-wing militias seem to work hand in glove. They have a history of colluding to serve the role cops play, as Lenin articulated: “special bodies of armed men” to protect private property and the capitalist order. 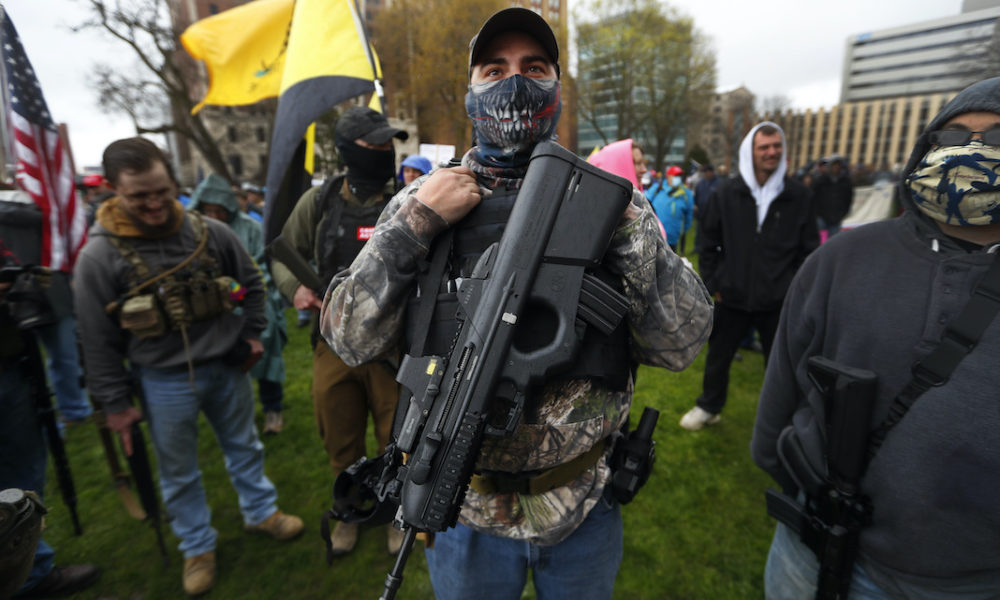 On May 29, at the federal building in Oakland, California, a federal security officer was shot and killed in a drive-by shooting. The same man charged in that murder has also been charged with murder after ambushing Santa Cruz, California deputies and throwing pipe bombs at local police, killing one and wounding four others. He is a member of the Boogaloo Bois, part of a loosely organized far-right movement with strong ties to various right-wing militias.

Today’s right-wing militias are paramilitary groups that have existed for decades to challenge what they see as a “tyrannical” U.S. government imposing rules and laws with which they disagree. This imposition is more often than not linked to alleged influence over or control of the government by hated racial, ethnic, and religious groups — which is why they are so closely associated with white supremacy and neo-Nazism. Membership in militias has grown considerably in a couple of spurts, most recently in the period immediately after the election of Barack Obama as president — a sign of their underlying racism — and as the violent right wing has been egged on by Donald Trump.

The Boogaloos want to see the collapse of the existing political system through civil unrest, and the movement exists to help it along. In this case, the FBI says the shooter and his accomplice “came to Oakland to kill cops,” using the protests against the police killing of George Floyd as cover. Perhaps they would get lucky and the killings would be blamed on antifa groups. Oh, wait, that’s exactly how it was initially reported.

Militias targeting cops is the exception rather than the rule. The “rule” is militias and cops colluding, working together — or at a minimum, cops turning a blind eye to the threat. It goes back a long way, to the 19th century and probably earlier in this country: official police agencies welcoming the help of vigilantes as they work to enforce capitalist order. More recently, this has been the case since the murder of George Floyd spurred demonstrations across the United States. As the Trump administration has banged the drum over “anarchists” and “left-wing extremists” in the streets, threatening “law and order,” the government’s own internal reports have been making it abundantly clear that most violence is coming from home-grown, right-wing terrorism, most often in the form of militias. But that threat is largely ignored, for political reasons. On top of that, there’s mounting evidence not only that many cops are also militia members, but that some police departments have organized groups linked directly to militias among their officers. In 2019, RevealNews published an amazing three-part series about cops and their participation in hate groups.

Which brings us to Kenosha, Wisconsin on the night of August 25. After a few days of protests, militia members came to Kenosha to back up the local cops, who were brutalizing protesters. They were more than welcomed by “law enforcement,” who thanked them for being there, offered them water, and generally signaled to them that they were “allies.”

“I literally witnessed firsthand a massive amount of organized white supremacists driving around in pickup trucks, targeting protesters,” Wisconsin state representative David Bowen told Democracy Now! “And they were there not to try to defend businesses, as they make it seem. They were not there to attempt to get a point across. They were there to hurt people. They were armed, and they were using chemical irritants. They were harassing protesters. And even from the video, it looks like they are in coordination with the Kenosha law enforcement that were there, literally.”

Bowen describes how Kyle Rittenhouse, who murdered two protesters on Kenosha’s street, was treated by the local police. He’s “using [his white supremacist views] lethally. He’s using it to hurt other people. And he’s not even being held accountable for it. He’s being handed water.” He walked right past the cops as protesters yelled that he just shot people, and later, when he was arrested, he was “given the Dylann Roof treatment of — you know, you get treated well, you get acclimated, after you literally take people’s lives.”

In other words, arrested “without incident.” No seven bullets in the back for the white kid.

There are plenty of other recent examples, too numerous for this article. Who can forget the armed militia members allowed to enter the Michigan statehouse with their assault weapons while the cops stood by — serving the interests of capital? A few more recent examples will have to suffice.

On June 15 in Albuquerque, New Mexico, protesters gathered outside a museum to topple a statue of Juan de Oñate, a murderous Spanish conquistador. Members of the New Mexico Civil Guard — a local right-wing militia — showed up to “protect” the statue, heavily armed with assault weapons. As a chain went around the statue’s neck, a former candidate for the Albuquerque City Council, who was amidst the militia members, threw a woman to the ground and began to walk away. Protesters gave chase, and the man — Steven Ray Baca — opened fire, hitting one of them, Scott Williams, in the torso.

Williams lay in the street, bleeding. The militia members “formed a protective circle around Baca, their weapons ready. When law enforcement arrived, officers created a second ring around the militia …” They then “fired tear gas and flash-bang grenades at the distraught crowd.”

If that sounds to you like some seriously choreographed collusion, you aren’t alone.

The cops detained the shooter. As one witness described it, “The police handled the New Mexico Civil Guard and the gentleman very gingerly, with care, to make sure they didn’t get injured, while they were on the opposite side trying to target Black and Indigenous people.”

In Snohomish, Washington on May 31, with rumors that busloads of Antifa members were allegedly on their way to town, a hundred armed vigilantes congregated in the small city’s downtown area as “guards” — something the mayor applauded. The local police chief took heat and eventually was demoted over characterizing this as a festive night of tailgating and celebratory pleasantries: “a man waving a Confederate flag and people flaunting patches of a hate group’s coded insignia on tactical gear. They had arrived for the supposed purpose of protecting the small city’s local boutiques from alleged leftist looting threats that never materialized.”

There are many stories similar to what was captured on film in Salem, Oregon, on June 1. A cop approaches a group of armed white vigilantes just before curfew time, after Salem had been the scene of antiracist demonstrations. “My command wanted me to come talk to you guys,” the cop says, “and request that you guys discreetly remain in your buildings, or vehicles, or somewhere where it’s not a violation, so we don’t look like we’re playing favorites.” The men in question were either part of Proud Boys or Patriot Prayer, according to most social media accounts. The latter had shown up previously to “defend” a local salon that had reopened when its owner refused to follow the governor’s virus-related stay-at-home order.

Here are some snippets of further examples:

∙ In Chicago, a cop was caught on film wearing the logo of the Three Percenters, a right-wing militia group, on his face mask. The group believes only 3 percent of colonists fought the British during the American Revolution, and so they only need a small group to fight. The bombers of a mosque in Minnesota in 2018 were connected to the group.

∙ In Oakdale, California, in early June, members of the California State Militia showed up to protect a boarded-up business. They also positioned themselves on a local rooftop as antiracist demonstrators protested. While the cops officially claimed “no affiliation,” the militia’s “company commander” told a reporter that “his men have been monitoring demonstration activity … for about five days” and that “he let area police chiefs, sheriffs, and mayors know they can call on the militia were problems to arise and their resources were stretched.” Given what we know, it’s hard to imagine public officials didn’t welcome that outreach.

∙ In Provo, Utah, a newly organized militia had a standoff with Black Lives Matter protesters. They were armed to the hilt. A police officer told a reporter that “he trusted 99.9% of the men and women with the guns, and said: ‘Those men and women would be the first people to take a bullet for any of the protesters there’.”

∙ In Georgetown, Texas, on June 6, the Texas Freedom Militia showed up at the Williamson County Courthouse to confront a Black Lives Matter protest. The local police department spokesman “asked members of the militia … to report any signs of violence to Georgetown police so that police could handle it.” As a militia representative later tweeted, “We’re all Texans here so this is not a competition but a joint force operation to preserve and protect Texas lives as well as hold the line with Georgetown PD.”

“Joint force operation.” That’s the language of armies fighting on the same side in a war. And in this case, it’s a war — waged in collusion between the police and right-wing militias, across the country. When cops in Kenosha and other places are caught welcoming the right-wing terrorists to their side — “we’re glad you’re here” — it’s not an accident. Police agencies, time and again, reveal that they see these militias as reinforcements with the opportunity to play a more unfettered role than the police. Militias have no internal affairs departments to investigate police shootings, for instance. In a standoff, it can be very useful for the cops to use faceless, badgeless militia members with assault weapons to terrorize demonstrators. That’s what they tried to replicate in Portland, Oregon, with federal cops acting just like anonymous militias. And the mounting evidence of direct cop involvement as members of these terrorist forces puts the lie to any claim that police agencies are unaware of what the militias are up to. More likely, they’re just the difference between “official” and “unofficial” organized repression.

Brutal assaults and killings like those in Kenosha — be they by the official cops or their unofficial partners in right-wing militias — are not going to end without dismantling the system they protect. They’re only going to increase.