Cops and Their Supporters Unite to Attack BLM Counter-protesters

A growing rightward reaction to BLM protests has sparked “Blue Lives Matter” protests attracting cops and right-wing supporters. Counter-protesters have been met with violence from both the NYPD and the pro-police demonstrators. These confrontations represent a re-escalation of repression by Democratic politicians to both sway public opinion against the protests and try to regain some of the legitimacy lost by the police since the movement against racism and police brutality began. 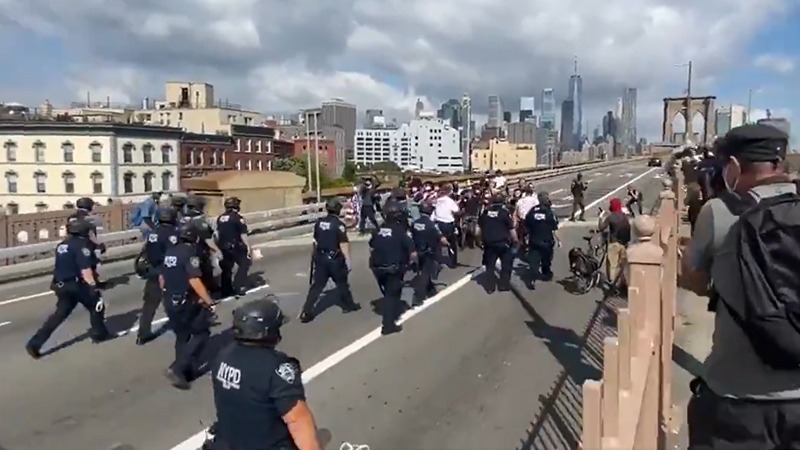 George Floyd’s murder, along with the murders of Breonna Taylor, Rayshard Brooks, and so many others, laid bare for the world how police are mandated by the state to terrorize people of color, especially Black people. The severe repression against protesters put this violence on display on a mass scale and showed the lengths the state is willing to go to  keep its hold on “law and order.” Yet, even as politicians, NGOs, and nonprofits try desperately to co-opt and pacify the movement, the most leftward expression of protesters’ demands — from defunding and disbanding police departments to abolishing police and prisons altogether — have seeped into the national consciousness and gained substantial support. The movement against police brutality has posed a significant challenge to the legitimacy of policing as an institution.

This deep questioning of the police and the system of oppression they uphold has also, however, produced a rightward countertendency in support of police and against the anti-racist movement. So-called “Blue Lives Matter” protests have sprung up across the country, attracting thousands of cops and right-wing supporters to their ranks. In New York City alone, three such protests have taken place in the last week, with right-wing demonstrators violently confronting counter-protesters trying to shut down these blatant displays of racist intimidation.

Just last weekend in the Brooklyn neighborhood of Bay Ridge, there were two pro-cop demonstrations involving thousands of people and protected by a heavy police presence. Both rallies resulted in clashes between right-wing demonstrators spewing racist, homophobic, and sexist slurs and the Black Lives Matter protesters who organized counter-protesters against the rallies.

Yesterday in Bay Ridge, there was a march for “blue lives.” None of the marchers were wearing masks. Counterprotesters showed up to support the Black Lives Matter and anti-police movement. They were berated and threatened by the marches. Let’s continue to show up! There is another counter protest TODAY at 86th Street and 4th Ave in Bay Ridge.

Though the counter-protesters were outnumbered in each case and the Blue Lives Matter protesters openly harassed and physically attacked counter-protesters, the cops were quick to step in to defend the pro-cop, white supremacist demonstrations; they brutalized and arrested protesters and even tased counter-protester Robert Bolden. As always the police intervened to show exactly who they exist to serve and protect.

These tensions escalated on July 15 at a pro-cop rally and counter-protest on the Brooklyn Bridge. Two demonstrations — one called by Black-led religious organizations and the other by the pro-cop Sergeants Benevolent Association — were organized to march from Brooklyn into Manhattan via the Brooklyn Bridge. Participants in the two rallies, who, combined, totalled over 1000 people, joined together to pray in a show of “unity” between church groups and NYPD. A uniformed police officer joined the rally later in the day to give a speech denouncing Black Lives Matter protesters. As the Gothamist reported, organizers of the religious contingent denounced Blue Lives Matter protesters for hi-jacking a rally that had originally been planned for reforms to policing.

Attempting to stop the pro-cop march from crossing the Brooklyn Bridge to City Hall, about 30 protesters linked arms and blocked the road. A line of riot cops immediately charged the line, beating and grabbing protesters as they backed up towards Manhattan. Video from that morning clearly shows how the police targeted the peaceful demonstrators, beating them and violently arresting whoever they could tackle.

One clip shows a person being grabbed by the hair by one cop as they are put in restraints by another. According to official estimates, 37 people were arrested on the bridge and many are still being detained.

Police were brutalizing and arresting peaceful protesters on the Brooklyn Bridge in order to make room for the “blue lives matter” protest supported by clergy. #BlackLivesMatter #FTP #AbolishThePolice

Yet the only story being reported by major news outlets tells how four NYPD officers sustained “serious injuries” by protesters on the bridge. Images of the four cops, including NYPD Chief of Department Terence Monahan, quickly spread across Twitter and other social media and news sites. In its official statement on these events, the NYPD stated, “This is not peaceful protest, this will not be tolerated.” This threat was quickly echoed across mainstream media, reviving the narrative from the early days of the movement that the protests are violent, justifying extreme repression of protesters by police.

These reports bemoan the minor injuries of four cops sent to terrorize anti-racist protesters while completely ignoring the repression the NYPD has inflicted on protesters and the department’s long history of racist violence against people and communities of color. They equate brutal beatings to mere “scuffles” and paint protesters as violent “antagonists” looking for a fight. But the injuries of these police officers are nothing compared to the endless well of repression inflicted against protesters by police forces across the country with the full blessing of elected officials.

Hundreds of people have been injured by police since the Black Lives Matter protests broke out in May. At least eight people have been blinded by the use of “non-lethal” weapons and the police have taken the lives of countless people since the protests began. The NYPD has been at the forefront of this repression. In May, videos circulated showing police driving an SUV directly into a crowd of protesters. NYPD officers used the city-wide curfew to justify the use of pepper spray, tear gas, and clubs, as well as to make mass arrests.

Right now, 1300 people in New York City are facing charges and fines for breaking curfew. Others are facing much more serious charges and face sentences in prison for taking part in the nationwide movement against police brutality and racism. All of this repression is sanctioned and overseen by Democratic Mayor Bill de Blasio and Democratic Governor Andrew Cuomo. The violence on the Brooklyn Bridge this week represents a re-escalation of repression to both sway public opinion against the protests and try to regain some of the legitimacy lost by the police over the last couple of months. But it also reveals a growing rightward reaction to the protests that is mobilizing against the movement.

In the streets, in our community organizations, and in our workplaces, we must denounce this repression at every turn. Protesters’ self-defense is not the same as the brutal violence that the state wields to keep hold of its control over the oppressed. We must demand the freedom of all arrested protesters and political prisoners, and the dropping of all charges against them.