For 10 minutes, cops pointed guns at 12-14 years old Black boys who lay on the ground, sobbing and begging for their lives. 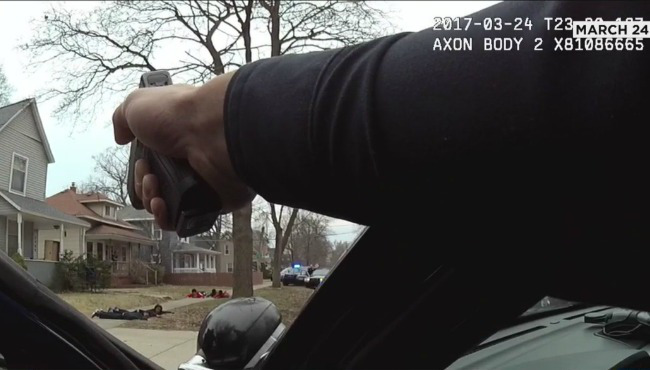 In Grand Rapids, Michigan, several police officers held 5 young black boys at gunpoint for over 10 minutes. The boys were between 12 and 14 years old– middle school students. They were returning home after a game of basketball when the cops surrounded them with police cars, took out their guns and ordered the children to get on the ground.

As the boys lay on the concrete, they cried out “What did we do? ” and “I don’t want to die.” One boy pleaded for the cops to put their guns down and another sobbed. This went on for 10 whole minutes.

This incident occurred in March, but the footage was just released by the police department. The mayor and the police chief have since apologized. However, the police chief also said that the officers acted professionally. The police involved have not been reprimanded. In fact, the police union vehemently defended the cops and argued that no change of policy is needed. That is why Left Voice argues that there should be no cops in our unions, as the police unions defend our oppressors and not the interests of the working class and oppressed.

These kinds of incidents are already everyday occurrences. This is unique only in that there is a video. We can expect that occurrences like this one will increase under the Trump administration with his promises of “law and order.” We, the working class and oppressed, must organize against police violence at our workplaces, schools and neighborhoods.