Cops in Louisville Murdered Another Black Man. His Name Is David McAtee.

In yet another in a string of police murders, Louisville cops murdered David McAtee, a local barbeque chef. They left his body lying in the street for 12 hours, reminding us of the level of contempt they have for the lives of Black people. 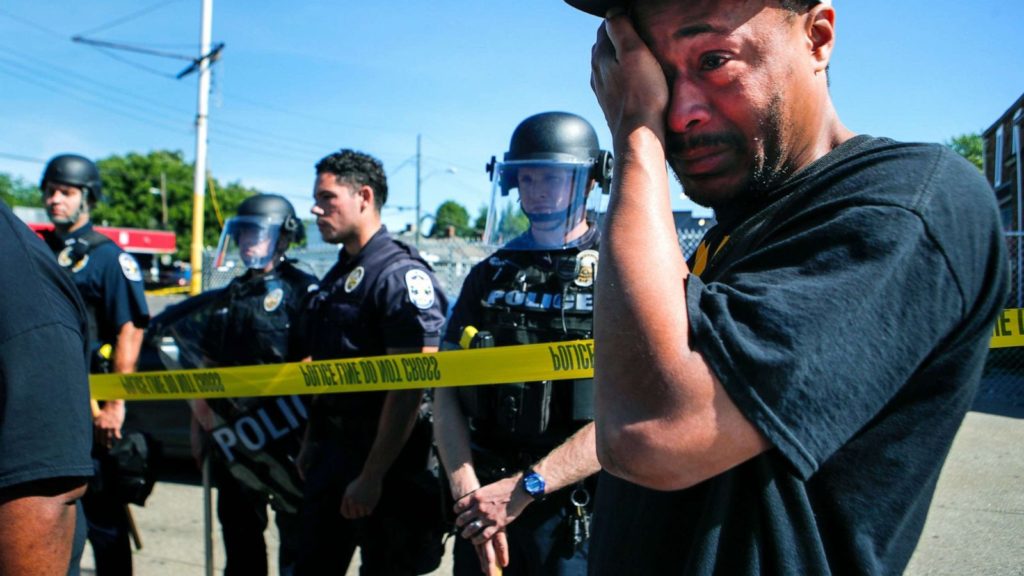 Will Pitts, friend of David McAtee, after McAtee was shot and killed by Kentucky National Guard and LMPD. (Image: Matt Stone/Courier Journal via USA TODAY Network)

Last night, cops and national guard troops fired into a crowd in a parking lot in Louisville, Kentucky, killing 53-year-old David McAtee. Two of the police at the front of the scene had turned off their body cameras, making it abundantly clear how strongly they feel they can shoot people down in the streets with impunity.

McAtee was loved by his community. He offered food to those who needed it, catering community events for free, and even offering free meals to police when they came in.

After killing him, the police left his body on the ground in front of his mother, Odessa Riley, and other family members and friends for 12 hours before doing anything. Riley was told to just “wait for the coroner.”

Police Chief Steve Conrad defended the police, saying that the cops and the national guard were trying to “clear the lot,” and claimed they had been shot at.

Louisville police officer Katie Crews was one of the two cops who had turned off her body cam. Social media posts surfaced showing her mocking and threatening protestors, giving insight into the state of mind of police officers at the recent protests. Under a photo of a protester who had been standing across from her at a demonstration, she wrote: “I hope the pepper balls that she got lit up with a little later on hurt… Come back and get ya some more ole girl, I’ll be on the line again tonight.”

U.S. Attorneys, Louisville Mayor Greg Fischer, and the state police are all scrambling to promise “internal investigations,” and Fischer has fired Chief Conrad in the wake of the incident. This is obvious and meaningless political damage control, especially considering Conrad was already scheduled to retire at the end of the month and will retain his full pension. The new chief of police promised to “review the entire incident to determine if there are any other policy violations that occurred.” Yet it’s clear that what occurred is exactly in line with the policy of the murderous police that continue to terrorize Black communities during these protests.

Politicians on both sides of the aisle continue to paint protesters as the violent ones, militarize our streets to impose curfews, and continue to send killer cops and the National Guard in our communities. We demand justice for David, for George, for Sean Reed, Sandra Bland, Eric Garner and everyone killed by this murderous state.

The state, which continues to use its armed wing to kill Black people, is responsible for all of these deaths.