Protesters showed up in solidarity with detained immigrants on hunger strike and to call for the abolition of ICE. The police attacked. 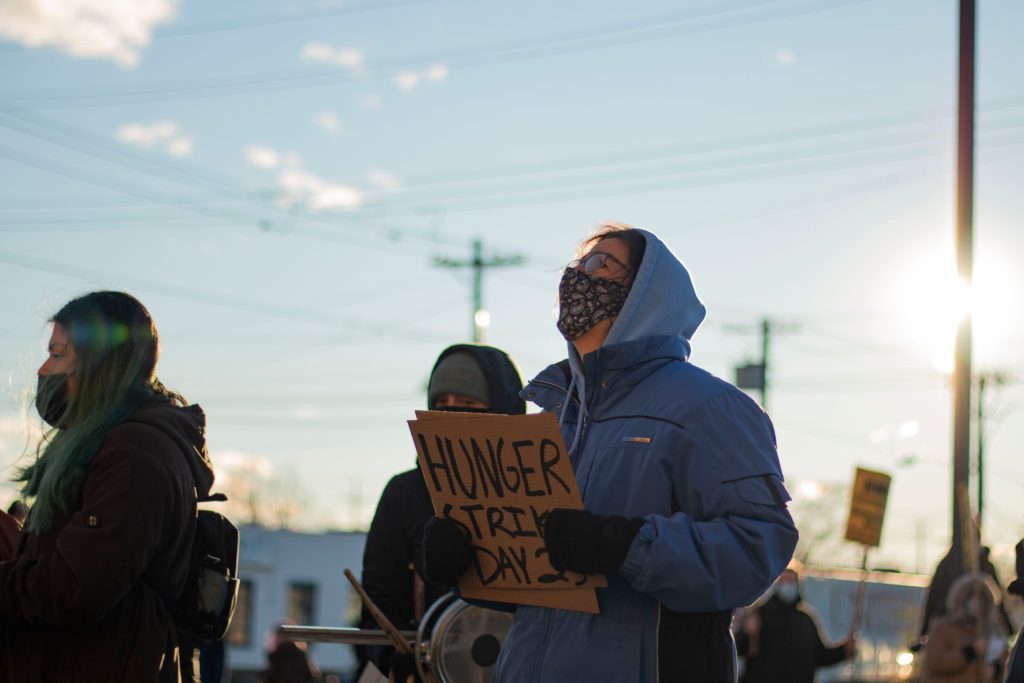 On Friday, December 11, Bergen County Jail police used violence to shut down a demonstration in solidarity with ICE-detained hunger strikers in the jail. The action, which was scheduled to run from 1-4 p.m. outside the facility in Hackensack, NJ, ended early when a group of cops singled out one of the few Black protesters in the crowd and violently arrested them. Shortly afterward, they threatened to arrest anyone who remained outside the jail.

Protests in front of the jail have had a strong turnout over the last several weeks, especially on weekends. One of the regular protesters, who asked to remain anonymous for their safety,  described the scene of an earlier action which took place on Sunday. “We took the street and we marched over cause we had enough people. There were a ton of people. A wife of one of the detainees spoke and just like the heartbreak in her voice, it was unfathomable. Her kid had a sign that said ‘Please release my daddy.’”

The police claimed that they were arresting the protester because he refused to remain on the other side of the barricade that had only been constructed that Tuesday. After an exchange in which the protester explained that he wasn’t on private property and his taxes paid for the jail where immigrants are being held, the cops attacked him and other protesters who were trying to protect him. While all that took place, immigrants separated from their families were in the jail where they are at a greater risk of catching Covid-19.

Multiple protesters at the December action said that cops have gotten more aggressive as the protests have continued into the fourth week. Actions have taken place outside the jail consistently since November 27, with a loyal group of people showing up to demand the release of the hunger strikers from the jail and voice support for the greater movement to abolish ICE and the police.

Ridgewood for Black Liberation, one of the groups involved in organizing solidarity actions for the hunger strikers, has called for jail support for the arrested protester. Many of the demonstrators who were forced away from the jail stayed within the area, organizing legal support.

The protest and the police response perfectly highlights the inherent racism and violence of the police. The police used violence to physically separate the group and silence demands for the safety of those in the jail. Enforcing borders and dividing the working class is what cops have always been paid to do and this was just one more example of that. In response it is imperative that the working class continue to support the abolition movement and connect the struggle for the abolition of ICE and the police to the broader struggle against the capitalist system. It will be a long fight, but the consistent, multi-week-spanning solidarity of the Bergen County Jail protesters shows that people are willing to see it through to the end. Ridgewood for Black Liberation has already announced that they’ll be returning tomorrow.