Coronavirus and the Racial Regime in Slovakia: Roma and the State Response to the Pandemic

As the coronavirus pandemic has begun to take foot in Slovakia, the country’s largest ethnic minority — the Roma — are already starting to feel the effects of increased militarization and police presence in their communities. Without the guarantee of proper social and health services necessary to combat the pandemic, Slovakia will condemn the Roma to die, a fate all too well known by the Roma people. 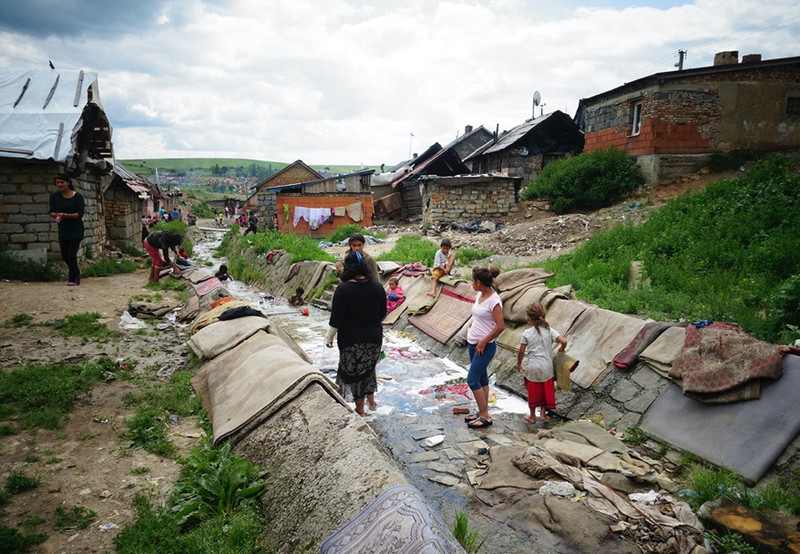 In the moments of heightened crisis, one of the first strategies of a state is a deferral of its pretense of social solidarity, directing most of its energies towards combating the threat at hand. This tendency often leads to postponing of its efforts to negotiate difficult social, economic, and racial relations. In many states the diverse and conflicting nature of the populations gives way to rapidly consolidating sentiments of ethno-nationalism. The situation in Slovakia after the outbreak of the novel coronavirus is a painfully apt example. The country was among the first ones in Europe to close its borders, shut down all public institutions, and reduce its social and economic life to bare minimum. This shutdown came as a welcomed move from the position of a citizen with full rights and a guarantee of protection by the state. Slovakia, however, is a home to a sizable Roma minority (around 8% of the total population) whose position within the state has long been precarious, to say the least. For these groups the coronavirus and the state response to its threat means further destabilisation of their social situation and a demonstration of a continuous exclusion of the Roma from the benefits of full citizenship. They, unlike the ethnic Slovaks, do not de facto enjoy the inalienable right for state protection in a critical situation. Rather, due to their overwhelmingly destitute living situation and the popular discourses about the low levels of hygiene in their communities, they are often approached as an ethnic group potentially threatening public health.

In the moment of crisis, the contours of citizenship exclude those who, for various historical and structural reasons, already live on the margins of society. One of the first steps of the state was the increased use of police forces and a potential deployment of the  military to oversee the welfare distribution processes in the predominantly Roma areas. On the news, the whole nation watched the Roma recipients of welfare support being commanded by armed police officers and forced by groups of local “whites” to excessively use hand sanitizer before they were allowed to leave their settlement and enter the “civilised spaces.” The whole nation watched it, and for most people it seemed a normal, indeed justified, and necessary, act. The Prime Minister announced this measure in the following manner: “The process and safety will be supervised by, firstly, private security guards used by the post office, as well as officers of municipal and state police, and in the most critical places the military as well. …We will attempt to ensure that every client will undergo a disinfection of hands…”

In crude words, the attitude is that in normal times we might engage in social and  political experiments with Roma inclusion, but in moments like these, such projects should be put on hold and we must turn to militarisation of their communities to protect the greater good of the nation.

There is a potential historical parallel to be drawn. If one were to identify a historical event most actively neglected in the national historiography, it would probably be the Roma Holocaust during the formation of the Nazi-allied Slovak State. In one of the few complete accounts of the treatment of Roma during the period, the book Roma Persecutions in the Slovak Republic (1939 – 1945) by Karol Janas, one finds a number of uncanny similarities with the state response to the coronavirus. The author writes that “Slovakia was an occupied country and that changed the attitudes of state offices towards the Roma ethnicity” (Janas, p.55), and continues by describing the establishment of a special detainment camp for the Roma with significantly stricter security measures than ‘white’ labour camps. There are two possible approaches the state can take in the moment of radical disruption of its functioning; it can step in and strengthen the measures that would protect the livelihood, human rights, and dignity of its most vulnerable denizens, or it can do what the Slovak state has done repeatedly. That is, to redraw the definition of a righteous citizen along ethnic lines and channel the state’s administrative power to keep the racialised bodies outside of its protective network.

Taking the potential historical comparison further, there was an outbreak of typhoid in the country during the Nazi period, especially in poorer, less developed regions and communities. At that moment, the situation in the Roma camps was particularly critical: “Due to the ongoing war, medicines and medical tools were in short supply all over Slovakia. In the camps their lack was critical, preventing the doctors from treating even common illnesses. … Most of the deaths were of young children. It is almost certain that had they not been confined in the camp, they would not get sick and would continue living” (Janas, p.89)

When one of the first measures to address the virus the government resorted to in Roma communities was the deployment of police force, what guarantee is there that today’s state will not undertake politics of radical detainment again? With the possibility of nation-wide curfew on the table, the living spaces of many Roma communities might become entirely governed by the logic of military state. The spatiality of race in Slovakia has been in the making since the moment Empress Maria Theresa outlawed nomadic and migratory lifestyle and forced travelling peoples into settling down on the outskirts of urban centres in the mid-18th century. For more than two centuries after, spatial segregation has continued to develop, solidified by the racial politics pursued by the array of political regimes the country went through. This legacy means that today, in every town or village with a countable Roma population, this population is concentrated in particular areas which can be easily identified as ‘Gypsy areas’. This concentration means that urban politics can be framed in spatial terms rather than in terms of race, resulting in a situation similar to the redlining of US districts. While this is a racial regime that allows for great discrimination, exclusion, and oppression during the times of ‘normalcy’, the boundaries of state power are extended and remain unchecked even more in emergencies like today’s pandemic. What role will the spatial segregation of Roma play when the coronavirus begins to spread through Slovakia exponentially faster (as the mathematical models of the Institute of Health Politics predict) remains to be seen. However, historical precedents together with heightened levels of militarisation of ethnic communities, suggest that the state might take measures that will only deepen the gap between the Roma and the ‘whites’ in the country.

According to the multi-ministerial report published in March 2020, the Roma communities enjoy the lowest levels of accessibility of appropriate healthcare. Combined with the destitute conditions in many Roma settlements—in some cases including a lack of access to clean drinking water, unsatisfactory sanitation and public hygiene, and a widespread risk of food insecurity—there is a reasonable fear that even the first couple of cases that would eventually lead to an outbreak could be deadly as their impact would be felt more drastically. The PM expressed similar sentiments in less drastic words: “A detailed plan for the Roma settlement with regards to the coronavirus is not yet on the table. It could become really dramatic and really fast there.” Comments like these betray the racial element of the state response to coronavirus. Furthermore, they show that the state might not act with adequate determination to combat the virus and prevent human suffering in the marginalised Roma communities.

Using the rhetoric that equates full Slovak citizenship with Slovak ethnicity makes it easy to forget that ethnic minorities in the country are entitled to the same rights and freedoms as the ethnic majority. Therefore, the Roma should be recognized in the face of the state authorities and law as what they are: full rights-bearing citizens. The politics of human rights might be rightfully criticised for its complacency with existing structures of oppression and universalisation of experience. Nevertheless, I believe in cases like these deploying the claims to human rights critically has an enormous potential. In times when the state is operating under the conditions of unprecedented emergency, the questions of Roma rights cannot be limited to terms of  recognition and representation. In times of ‘normalcy’, the structural marginalisation at work in Roma communities is contributing to a life expectancy 6-7 years shorter than the national average. However, during the pandemic, it is possible that these discrepancies will increase as the regime of racial segregation solidifies further. Perhaps one of the ways to prevent that from happening is calling for replacement of the regime of racial securitisation with a universal provision of social and health services necessary to combat the pandemic.