Trump is continually emboldening white supremacists and terrorist gangs that attack protesters. How do we stop the rise of the Right? The Democrats and their supporters tell us we need to vote for the “lesser evil” to stop fascism. But was that enough to stop Hitler? 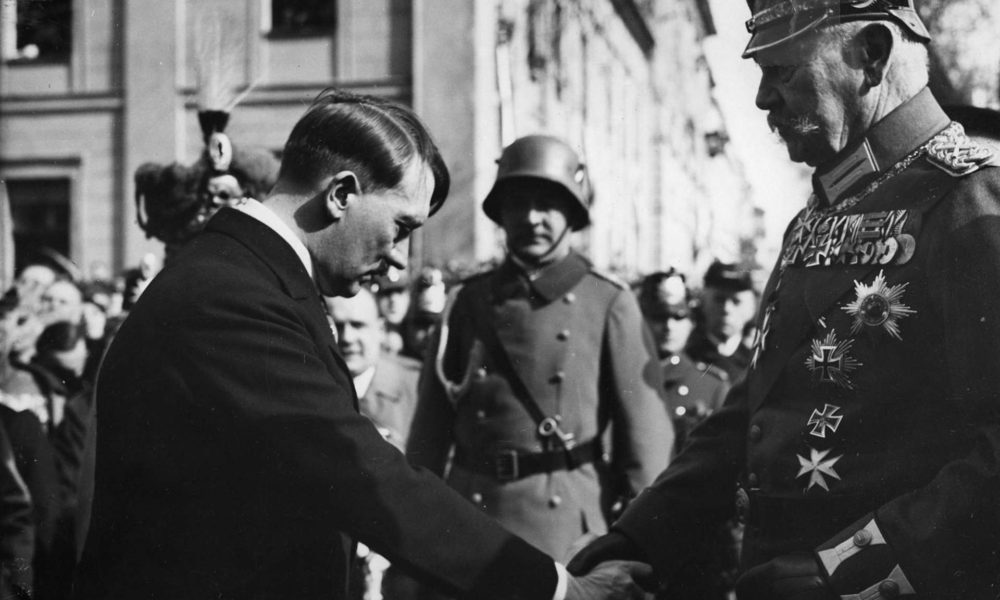 Many people think Adolf Hitler came to power in Germany via elections — Bernie Sanders said something along those lines back in 2015, sparking much debate. And the conclusion seems obvious: if only more people had voted against Hitler… Noam Chomsky says this is why we need to vote for Biden.

The parallels between Donald Trump and Hitler are often exaggerated by liberals. Trump is no Nazi, and the United States is not on the brink of fascism. Trump is reactionary to the core. Yet he is implementing his reactionary policies through the existing bourgeois state, and not relying on petty-bourgeois paramilitary formations. We can say that Trump’s government represents a kind of weak Bonapartism.

But we can still ask: would voting have stopped Hitler? The National Socialist German Workers Party or NSDAP — better known as the Nazis — never won more than 37 percent of the vote in any national election. Hitler’s road to power was more complicated.

In early 1932, the German Reich held a presidential election. The 84-year-old Paul von Hindenburg had already served one seven-year-term. The parties of the Right called on the World War One general to run for reelection. Hindenburg agreed, and appealed to the “spirit of 1914.” For that old reactionary, this had been a time of national unity — for the working class, it had been a time when millions of young men were forced into trenches, strikes and protests of any kind were banned, and countless socialists like Rosa Luxemburg were thrown into jail. This is exactly what Hindenburg stood for.

Germany’s constitution had been written while the revolution of 1918-19 was being drowned in blood. The social democrats had allied with the military and right-wing paramilitaries to massacre thousands of revolutionary workers. As a result, the new constitution was only democratic on paper. The Reich’s quasi-monarchical president could use the infamous Article 48 to declare a state of emergency and take unrestricted power. And the first president of the German republic, the social democrat Friedrich Ebert, used these emergency powers 136 times — he would depose state governments deemed too “left-wing” and have the military repress workers’ protests.

Theoretically, Germany had a parliamentary system with a government elected by a majority in the Reichstag. But in 1930, Hindenburg installed a minority government that ruled by decree.

In the previous presidential elections of 1925, the social democrats and the communists alike had opposed Hindenburg as a representative of the worst reaction. But in 1932, an even more right-wing figure entered the scene: Adolf Hitler.

The German workers’ movement was enormous — by 1932, the Social Democratic Party (SPD) had a million members, and the Communist Party (KPD) had a million as well. 1929 marked the beginning of a historic crisis of global capitalism, and the German economy collapsed. Six million workers were unemployed, and many of them radicalized. By the end of 1932, the communists got 37% of votes in Berlin.

The middle classes were equally pummeled by the crisis. Many of them radicalized to the right and joined the Nazis. This obscure party was able to jump from 2.6% of the vote in 1928 to 18.3% in 1930.

When Hindenburg’s term ran out, there was serious fear that Hitler could win the most votes in the first round of the presidential election. The SPD could have mobilized their millions of supporters against both the conservative and the fascist Right. But instead, they decided to stick to purely electoral means, declaring that workers needed “to do everything to make sure a Reich president loyal to the constitution sits” in the presidential palace. Their slogan was to “Beat Hitler!” — by which they meant voting for Hindenburg. They were convinced that this “lesser evil” would stop the rise of the Nazis.

The KPD, in contrast, presented their own candidate: the dockworker and party chairman Ernst Thälmann. The KPD declared that “voting Hindenburg means voting Hitler” — which was sadly correct.

In the end, Hindenburg won just over 50 percent of the vote, with 37 percent for Hitler and 10 percent for Thälmann. The SPD hailed this as a “triumph of democracy.” But what did the new “lesser evil” president do?

Hindenburg’s first move was to replace the chancellor. The right-wing Heinrich Brüning made room for the even more right-wing Franz von Papen. Brüning had taken some limited steps to hold back Hitler’s stormtroopers, whereas Papen gave them free reign.

So what was the SPD to do? They could have fought back against this coup d’etat in Prussia. The KPD proposed organizing a general strike together. But instead, they decided to capitulate without a fight. This was, after all, the “constitutional” way of doing things. For millions of workers who still put faith in social democracy, this defeat without a fight was demoralizing — far more demoralizing than a defeat in pitched battle would have been.

The demoralization of the workers’ movement allowed Hindenburg to take another step. As the year 1932 closed, with continued growth for the communists and intense strikes, Germany’s biggest capitalists pushed for Hitler to be named chancellor. Hindenburg fulfilled their wish on January 30, 1933, installing a new coalition government made up of the NSDAP and other right-wing parties.

A few days later, Hindenburg suspended the freedom of speech and of assembly — by the end of the month, he suspended all democratic rights. The Communist Party was prohibited, and not much later the Social Democratic Party and the trade unions were proscribed as well. When Hindenburg died in mid-1934, Hitler became the Führer, the absolute ruler of a fascist state.

So what did voting for Hindenburg accomplish? As Hal Draper put it in 1967, “the people voted for the Lesser Evil and got both.”

How could Hitler have been stopped? On a purely electoral level, the workers’ movement could have presented its own candidates for the presidency. As historian Isaac Deutscher wrote, “A Socialist-Communist candidate was still sure to poll more votes than Hitler or any other contestant.” In fact, in the parliamentary elections of that year, the SPD and the KPD — standing separately — won 36-37% of votes.

But Hitler’s stormtroopers were not primarily relying on elections anyway. Their modus operandi was organized terror against the workers’ movement, and for this they got support from big capitalists who needed paramilitary support to hold up their crumbling system.

The key to stopping them would have been an anti-fascist united front: organized self-defense, drawing in communist, social democratic, trade unionist, and unorganized workers. This is what the Communist International had called for under Lenin’s leadership. This is what Leon Trotsky advocated in his writings on Germany. In a few cities in Germany where Trotsky’s supporters were strong, they were able to initiate united working-class actions that drove out the Nazis entirely.

Donald Trump is not a fascist — and Joe Biden is no Hindenburg either.

But we can say that Trump’s administration is encouraging the growth of a far Right that includes openly fascist groups. The way to stop these fascists is not by placing hopes in a “lesser evil” like Joe Biden. Biden, after all, spent a career promoting racist, sexist, militaristic, and authoritarian policies, creating the reactionary swamp in which Trump’s support could grow.

Just as in 1932 in Germany, the key to stopping the Right is united working-class action. It means the broadest possible front of workers and the oppressed to oppose all right-wing violence — to stop their demonstrations and break up their meetings. It means calling on all working-class organizations, including unions, to take up the fight to defend basic democratic rights. And crucially, it means fighting for the political independence from all wings of the bourgeoisie — be they the “greater evil” or the “lesser evil.”

When any part of the workers’ movement places their hopes in a “less evil” wing of the ruling class that will supposedly protect us from the Right, they are disarming themselves. As Germany’s social democrats had to learn, a Hindenburg is no protection against a Hitler.