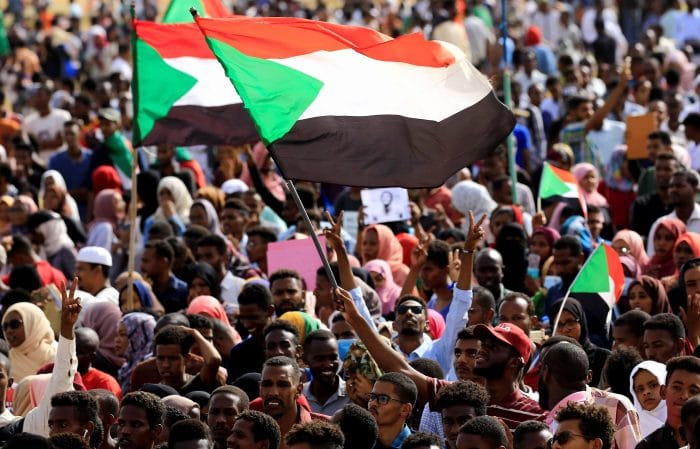 On Monday October 25, general Abdel Fattah al-Burhan directed an army-led coup d’état in Sudan against Abdalla Hamdok’s civil government, which was in the midst of leading Sudan’s so-called “transition to democracy.” This transition resulted from an agreement between the forces mobilized in 2018’s “bread riots,” which brought an end to Omar al-Bashir’s life-long dictatorship. After his downfall, the army maintained power in the face of mass protests that lasted for nearly a year in the capital city of Khartoum, demanding a civil government.

The leadership of the “Alliance for Liberty and Change” was gradually abandoning the protests’ demands over the course of the struggle, until reaching an agreement with the military to share power until elections in 2022. Crucially, this agreement left the military with a monopoly on arms, strategic negotiations, and the realm of international politics. From the beginning, the coexistence of the military and civilian wing of government was uneasy, and the coup is the final result of these unresolved tensions.

For a deeper understanding of the situation in Sudan, and for a broader picture of the political situation on the African continent, we spoke with historian of Africa Omer Freixa, lecturer at UBA and UNTREF, who is a researcher and writer for many Spanish-language projects such as “Africa is not a country” in the journal “El país, Mundo Negro, Africaye, Fundación Sur,” and is a columnist for Infobae.

The military and civilian wings of the government have been at odds for some time, and both sides have mobilized in the streets. What prospects do you see for last week’s coup in Sudan? How have such situations played out in other instances where a country was in a “transition to democracy”?

Realistically, the transition towards democracy may be tricky in Sudan, since it has lived between states of dictatorship and civil war for the majority of its independence. It has rarely enjoyed anything like “democracy” in the full sense of the word. Monday’s coup confirms once again a certain characteristic present in Sudan’s essence; the strength of the military since independence. It has intervened in domestic politics dozens of times, with attempted or successful coups in 1958, 1969, 1989, etc. The alliance between military and civilian wings was quite uncomfortable, and it was always a question of how long the civilian government would last before the military got rid of them. Last year on the 21st of September, a faction of the army, presumably linked to ex-dictator Omar al-Bashir, attempted to take power by force, although the attempt was thwarted. With these precedents, the events of the October 25th can’t have taken anyone by surprise.

To have a true democratic transition—this is not yet known because its fate is uncertain, but what is certain is that the coup of the past few days has reversed the positive reformist measures introduced as corrections to the most disastrous excesses of the dictatorship. These included the improvement of women’s rights, curtailing the most disgraceful practices of the Islamist regime, and, in matters of foreign policy, the consolidation of relations with important actors such as Egypt, Saudia Arabia, Israel, and the U.S. All of these aimed to end the status as a pariah nation which Sudan incurred under Bashir’s dictatorship.

To get out from under military domination, Sudan needs a roadmap that dares to imagine a democratic regime, in which the military command commits to defending democracy, not to “protecting” it… or overthrowing it directly, as happened in Egypt. This is what has been happening in Sudan for the past two and a half years; the military has been waiting for the right moment to boycott the transition, and, after a sort of ultimatum, Burhan did exactly that, with the complicity of external powers.

We’ve seen that various social organizations, such as the Professional Association of Sudan (an association of several syndicates), many of whom formed part of the civil wing of the transitional government and who played a role in the 2019 mobilizations, have issued calls to resist the coup. How do you see the popular resistance? Does it compare to the events of 2019? What has changed in the relationship between society and the civil government?

Civil protest has not diminished. Starting immediately after the recent coup, activists and protestors took to the streets in a fashion similar to that seen in the waning days of 2018 before the fall of Bashir. The results have been tragic in both cases because of state repression, both from the military government and from the joint power-sharing arrangement with the transitional civil government, although in the past few days the repression has been tempered somewhat. That is to say, both in 2019 and now, civil society in Sudan is capable of calling huge protests from across the nation. Additionally, the state of the economy and the general living conditions are pushing people to mobilize. Since 2011, there has been backlash from the independence of Southern Sudan, which deprived Sudan of 75 percent of its petroleum production. Under Bashir, the catalyst for protests was the price of bread, and for more than two years, the economic situation has not improved. In 2020, Sudan had the third-worst rate of inflation of any country in the world, in excess of 160 percent annually; in a word, the economy just deteriorates as time passes. For example, inflation in 2012 was at 47 percent until November, but went down in 2013.

In short, despite the fact that Burhan has promised the re-establishment of a civilian government and elections in a year and a half, and that he will negotiate with the deposed Premier Hamdok, many fear that the military will not keep its word, and that we’ll see a similar situation to what happened to al-Sisi in neighboring Egypt. Nevertheless, unlike what happened in their 2013 coup, the safeguards are, firstly, a broad public support for the transitional government and, secondly, much higher mistrust of the military and the Islamist factions sympathetic to it.

Some analysts suspect that there may be international forces behind the coup. What’s your opinion? What links can be drawn between the position of Sudan on the international stage and, in particular, the conflict in Ethiopia surrounding the Renaissance Dam?

There has certainly been some support for the coup from certain regional powers, like in the case of Saudi Arabia, the UAE, and neighboring Egypt, or the much larger powers like China and Russia, who are anxious to not interrupt their lavish business dealings with an ally. The Persian Gulf states’ support has been signaled by their support for the Sudanese military and the ongoing war in Yemen, and by their increasing closeness to Washington, even though the U.S. has condemned the coup. This is in contrast to Israel, which fully supports Burhan’s movement.

Cairo has found an important southern ally to help it reassert its rights to exploit the waters of the Nile, amidst the ongoing construction of the Grand Ethiopian Renaissance Dam (GERD), which Egypt and Sudan see as a threat, essentially cornering all of northern Africa. Attempts to arbitrate this dispute have thus far been dissatisfactory. Egypt needs stronger support from Sudan to reinforce its claims against the Ethiopian government, and Burhan seems supportive of much more aggressive politics regarding Sudan’s border disputes with Addis Ababa.

We’re seeing various African countries navigating some complex situations, from the struggles of the masses against their governments (like in Nigeria and Algeria), to coups d’état or the fight against radical Islamist organisations, as well as the regrouping of France’s interventions in the Sahel. There have been military incursions by Russia, growing investment from China and Turkey, all in a climate of profound socioeconomic problems stemming from climate change, which is causing the desertification of the Sahel. How do you see the broader situation in Africa in the context of global competition between the major powers? What vision do you have for the continent?

The prospects for the coming years are not great, but such forecasts for such a diverse and gigantic reality can never be entirely accurate. Beyond its own internal variables, Africa needs a second liberation, this time from neocolonialism. The weight of China is enormous, for example, while new players such as Turkey and Israel are also making inroads, and those who lost ground in the past are today looking to recover it — Russia being a case in point.

For their part, the traditional foreign colonial powers like Great Britain and France have no intention of pulling back, even in the face of increased competition. African governments must enact their own agendas, rather than depending on foreign interference or aid. One symptom of Sudan’s external dependence was how, as soon as the coup happened, the U.S. punished them by suspending development aid and freezing loans. It may sound utopian, but what is needed is an “Africa for Africans.” The trajectory seems to be quite the opposite; the societies of Africa cannot take advantage of their riches. For now, the inability to contain such a dangerous phenomenon as radical Islamism indicates that the affected countries are still extremely dependent on international cooperation. Not all of Africa’s external relations are explained by foreign interventions, but it’s a variable that explains a great deal of local realities. This reality should not suggest that the solution is that the West should always come to the rescue of African peoples, but this pattern continues nonetheless.

Originally published in Spanish on November 3 in La Izquierda Diario.