Bolivia’s Supreme Electoral Tribunal (TSE) has approved the postponement of the general elections for the fourth time; this time bringing them to October 18. Peasant unions and federations as well as the Bolivian Workers’ Central have declared an emergency and announced mobilizations. 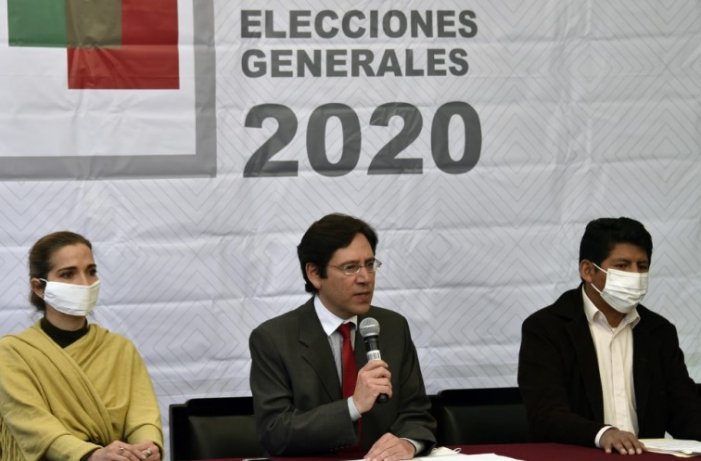 On Thursday, Bolivia’s Supreme Electoral Tribunal (TSE) approved the postponement of the general elections for the fourth time; this time bringing them to October 18. The TSE resolution circumvented the Plurinational Legislative Assembly (PLA; the national assembly of Bolivia). Peasant unions and federations, as well as the Bolivian Workers’ Central (COB), declared an emergency and announced mobilizations. The decision to postpone the elections was welcomed by the United Nations and by all competing political parties except the MAS, the party headed by Evo Morales.

At the press conference announcing this decision, Salvador Romero, the president of the TSE, claimed that setting a new date is a power of the electoral body and not the PLA. Similarly, weeks ago they proceeded with the promotion by decree of the military coup perpetrators, ignoring the powers of the Senate. It would seem that the government of Jeanine Áñez and the TSE have decided to proceed as if there were no parliament; without dissolving it but taking away all its power.

This announcement was approved by all political forces on the coup spectrum, including the moderate right wing led by Carlos Mesa, the presidential candidate for Comunidad Ciudadana, a centrist political coalition. In addition to this show of support, the United Nations has issued a statement asking political and social actors to respect the decision to postpone the elections.

In the coming days, the TSE will have to consider the requests for the ban of MAS. This possible ban is due to the fact that Luis Arce Catacora, MAS candidate for president and former Minister of Economy, has presented the results of non-authorized polls in news programs, which can be sanctioned by law with a ban. This law, applied by the MAS to ban right-wing candidates in 2014, is now being used against them. Members of Evo Morales’ party preventatively presented two actions of unconstitutionality of the law to avoid the possible proscription.

If the ban of MAS is confirmed, Bolivia would experience elections in which the party which would receive the most votes would not be able to participate, in a type of coup d’état and political persecution.

Faced with this situation, Javo Ferreira of the Fourth International Revolutionary Workers League (LOR-CI) — the sister organization of Left Voice in Bolivia — said, “We did not give political support to the MAS before nor now, but we denounce these attempts at proscription by taking away from the people the basic right to elect the representatives they want, just as we have previously repudiated the proscription that the MAS carried out on sectors of the center-right that were the winning candidates in Beni, and thanks to this gag law the MAS was able to win the governorship of that state in alliance with the local MNR (National Reformist Movement).”

This new postponement is justified by the growing number of COVID-19 infections and deaths in the country. The situation has been exacerbated by the policies of the coup government which, from the beginning, has refused to implement massive testing to detect areas of infection and design a serious plan to confront the pandemic.

The coup leaders’ management of the pandemic has privileged the use of the police and the military to carry out a militarized quarantine almost as if it were the only way to face the health crisis. After more than 100 days of quarantine, they have also done nothing to strengthen hospital facilities or provide basic safety conditions for health workers who are increasingly becoming infected. On the contrary, there have been cases of corruption in purchases with million-peso surcharges. They have prioritized the profits of laboratories, pharmacies and private clinics in which more than 50% of the intensive care units available in the country are concentrated, over the people’s health.

This is important to point out because the idea that “life comes first”, used to keep postponing elections, has no basis in reality. Today the country is immersed in a situation of sanitary collapse in which dozens of dead bodies pile in the streets due to the coronavirus. A person who catches the virus is virtually condemned to die because there is no possibility of accessing medical care. This is the responsibility of the coup leaders who have criminally managed the pandemic.

The postponement of the elections is fueling discontent towards the  Áñez Government by popular sectors that have placed all their expectations in the September 6 election.

Among the sectors that have expressed their rejection are the Unity Pact, the Federation of Peasants of the Department of La Paz “Tupac Katari”, the Mallkus of Kara Kara and the Ayllus of Northern Potosí and the 5 Provinces, the coordinator of the 6 Federations of the Tropic of Cochabamba, the Interculturals of Santa Cruz and the Bolivian Central Worker (COB) that has declared itself in a state of emergency.

While the coup d’état tightens the most reactionary mechanisms of this supposed return to “democracy”, MAS plays along despite having a parliamentary majority. The hope it has put in the elections is diverting the organization and struggle that workers, indigenous peoples, women’s movement, and students must look for.

From its parliamentary majority, the MAS could vote for a quarantine salary, free mass testing for the poor, and nationalization of the private clinics that are profiting off people’s health. The desperation from hunger will not yield to the electoral calendar.

Javo Ferreira also assured that “with the racist and clerical right, there is no negotiation.  The struggle of the sectors affected by the pandemic and the economic crisis must be organized. It is the only way to fight for the interests and needs of the workers in the countryside and the city, of the indigenous and peasant communities, of the women and the youth, and to impose a way out so that this time the crisis is paid for by the capitalists and not the poor people.”