Covid-19 and the World “After”: When the Exception Becomes the Norm

As Covid-19 rages, the capitalists are increasing exploitation. But what about after the pandemic? The challenge for the working class is to reject the bourgeoisie’s “new normal” — and instead transform today’s uprising into a fight for a new social order. 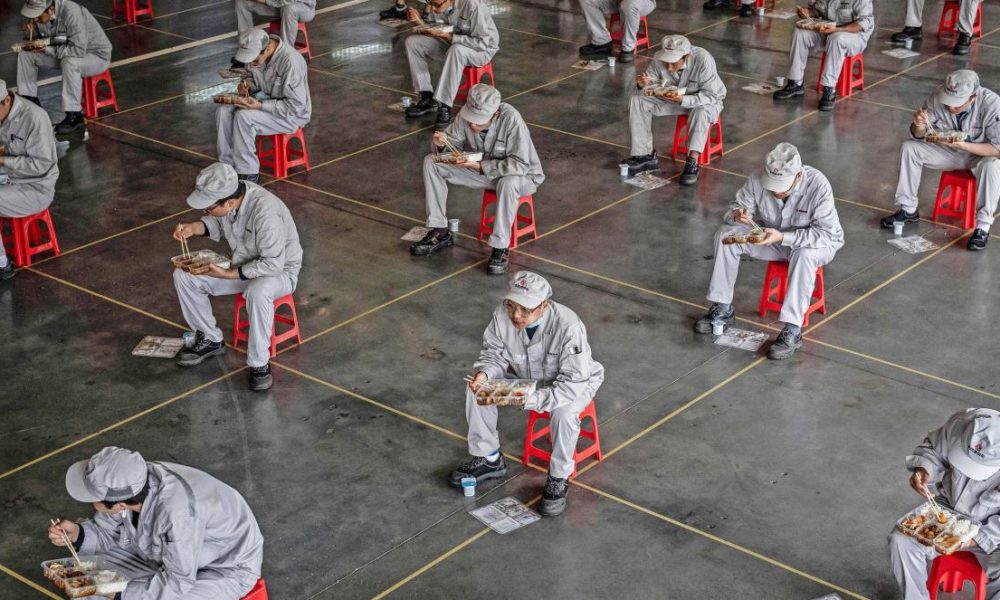 “We are at war.” That is how French president Emmanuel Macron described the situation in France two months ago, in the face of the coronavirus epidemic. The comparison with a state of war surprised many people. In this case, the enemy is invisible. It is in us and in others. It is everywhere and it is nowhere at the same time. To call it war is also to define the present as an exceptional period, to declare a certain regime necessary and inevitable if we want to defeat the disease. But periods of war are not simple interludes. Most often, they are transformative periods with long-term effects. Be it the economy, labor law, population management, or the relationship between the dominant and the dominated, the consequences of the health crisis will continue to be felt for years to come.

Past epidemics have permanently disrupted the relationship between exploiters and the exploited. In the 14th century, the Black Plague decimated 30 to 40 percent of the European population. The rich suddenly faced a labor shortage. Crops were in danger of rotting and livestock dying. Once scarce, land became abundant. The threat of being evicted from the land no longer had any effect on the peasants. They simply migrated to other lands, or to the cities, away from the lordship. Farmhands could demand wages that were sometimes twice as high as usual. Recounting this story in Caliban and the Witch, Silvia Federici writes, “For a broad section of the western European peasantry, and for urban workers, the 15th century was a period of unprecedented power.”1

The European ruling classes in the 14th century did not stand idly by in the face of the newly acquired power of peasants, farmhands, and workers. They did everything they could to ensure that the balance of power tilted back in their favor. Various countries saw an expansion of laws aimed at putting the laboring classes to work in a more or less forced manner by outlawing vagrancy and “idleness” and by establishing a maximum wage. In England, the 1349 Ordinance of Labourers required that everyone under age 60 must work for a lord. King Edward III’s ordinance justified it as follows: “Because a great part of the people, and especially of workmen and servants, late died of the pestilence, many seeing the necessity of masters, and great scarcity of servants, will not serve unless they may receive excessive wages, and some rather willing to beg in idleness, than by labor to get their living.” In France, the 1351 ordinance of Jean II le Bon also targeted the “idle” and the workers who refused to “do any work unless they were paid at their will.”2 These attempts to bring the working classes under control met with resistance from the exploited and opened a period of intense class struggle. Several uprisings broke out in Europe at the end of the 14th century, one of the best known being the Revolt of the Ciompi in Florence.3

The effects of epidemics on the balance of power between exploiters and exploited are difficult to predict. Covid-19 is less deadly than the Black Plague. Today, it is more difficult to leave one’s job to migrate to another region. Yet the Covid-19 epidemic has shown the centrality of wage labor and just how essential workers are, especially in “face-to-face” activities — not only nurses and doctors, but also food industry workers, including supermarket cashiers, truckers, and so on. Some sectors of the logistics chain have seen a surge in activity during the quarantine. For the largest logistics companies, the outbreak became a profit-making opportunity. In the United States, Amazon hired 175,000 employees in just two months. For employees in the logistics sector, which had been partly converted to deliver sanitary equipment, it was an opportunity to show their importance. Amazon workers went on strike in the United States on May 1, alongside workers at other so-called essential companies. Even if the definition of what is an “essential” sector has been debated during the quarantine, some sectors are mobilizing for recognition of their “war effort.” Strikes for better health conditions during the recovery period have been accompanied by strikes for wage increases and “coronavirus bonuses.”

Some future changes may have already manifested themselves during quarantine. Millions of employees were forced to work at home for about two months. While teleworking is nothing new, the magnitude it has taken on is new. It is estimated that 25 to 30 percent of employees in France have worked remotely. What has been new for many (such as teachers) is for others the generalization of the “flex office”; the workplace as such no longer exists, and workers are like nomads. In the postcoronavirus world, employees will work at home, in a café, or in one of the new coworking spaces. That is likely to promote the expectation that employees are available at any time, day or night, weekdays and weekends — to the detriment of their personal lives.

This could be a godsend for companies. They can save the millions they would have to spend on building, buying, or maintaining offices. It also represents a potential source of savings for the state. In the United States alone, more than 100 universities have switched to distance learning, which many of them plan to maintain for some courses in the fall 2020 semester. A law in France proposed on May 19 would “introduce digital distance learning in high schools, colleges, and elementary schools.” The aim of the bill is to make e-learning massively widespread, which would make it possible to reduce the number of teachers and even privatize some teaching by subcontracting it to digital EdTech companies. This is timely in a context of budgetary restrictions in state education and higher education. Indeed, in the United Kingdom, where higher education has been undergoing privatization for several years (growth in public-private partnerships, increase in university fees, etc.), e-learning companies have already openly begun to covet the distance education market. They already represent a $3 billion market that is expected to reach $7.7 billion by 2025, thanks to the boost given by Covid-19.

It is also worth mentioning the changes introduced in France through the State of Public Health Emergency law enacted on March 24 and recently extended until July 11. It gives companies immense leeway to reorganize work. They can more easily resort to teleworking and simply impose the banking of paid holidays or reduce daily work hours. In the so-called essential sectors, they can impose 60-hour workweeks, reduce the legally mandated rest periods, and so on. While these changes are “provisional,” they reveal that companies might try to negotiate them into collective-bargaining agreements under the pretext of avoiding closures or layoffs.

But this manipulation of the health crisis as a way to reorganize production and increase the exploitation of workers is only part of the overall picture. There are also some positive aspects — for example, the new awareness of what is essential and nonessential work. With respect to capitalist norms, what is useful and what is unnecessary to produce is being exposed. This can be a fulcrum for rebuilding class solidarity. What’s more, it is the capitalists themselves who have been forced to recognize the importance of so-called essential workers. There have also been new forms of solidarity, and even self-organization, as in the case of the McDonald’s in Marseilles taken over by its employees in the midst of the pandemic in order to feed the working-class neighborhoods. This gives an idea of what reorganizing production to meet social needs would look like. Similarly, the crisis in the hospital sector may make it a dynamic one for mobilizations in the weeks and months to come. All this will make it difficult to return to “normal.” The health crisis and containment have had the double effect of unveiling what truly makes society run (typically, invisible work) and putting a halt to social struggles. There has been a realization that the capitalists will put their profits before the lives of a large segment of workers when there are not widespread mobilizations.

Finally, perhaps the most encouraging aspect of the world “after” is the revolt of the U.S. working class against racism and police violence. While this movement has no specific connection to the Covid-19 pandemic, it cannot be understood without taking into account the context in which it is taking place. The drastic increase in unemployment in a country where unemployment insurance barely exists, and the fact that it is workers from racial minorities who have been on the front lines against the disease and that it is they who have been most affected by it, cannot be separated from the social anger that is shaking the country. The historic protests have had an impact around the world. We have seen massive rallies in dozens of countries, including France, where police violence was also unleashed during the lockdown.

The “world after” the bourgeoisie promises us is a degradation of the prepandemic world: more exploitation, more precariousness, more surveillance and control, more violence against racial minorities, and so on. But we cannot reject this “world after” with a demand to return to the past. Today, U.S. demonstrators are leading the way. We must take up last winter’s slogan from the demonstrators in Santiago, Chile: “We don’t want a return to normalcy. Normalcy was the problem.”

First published on June 7 in French in Révolution Permanente Dimanche.