Crisis in Colombia: “No” Vote Shuts Down Peace Accord

The rejection of the agreement between the Santos government and the FARC has led to a serious crisis and an unpredictable political scenario. 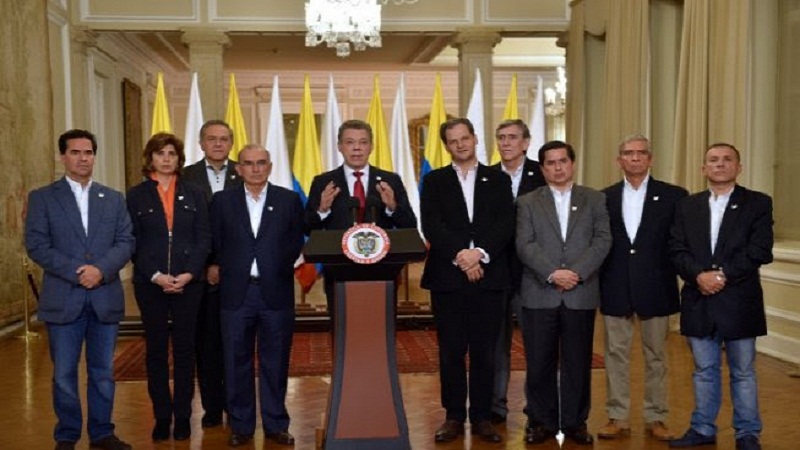 This article was originally published in Spanish in La izquierda Diario, October 4.
Adapted and Translated for Left Voice by Marisela Trevin.

Last Sunday, Colombians rejected the terms of the final agreement signed just days ago by Juan Manuel Santos’ government and the FARC leadership by a slim margin of 50.2 to 49.8, despite expectations that the referendum would pass with an overwhelming majority.The stark divisions expressed in the referendum reflect an enormous social and political polarization and growing discontent over increasing economic difficulties. Only 37 percent of those eligible cast a vote, in a country where turnout for presidential elections normally ranges from40 to 50 percent–further exposing the limits of this “democracy for the rich.” An overwhelming majority of voters in rural areas most affected by the armed conflict voted in favor of the peace accord, while a majority of urban residents voted against it.

The agreement between the Santos government and FARC leaders was several years in the making and would entail the rebel group’s 5,800 fighters and a similar number of urban militia members handing over their weapons to United Nations inspectors,beginning a process of full integration into Colombian political institutions.The deal included a limited agrarian reform and a commitment by the rebel forces to put an end to “any relationship that it may have established with drug trafficking on the basis of the rebellion.” It would have also allowed FARC leaders to avoid jail by confessing to killings, kidnappings, attacks and child recruitment. With this agreement, the government sought to put an end to an armed conflict that has claimed 220,000 lives and resulted in the displacement of over five million people over the past 51 years.

Colombia has traditionally been dominated by an elite sector of the industrial and landowning class; the FARC originally emerged in the 1960s in opposition to the oppression of the rural population by this elite. In the 70s, the mass dispossession of peasants under the Chicoral Pact of 1972 further strengthened the leadership of the guerrilla group in rural areas in the struggle against the ruling class, and the rebel group expanded significantly in the 1980s. Due to increasing rural poverty, many peasants were forced to resort to the production of illicit crops in order to survive and the FARC began to play an important role in the illicit economy. Over the years, guerrilla forces have confronted the State, its military, government-backed paramilitary organizations and drug trafficking cartels in a struggle in which it has often resorted to methods that are foreign to the needs and experiences of the working class and masses–sometimes even reactionary and inhumane, such as kidnappings, acts of retaliation against the civil population including massacres in rural areas, and others which have undermined the credibility of their proposed pacifist conversion. However, while great emphasis in mainstream media is placed on the violent actions of the guerrilla group, little is said of the fundamental role and responsibility of the State and its paramilitary forces in the emergence and persistence of this violence.

In part, the defeat of the agreement in the referendum was a product of Santos’ own making, after sowing hatred among locals toward the guerrilla force, blaming them for the fallout from over half a century of violence, effectively siding with the most conservative right. The Sunday upset was a heavy blow for Santos, who had turned the negotiation process into a central key in his political agenda. Burdened by the weight of persistent economic decline and growing unpopularity, he planned to use the referendum not only to legitimize the agreement, but also to revalidate his policies and score a major victory against his main political rival, former president Uribe.

Both Uribe and Santos share the main objective of the peace dialogues, which is that of the Colombian ruling class: to achieve the “negotiated rendition” of the guerrilla force. However, they disagree on the terms to be imposed in the negotiations. While Santos favors a more moderate formula that is acceptable to the FARC leadership, Uribe, backed by a fiercely anticommunist sector of the industrial and landed ruling class, considers the concessions to the rebel force to be excessive, seeking a more conclusive victory over the FARC in the rendition process. He maintains that members of the guerrilla force should not be allowed to reenter society without facing punishment–logic that resonates with broad sectors of the population.

The results of the referendum signals a fortified position for Uribe, who led the “no” campaign and is now arbitrator in the renegotiation process. It also constitutes a political defeat for the FARC and sectors of the left that supported the agreement and accepted Santos’ referendum proposal.

“No” vote in context

The vote against the agreement may reflect greater conservative mobilization among the middle classes, especially in the cities and in regions that have traditionally voted for Uribe, such as Antioquía or Casanare, while the “yes” vote was supported by peasants and workers in rural areas more directly affected by the armed conflict.

The rejection of the agreement also reflects a right political turn that has been advancing throughoutLatin America, with the decline of progressive and nationalist projects in the region, the results of which include Mauricio Macri’s election in Argentina, the Temer-led institutional coup in Brazil, and the deepening crisis in Venezuela increasingly pushed by imperialism and the national right to impose a “post-Chavist” transition. Within this context, the defeat is also a setback for Obama, who hoped to include thepacification of Colombia in his legacy of foreign policy “achievements.”

In Colombia, neither the broad support of US imperialism and decisive sectors of the dominant class, nor the collaboration of progressive sectors (ie., the Alternative Democratic Pole), the reformist left (ie., the Colombian Communist Party, Patriotic March) or the leadership of unions and social movements were enough to prevent the agreement’s rejection.

In search of a new pact

The government admittedly possessed no “Plan B” for the referendum’s unexpected defeat, leading to a political maelstromim pacting the entire regime. After the results became known, both the government and the FARC issued conciliatory statements.

Santos confirmed that the bilateral cessation of hostilities will remain in force and that he will continue to “seek peace until the last minute” of his term. He called on all political forces to open dialogue, particularly those that promoted the “no” vote.

In turn, FARC leader Timoschenko reaffirmed that they will continue to strive for peace and only use the spoken word as a means of construction, stating, “The Colombian people who dream of peace can count on us. Peace will triumph.”

On Monday, the first contacts were made between Uribe’s people and the government in order to get the “peace process” back on track. The Embassy(i.e. US imperialism), the UN and friendly governments (starting with the European Union and Cuba, both mediators during the negotiations) will also participate.

Uribe, who has stated that he would like to “contribute to a great national pact,” has expressed his intention to achieve an amendment to the agreement including punishment for FARC leaders, including jail time and the prohibition to run for office, and the payment of reparation and reconstruction costs with the property and resources of the guerrilla group.

Within this framework, any renegotiation means a rightward shift from the terms originally agreed upon with the FARC, with the limitation or annulment of several of the guarantees of “transitional justice” or disarmament methods, reintegration into civil life and political participation as a legal party. The guerrilla commanders will be pressured to make more concessions in order to relaunch the agreement and they will have to convince their base to accept them. This is one of the main factors that will possibly complicate the resolution of the crisis.

Although Santos and Uribe’s political needs may appear to be contentious, the strategic objectives of the different sectors of the ruling class they represent ultimately converge. They both support a neoliberal agenda and the defense of the benefits accumulated by the industrial and landowning elite during decades of war at the expense of the people, which the final agreement did not actually threaten.

Plan Colombia, funded by the United States, contributed about $10 billion in financial and military aid over the past 15 years and was decisive in the strengthening of the Colombian State and the reinforcement of the Armed Forces that led to increased pressure on the guerrilla group. The country’s political and military leadership and imperialist forces have acknowledged that it is not possible to eradicate the FARC solely through military means, and that a political (i.e. negotiated) resolution is necessary. The war waged with generous imperialist aid created the conditions for the negotiation in Havana. Now, under the new name of “Peace Colombia,” that plan continues and will be expanded to $500 million in 2017, reflecting Colombia’s importance to Washington as one of its main economic, political and military agents in the region.

The key sectors of the bourgeoisie and imperialism supporting Santos’ plan believe that it is the best way to consolidate and legitimize the political regime though a “national reconciliation” that would close the gaping wounds caused by half a century of extreme social and political violence. They intend to do this while opening up territories under guerrilla control to national and foreign investors in mining, oil, livestock farming and agro-industries and, ultimately, to project Colombia as a regional player with greater influence in continental affairs.

Agreement at an impasse

A politically complex and unpredictable conjuncture has begun to unravel in Colombia, although the least likely scenario for now seems to be the recommencement of armed conflict. The coming days will likely hold significant new developments. They also signal the need to discuss the support from a significant section of the left for the “peace process” and referendum, and the alternatives for workers, peasants, afro-descendants and indigenous people of Colombia.