A statement from the CHTU’s General Membership Meeting on #BlackLivesMatter, #DefundThePolice, and #CancelRent. 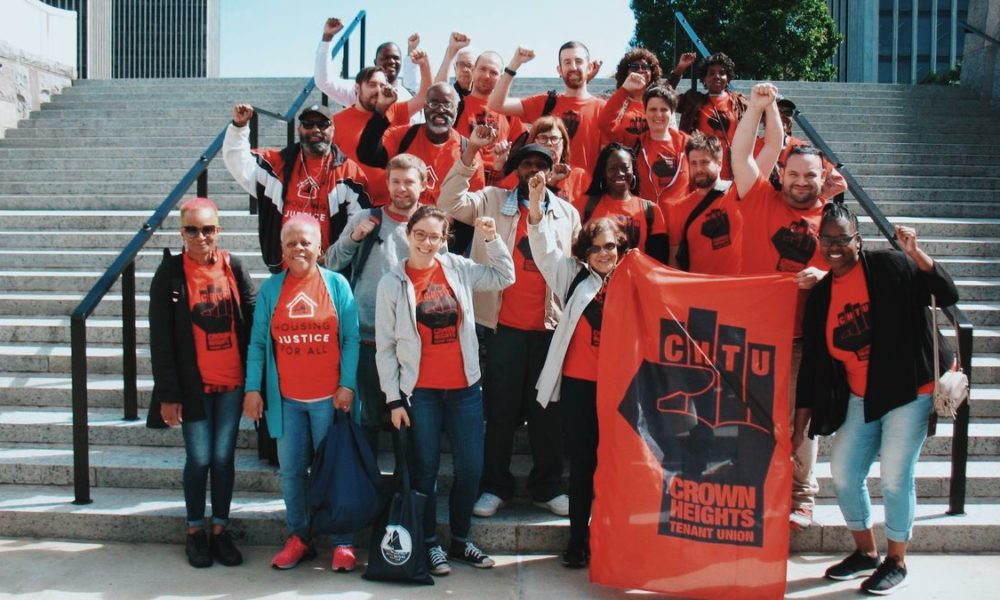 The Crown Heights Tenants Union (CHTU) began in 2013. Since then, they have made strides in educating tenants on their rights, organizing buildings, and pushing for stronger tenant protections. The CHTU has put out a statement against police brutality and in solidarity with the Black and Brown community

The real estate industry that exploits tenants has deep ties to the police force that brutalizes Black people. The police exist to protect private property, and landlords want their property protected so that they can continue to profit from taking advantage of tenants. The vicious cycle of overcharge and displacement that makes up gentrification is enforced by the police, from carrying out evictions to the surveillance and raiding of Black neighborhoods. In order to increase real estate values, Black tenants are pushed out of the neighborhoods they have lived in for generations. The major players of the real estate industry in NYC support the NYPD because police violence makes them more money. The recent curfew was enforced when private property was destroyed by protestors fighting for justice, and police were directed to protect that property rather than protecting the lives of the people they supposedly serve. In the middle of a pandemic, which has disproportionately impacted Black communities, the police are hurting us, not helping us.

Those in power tell us that the police keep us safe, but what they leave out is exactly WHO is kept safe. We know it’s not Black communities in Crown Heights. Just recently, the NYPD attacked tenants celebrating a graduation in the front yard of their building, barging inside and chasing people up the stairs and into their homes. Who does this serve? By criminalizing Black communities, the police enforce the power and violence of a real estate industry and government that values profits over people. We will not stand for this.

We can imagine a world in which the billions of dollars pumped into the NYPD are instead invested into our communities: housing, schools, healthcare, childcare, and more. We believe safe communities are communities with access to the resources they need to survive. If we focus on addressing the root causes of crime rather than taking a punitive approach to the outcomes, we can create a society rooted in justice. This city has the money to cancel rent during COVID-19, freeze rent afterwards, and invest in true affordable housing, but our elected officials are prioritizing funding violence against our communities instead. Public safety also means freedom from state violence.

The Crown Heights Tenant Union sees the fights to Cancel Rent and Defund the Police as deeply interconnected. Black communities who have been disproportionately impacted by COVID-19 and police brutality will also be disproportionately impacted by the eviction crisis. If NYC and NYS elected officials do not cancel rent, it will be clear that they do not value Black lives, despite whatever posturing they may do to articulate their support. The fact that the first housing protection put into place in New York was mortgage deferment for property owners shows the inherent racism in the system. It is no secret that the majority of property owners are white. These policies aren’t legislated in a vacuum. They are put into place by a system that intentionally values and protects white people and property over Black and brown lives.

Not canceling rent means adding insult to injury for Black communities who are already suffering under multiple interlocking systems of oppression. Virtue signaling means nothing without tangible legislative action. Universal rent cancellation protects everyone and indicates politicians’ commitment to equality for all which is what the Black Lives Matter movement is fighting for. We call on our elected officials to cancel rent and defund the police NOW. The health, safety, and prosperity of our communities depend on it.

Since the pandemic,  the CHTU has been fighting for rent cancellation and a permanent eviction moratorium. In a neighborhood that has been rapidly gentrifying, Black and Brown residents have been hit disproportionately hard by the economic fallout. Without rent relief, evictions are set to begin again soon and the results will be devastating for the community. The CHTU has planned two direct actions this week that will mobilize tenants to fight against the racist housing policies of New York City.

On July 5th, members of the Crown Heights community will be meeting at 5:30pm outside of 1507 St. John’s Place to celebrate an ongoing rent strike taking place. From there, the organizers plan to march to two more buildings from the union that are confronting their landlords and the capitalist state at large by withholding rent. Banners will be dropped in celebration and a march will follow.

On July 7th, the CHTU will join other tenants associations and housing justice organizations to protest in front of the Housing Court in Brooklyn. The action is intended to disrupt the Court and prevent the violence of evictions during a global pandemic, affecting the Black and Brown community the most. During the day, there will be singing, chanting, and speeches from tenants in the neighborhood speaking out against  the racist structural violence of New York City’s housing policies.

Brooklyn residents, join the struggle against greedy landlords and take the streets!

General Meetings for the Crown Heights Tenants Union are at 6pm every Thursday. If you are a resident in the area, join through Zoom and fight for housing justice!