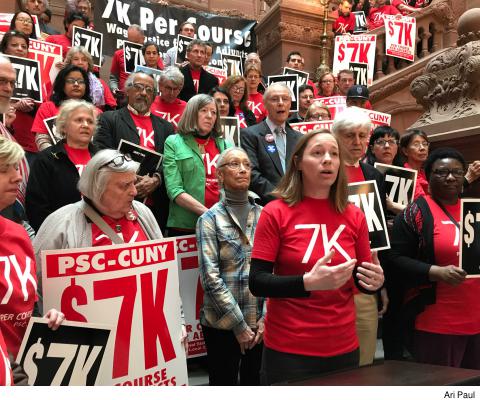 On Wednesday, October 23, after almost two years of closed-door bargaining, the Executive Council of the CUNY Professional Staff Congress (which represents both staff and faculty at the university) finally agreed to a tentative contract proposal with management.

Hailed as “historic” and “transformational” by the union leadership and the University, both of which have already begun their victory laps in the local press, the agreement actually represents a massive compromise on the most pressing issue for many union members: equal pay for adjunct faculty.

While the rank and file have been demanding that adjunct wages be doubled to $7,000 per three credit course (an amount that would put them close to parity with full-time lecturers), this proposed contract comes nowhere near that amount and demonstrates once again the failure of the bureaucratic, top-down lobbying strategy that the New Caucus leadership have been pursuing since they were elected in 1999.

According to the proposal, adjuncts would have to work an additional required office hour for each three credit course they teach. In exchange, they would receive 15 additional hours of pay per semester, which would bring the lowest-paid adjuncts up to only about $4,400 per three credit course. While the union leadership claims this is work that adjuncts are already performing and not getting paid for, the facts are much less rose-tinted. Adjuncts will be required to hold weekly office hours even if they teach only one class (something they are not required to do now), and the proposal clearly states that up to six of these hours may be used each semester for whatever management wants.

In a glowing exposition of the contract proposal, the offices of the Chancellor put out a statement the very same day the proposal was released, in which the additional required hours were touted as a path to the professionalization of the adjunct faculty and a victory for students.

Adjunct lecturers, the article proclaimed would be able to “devote more time to working individually with students, as well as advising, holding office hours, and engaging in professional development and other activities that play a key role in students’ success.”

In other words, management is eagerly looking forward to tasking their more than 12,000 adjuncts with duties ranging from advising to professional development training and who knows what else.

These additional hours of work, many of which will have little to do with their required teaching duties, would be a burden on already overworked adjuncts and would place them under more administrative scrutiny, actually deprofessionalizing them further in the process.

While these additional wages could be seen as a wash, since they come with an equal amount of additional work, the contract does provide some actual economic relief for adjuncts, but not until 2022. In that year, adjunct rates will rise to more than $91 per paid contact hour, but all of the already existing salary steps will be eliminated. This means those adjuncts currently earning more than the minimum amount, those who have served the university for years and sometimes decades, will see much less of an increase in their wages, and for those on the top of the current pay scale, the raise will be almost unnoticeable.

This additional amount will bring the minimum wage for a three credit course up to $5,500, but that will also be the maximum amount an adjunct lecturer can earn. Furthermore, this rate is far below the wages that other unions have recently won for adjuncts at places like Fordham and Barnard, where adjuncts will be earning well over $8,000 per course by the time CUNY adjunct reach just $5,500. Worse, by 2022 this wage will be worth at least six or seven percent less in real dollars thanks to the expected rate of inflation and cost of living over the next three years.

And of course, this amount is far from the original demand that the union put forward for $7K minimum per three credit course, and nowhere near the doubling of adjunct wages across the steps that the rank and file $7K or Strike movement have been organizing around for almost three years.

And those activists are not happy.

Indeed rank and file members have been taking to social media to decry the “terrible contract” vowing to vote it down if it passes the Delegate Assembly (DA) and is sent out to the membership. Official responses to the proposed contract have also been swift.

CUNY Struggle, the rank and file caucus that launched the $7KOS movement, has issued a detailed and scathing indictment of the proposed changes to the contract that criticizes, among other things, the fact that even full time faculty will likely see their expected salaries lose value over the life of the proposed contract. This is largely because across the board wage increases are retroactive for only one of the two years members have been without a new contract and are not likely to even keep pace with inflation.

Meanwhile the $7KOS movement has put out its own statement, sent to more than 18,000 union members today, decrying the limits of the proposal, and has also published a short and accessible FAQ to share with members before the DA votes.

Both CUNY Struggle and $7KOS are also already organizing for a massive push for a NO Vote, and a Strike Authorization Campaign movement is already underway should the proposal pass the DA.

While the expectation among most activists is that it will pass the DA, many union members across the ranks are unhappy with the proposal, and there is hope that it can be defeated by the membership. But the New Caucus has already begun to promote the contract heavily, and defeating such an entrenched bureaucratic leadership will be difficult.

This fact only demonstrates the necessity for a strategy that can outflank the leadership of unions like the PSC by developing and organizing a radical rank and file, capable of building a truly democratic union that is unafraid to challenge the NYS Taylor Law and unafraid to go on strike, not only for parity demands like $7K for adjuncts, but also for the demands of the whole class. Just like Chicago Teachers, CUNY faculty can use their labor power to fight to improve the lives of their students as well as their own. A free, fully-funded and fully-democratic university, with well-paid faculty and staff is possible, but only if we fight and link our struggles with other unions across the city. As the TWU rank and file struggles to win its own contract demands, opportunities for radical work actions and solidarity across unions and across the city will only increase. And successfully defeating this contract could be one of the many steps necessary for rebuilding the power of labor in NYC.