CUNY Urban Education skyped with two Brazilian students: a college student who is currently occupying his university and a high school student who was part of the first wave of occupations a year ago. 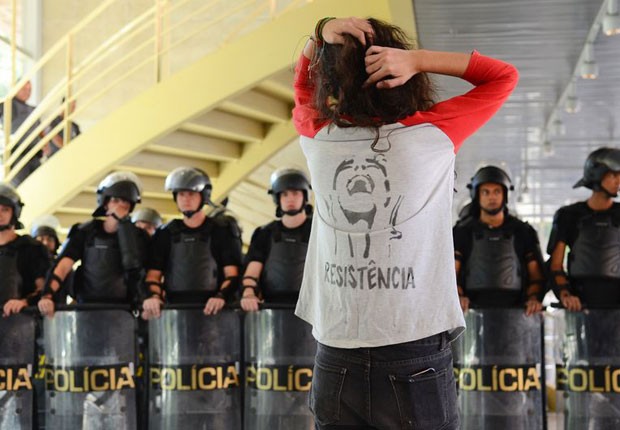 Around the world, youth are rising up to fight for equity and justice. In Hong Kong’s Umbrella Movement, hundreds of thousands of youth took the streets to demand Hong Kong’s independence. After Trump’s election, youth across the United States staged walkouts at their schools, demanding an end to hate and protesting the President-elect. In Brazil, after the right wing coup and onslaught of reactionary attacks, youth are currently occupying their schools to fight for education funding. However, the corporate media has painted these youth as troublemakers and entitled brats, interested in smoking weed in school rather than real change.

Recently, twenty- five New Yorkers participated in a Skype conversation with two Brazilian students: Julia Silva from a high school in the city of Campinas, Sao Paulo and Guilherme Kranz from the Federal University of Minas Gerais. The event was hosted by the Urban Education program at The Graduate Center, City University of New York. Tatiana Cozzarelli, a Brazilian-American PhD student and Left Voice editor was the moderator of the conversation. Guilherme is currently occupying his university with his fellow classmates. Julia was part of an occupy movement in Sao Paulo last year- the first successful wave of occupations.

CUNY students and faculty members took steps to show solidarity after learning of Brazilian student occupations against austerity and budget cuts to healthcare and education. Over 120 faculty members along with current and prospective students in the program of Urban Education at the CUNY Graduate Center took a picture and made a video in support of the occupiers in Brazil. It was a powerful statement of solidarity between the two groups of students. Many educators at CUNY saw clear connections between the cuts to education in the US and the cuts in Brazil, articulating a need for global solidarity and radicalized movements in the US. The CUNY community has continued to engage with Brazilian students currently occupying their schools, using a Skype conversation to learn about their experiences and share ideas in real time. It is an important step for CUNY students and faculty members to take, considering the political climate of the US and Brazil and the advance of the right wing in the elections.

Guilherme and his classmates are approaching the four week mark of occupation. They are fighting against the measures imposed by the new government, brought to power by a right wing coup, who is attempting to push through a plethora of cuts and austerity measures, including a 20 year freeze on education funding. Guilherme told the audience that students cannot defeat these cuts alone. He remarked, “we need to create an alliance with the working class to defeat the cuts and ultimately, Temer’s coup government (new government in Brazil). ”

Julia shared the same sentiment as Guilherme. She said, “The economic crisis is strong, but we are stronger when united with the working class. Only the struggle can change our lives.” Julia was part of the occupying movement a year before, which was protesting school closings. The occupations spread to 200 other schools, a feat accomplished by occupying students who taught youth in other schools the potent tactic of occupation. The high school students won; the governor did not close down the schools and the state secretary of education was forced to resign. In exchanges with CUNY students and faculty, Julia emphasized that the movement wouldn’t have been a success if it weren’t for the support of the community who brought food and support to the occupations.

What did we learn from the conversation with the Brazilian students who are occupying their schools? The first and most important is the need to unify movements with the strength of the working class to enable the to fight against cuts in education and assault against marginalized individuals.

This lesson in very important for us in the United States, as we begin to organize a movement against Trump. The walk out movement of high school and university students protesting Trump and his attack on minorities must unify with the working class in order to be successful.

This means organizing walkouts called by students as well as teacher unions and the coordination of work stoppages to create sanctuary cities. The Skype conversation between Guilherme and Julia with CUNY students proved both productive and beneficial, sparking reflections on the true meaning of unity and solidarity.