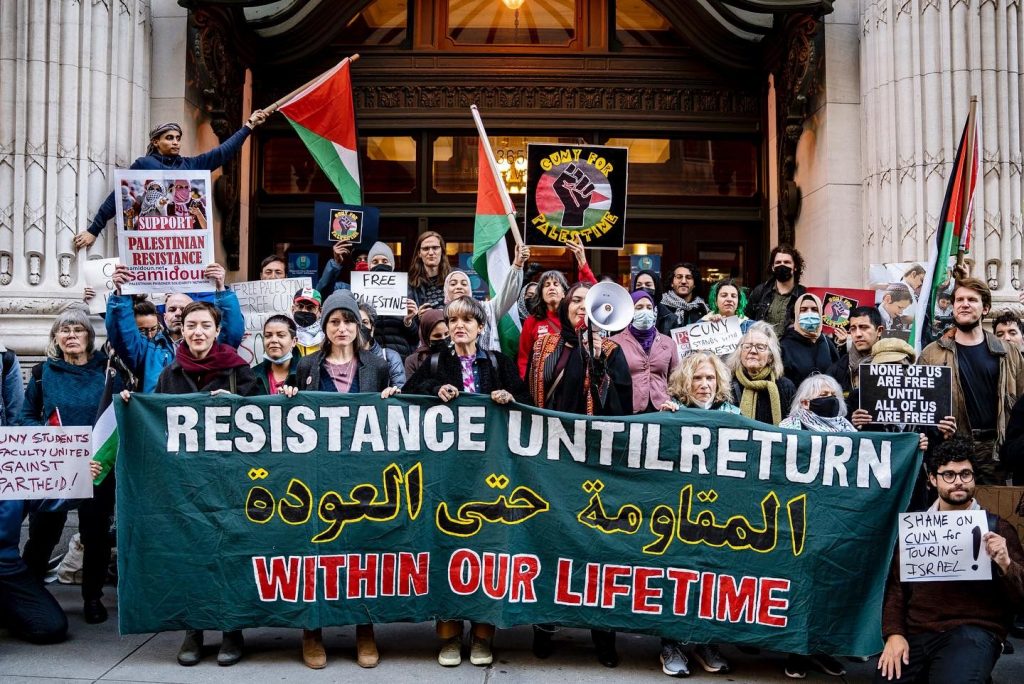 Earlier this week, CUNY’s Chancellor, Félix Matos Rodríguez, flew to Israel with nine other CUNY executives on a trip organized by the Jewish Community Relations Board of New York. Called the “Scholars Building Bridges” visit, the administrators will be visiting several Israeli universities. The official statement from the Chancellor whitewashes Israel’s oppression of the Palestinian people and the Israeli academy’s role in that oppression, referring to the “complexities of Israel’s higher education system” and the “the challenges of working to find common ground in a climate of complex political and religious significance.”

After the news broke, student, faculty, and staff activists came together in an emergency protest on Friday evening in front of the CUNY Graduate Center.

The Cross CUNY Working Group Against Racism and Colonialism protests this normalization of CUNY ties with Israel (“Building Bridges”) that ignores the well-documented human rights abuses that underpin Israel’s apartheid and colonial rule as well as the extensive organizing of CUNY students and workers in solidarity with the Palestinian people. We believe that the framing of this trip – as an attempt to “build bridges” – is an effort to whitewash Israeli’s crimes and legitimize engagement, while sidestepping the enormous imbalance of power and the ongoing violence of the Israeli state. Adding insult to injury, the trip takes place during Eid, which Palestinians are once again forced to celebrate under occupation, and following multiple Zionist attacks on Al-Aqsa, dozens of Palestinians killed, and hundreds injured and jailed in just the last few weeks alone.

The Cross-CUNY Working Group Against Racism and Colonialism joins Within Our Lifetime; the Students for Justice in Palestine (SJP) chapters at CUNY Law, Brooklyn College, City College, John Jay College, and College of Staten Island; Palestine Solidarity Alliance of Hunter College; CUNY for Palestine; and Rank and File Action (RAFA) in denouncing this trip.

Please also sign the new “CUNY Community Statement: Support Our Palestinian Colleagues, Reject Israeli Measures Against Academic Freedom.” In May, Israel will begin to implement a far more repressive policy that specifically targets Palestinian universities by giving the Israeli military the absolute power to determine which internationals may study or teach there. Allies are asked to sign onto this and similar letters (see MESA and Birzeit University, for example).

Over 100 people turned out for the protest, calling for “no bridges with the apartheid state.”

The sign in the above image that reads “Resolved: PSC-CUNY condemns the massacre of Palestinians by the Israeli state, June 10, 2021” refers to a resolution passed last summer by the faculty and staff union’s delegate assembly, alongside student mobilizations and a related resolution passed by the CUNY Student Senate.

With the close ties between the United States government and the Israeli states, and the role of the academy in facilitating and normalizing these ties, it’s more important than ever for workers and students to mobilize for the liberation of the Palestinian people.