Since right wing political parties gained control of the Brazilian government, they have continued and worsened the cuts to healthcare and education. The right wing government proposed PEC 241, which includes a spending freeze on education for the next 20 years. In addition, MP 746 effectively cuts classes in philosophy, sociology, art, physical education and foreign languages in high schools. As a result, thousands of high school and university students are taking the streets and occupying schools to protest these measures.

In New York City last Tuesday, over 120 faculty members and current and prospective students at the program of Urban Education in the City University of New York Graduate Center took a picture and made a video to show solidarity with the students in Brazil. I was one of those students.

Brazil is not alone. The United States has been cutting education spending for years. A decade ago in Philadelphia, government officials began the process of privatizing its schools. I was one of the thousands of students, parents, community members, and teachers who took to the streets to protest the privatization of the Philadelphia School District.

Cuts in education spending have only accelerated since then. In 2014, the president of my alma mater Central High School called for parents and volunteers to come in to man the library and assist students with college applications because it had lost 12 teachers and five counselors. It got to the point that the parents were paying for paper that the school couldn’t afford. Some math and science classes had 50 to 70 students.

As a result of the cuts to education spending in Philadelphia, poor and minority students suffer the most. What happened in Philadelphia and what’s happening in Brazil is an attack on the working class and marginalized communities. Twelve years ago, I marched on the streets to protest the privatization of Philadelphia’s schools. Last week, I took a picture with my classmates to show solidarity with students in Brazil because I see the budget cut in education as an act of violence against working-class families.

At the CUNY Graduate Center students in the Urban Education program have many reasons to show support. Anna, a PhD student remarks, “In the time when activism is rare, it is incredibly inspiring to see students in Brazil take matters in their own hands. For many citizens in the US, skepticism has replaced activism. Disappointment with the economic system and the politics in our society seems to have made us refuse to participate in democracy in a way that we should. But when we see the embodiment of such agency in young minds, as in high schoolers in Brazil, it gives us hope and inspires us to exercise our own agency as well. It certainly inspired me!” 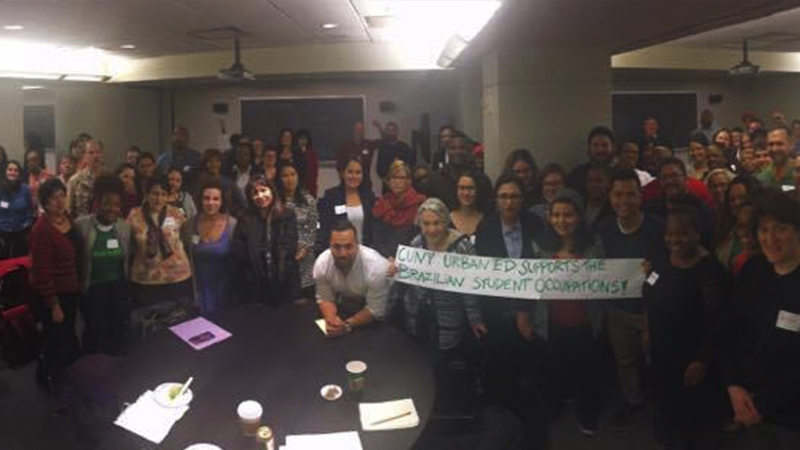 PhD student Dora shares the same sentiment: “As a Latina and educator in an urban community college with a student body that comes mostly from marginalized groups, I can understand how unjust policies driven by the greed of politicians can have devastating consequences to those we are supposed to protect and educate. Our first duty as educators is to the students. Brasil’s students are showing the rest of the world that justice must be taken, not expected. This is an example of social justice-as-action.”

CUNY professor Dr. Anthony Picciano sums up the support of CUNY students and faculty members: “While much of what we study in our PhD Program in Urban Education focuses on issues related to America’s cities, we should never forget that what we do has ramifications for people all over the world. Our photo on Tuesday is an expression of our solidarity with the people in Brazil.”

Khanh Le is currently a PhD in Urban Education student at the Graduate Center, CUNY. His interest lies in looking at language from a critical perspective and its role in promoting equity in marginalized communities, especially Vietnamese refugee youth.