CUNY Students Turn Out in Support of Palestine

On Friday, May 28, students and allies demonstrated at John Jay College of Criminal Justice in solidarity with Palestine. This is just the latest manifestation of growing support for the Palestinian cause that has seen many rallies in NYC throughout the month. 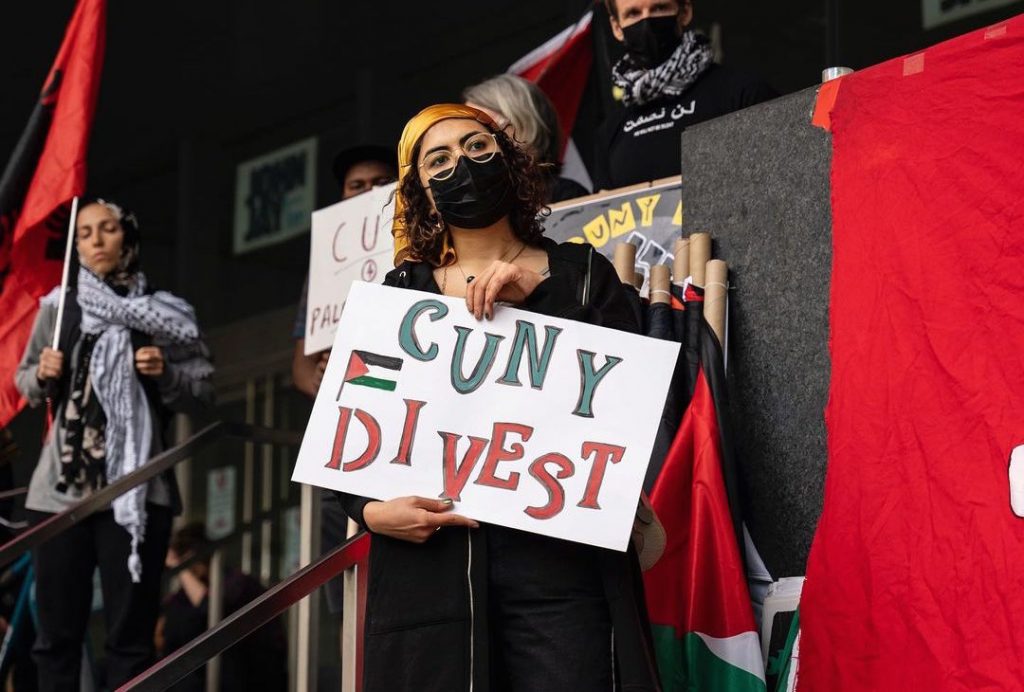 Students and allies gathered in front of the John Jay College of Criminal Justice on Friday afternoon to denounce their school’s relationship with the Israel Defense Force (IDF) and demand that both John Jay and the whole City University of New York (CUNY) system cut all ties with Israel.

More than 600 students, faculty, and allies of the John Jay College of Criminal Justice have signed onto a statement written by a coalition of students calling for solidarity with Palestine, and for the school to join the Boycott, Divestment, Sanctions (BDS) movement. Hundreds more have signed a similar statement at Hunter College and another letter that encompasses all 25 campuses of the City University of New York (CUNY).

John Jay is particularly complicit because its focus on law enforcement-related majors entails significant collaboration with the NYPD and the IDF. As one student speaker who had majored in international justice pointed out, some faculty are former members of the IDF or have trained with them, and many law enforcement techniques taught in John Jay’s classes have been imported from Israel, where they were first tested on Palestinians.

Another student criticized Karol Mason, the president of the university, for empty rhetoric around support for Muslim students. “Don’t send us an email about Islamophobia,” the student said, “Don’t tell us to go to the Wellness Center. We will not be well until Palestine is free.”

In addition to the students from John Jay, other speakers included students from Hunter College, City College, the College of Staten Island, and the CUNY School of Law, a John Jay faculty member, and representatives from multiple Jewish student groups.

“Our safety will never come through ethnic cleansing,” said the president of CUNY’s Jewish Law Students Association, “It will never come through apartheid…Israeli oppression isn’t Jewish, and Judaism rejects it.” A speaker from City College shared stories of several recent instances of discrimination against Palestinian students, which the university had refused to address, and another John Jay student spoke about the relationship between the oppression of Palestinians and the oppression of Black people in the United States.

While many individual faculty and staff members were present at the rally, the faculty and staff union was notably absent. In fact, the Professional Staff Congress (PSC) has made no statement about Israel/Palestine at all — a sharp contrast to other unions, such as the United Teachers of Los Angeles, who passed a resolution calling for an end to all U.S. aid to Israel. Just as it is important for unions to explicitly and militantly support Black Lives Matter, the labor movement must also take concrete actions to support fellow workers in Palestine. For workers in the education sector, it is also a matter of supporting the students and their families. “CUNY tells me I should feel accepted,” said one student, “But how can I feel accepted at a university that funds the oppression of my people?”