CUNY Union Calls to Kick Cops out of the AFL-CIO

On Thursday, the PSC CUNY joined the chorus of unions calling to kick cops out of the labor movement. 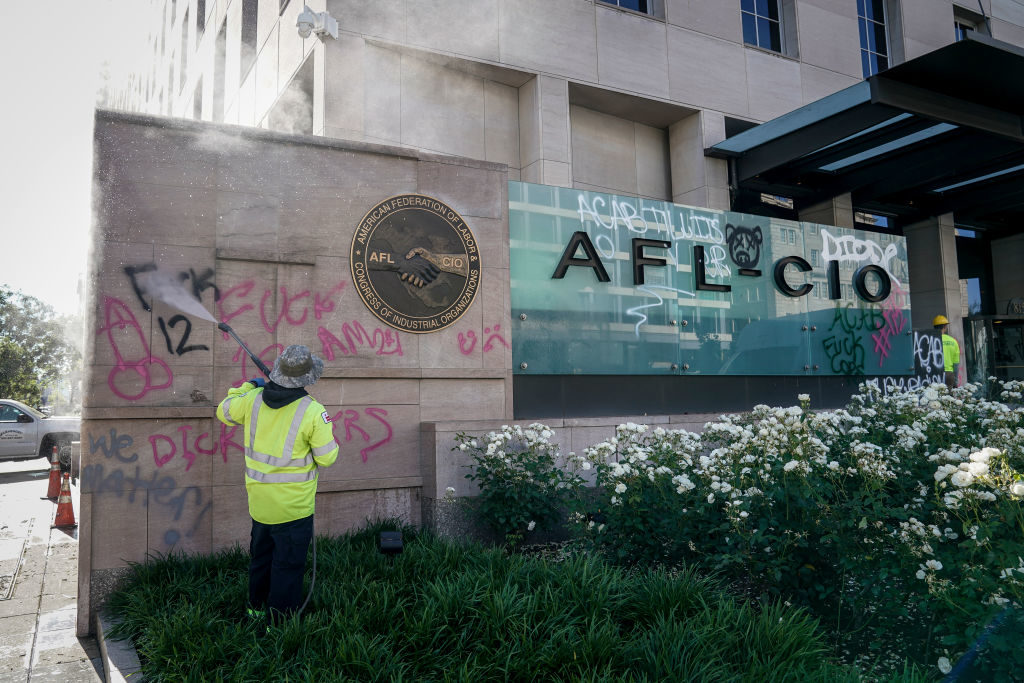 On Thursday, June 25, the Delegate Assembly of the Professional Staff Congress (PSC) union, which represents more than 25,000 faculty and staff at the City University of New York (CUNY), overwhelmingly passed a resolution demanding that the AFL-CIO “end its affiliation with the International Union of Police Associations” (IUPA). This decision comes less than a month after the murder of George Floyd by Minneapolis Police, and after several weeks of violent nationwide police repression of the protests that followed.

Although the head of the AFL-CIO, Richard Trumka has publicly declared his support for police unions, many AFL-CIO affiliates disagree, and the PSC resolution is just one voice in a growing chorus of labor unions, affiliates, and worker organizations that are calling for police union accountability and disaffiliation.

Earlier this month, June 9, the Executive Council of the Writers Guild of America East (WGAE) passed a similar resolution, arguing that police unions are incompatible with the AFL-CIO’s stated goals to “vanquish oppression, privation and cruelty in all their forms.”  On June 17, Workers United in Upstate New York, a union that represents more than 9,000 workers, also called for the AFL-CIO to disaffiliate with the IUPA because, as they argued, “conflating our mission with that of police unions undermines our solidarity.” On June 19, the Kings County Labor Council voted to kick out 1,300 members of the Seattle Police Officers Guild (SPOG) after they failed to acknowledge and address the racism within their ranks.

Meanwhile, several other unions and worker organizations  across the country have called for greater accountability for police unions. One such union, the 50,000 member Association of Flight Attendants (AFA-CWA) has demanded that police unions enact policies to directly address racism and to hold violent officers accountable for their actions “or be removed from the labor movement.”

In addition to the demand to expel the IUPA from the AFL-CIO, the PSC resolution also called on NYC Mayor Bill de Blasio to defund the NYPD by at least $1 billion and invest those funds in public health, housing, and education. While the resolution did not call to kick cops out of CUNY or to eliminate the CUNY Public Safety Department, it did demand that the university revisit its 1992 memorandum of agreement with the NYPD and that it no longer permit NYPD officers on CUNY campuses in non-emergency situations.

While some PSC delegates argued that police have a right to unionize and claimed that unionization actually helps to keep police officers in check, ultimately only 10 delegates voted against the resolution which passed 113 to 10. This vote, which would have been unthinkable five weeks ago, shows that the movement is radically changing the way that people think about the role of the police. It also shows that working people are quickly realizing and embracing the fact that the police are not workers, that repression is not a job, and that cops have no place in the labor movement.

This resolution and the many others that have passed across the country are a welcome development in the ongoing struggle against police violence, but resolutions are always only as good as the organizations that pass them. This is why the rank and file of the PSC CUNY and other unions that have approved similar resolutions must be vigilant about forcing their leaderships and their affiliate representatives to follow through and take these demands all the way to the AFL CIO convention if need be. Kicking the police out of the labor movement is important, but it is also important that unions and their members actively commit themselves to taking mass action, including strikes when needed, to defund the police and resist police violence.

Below we reprint the PSC CUNY resolution in full:

Resolution: The Professional Staff Congress Calls for Defunding the NYPD and Redirecting Resources to Education, Public Health and Other Community Needs

Whereas, the brutal murder of George Floyd is an egregious instance of racist policing that has claimed numerous Black and Brown lives;

Whereas ​ the vast majority of CUNY students belong to poor communities long targeted by the NYPD;

Whereas, studies have shown that police reforms and training programs aimed at reducing abuses have not altered the consequences of systemic racism in policing;

Whereas, governments typically spend far more on policing than on public health, homeless services, youth services and other vital agencies;

Whereas, ​106 organizations, including unions such as locals of UAW and 1199SEIU, National Domestic Workers Alliance, and New York Taxi Workers Alliance have publicly urged Mayor de Blasio and the City Council to defund the NYPD;

Whereas, in response to the mass protests in New York city and across the country following the police killing of George Floyd, Mayor deBlasio has announced a shift in funding from the NYPD to youth and social services, a series of police reforms, including moving the enforcement for street vending out of the NYPD to a civilian agency, and adding community ambassadors to the NYPD to serve as liaisons between officers and New Yorkers;

Whereas, while we welcome Mayor deBlasio’s announcement, the proposed cut are only a signal towards a required shift in priorities and must be followed by action and transparency;

Whereas, with the devastation the city has suffered from COVID-19, there is an urgent need to reduce NYPD funding and reallocate the resources in the areas of public health, housing, education, and community needs;

Whereas, the City is better served by a smaller and more transparent and accountable NYPD; therefore be it

Resolved ​ that the PSC calls on Mayor de Blasio and the City Council to defund the NYPD by reducing the NYPD budget by at least one billion dollars and reallocating the funds to resources that have been proven to support poor communities of color like public health, housing, education and youth employment programs;

Resolved ​that the PSC demands transparency on how much funding the city will cut from the NYPD’s $6 billion annual budget;

Resolved that the PSC calls on Mayor de Blasio and the City Council to make the redirection of NYPD funds a first step in reimagining public safety in New York City and re-creating systems of public safety that would keep all New Yorkers safe;

Resolved ​ that the PSC will bring this resolution to its affiliate bodies, including the Central Labor Council;

Resolved that the PSC calls on the AFL-CIO to end its affiliation with the International Union of Police Associations and that our representatives to the AFL-CIO will initiate the proper procedures for such a discussion in the AFL-CIO as soon as possible.

Approved by the PSC Delegate Assembly on 6/25/20