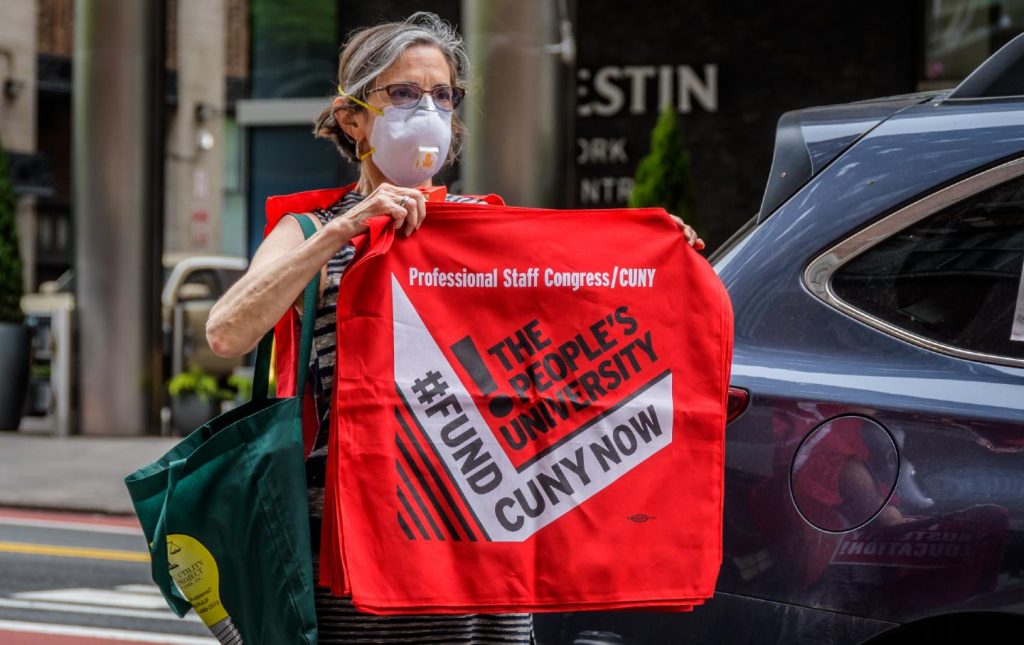 The time between semesters, especially the shorter winter break, is a time of anxiety and uncertainty for adjunct faculty, and this year’s holiday break has been especially catastrophic. Adjunct faculty across the City University of New York (CUNY) system are being laid off  because of a “70/30” mandate instituted by CUNY Central. This plan dictates that 70 percent of classes must be in person, regardless of the desires of students. Just like at the beginning of the pandemic, when thousands of adjuncts were laid off in the summer of 2020, thousands of adjuncts again face the possibility of losing classes they need to pay rent and maintain their eligibility for health insurance. This inflexible and dangerous reopening, despite reassurances from Chancellor Félix Matos Rodríguez and provosts across CUNY, is a plan fueled by a desire to return to campus no matter the costs.

Though the leadership of the CUNY faculty union, the Professional Staff Congress (PSC-CUNY), rebuked the 70/30 plan in December, citing gross mismanagement during the entire pandemic, that statement was released well after the registration period for Spring 2022 classes. By that time, the “one-size-fits-all” solution had already been put into place, backed by the ideological messages of now-mayor Eric Adams, whose rhetorical position on Covid since winning the election in November has been that “we are tired of being prisoners to Covid.” This shortsighted and harmful posture has sent disastrous ripples through New York’s public K-12 schools as well, where teacher burnout and student absences are creating a pandemic of learning loss all its own. Leading the fight against these layoffs are PSC rank-and-file members. Adjuncts, staff, students, and full-time faculty are organizing actions in the wake of the union leadership’s failure to do so, putting together a rally at CUNY’s central offices on Monday, January 24 and a #BrunchWithFelo event planned at the chancellor’s residence in Pelham on Saturday, January 29.

What is crucial to underscore again is that no adjuncts have to lose their jobs. This crisis is a choice — one made by administrators and carried out by a byzantine network of provosts and department chairs who, depending on the school, have differing degrees of flexibility to assign classes as they see fit. This is another in a litany of structural failures inherent to CUNY, and grist for the mill of administrators. Although the argument is that people want to return to campus and that students and faculty want to be back in classrooms, the reality is much different. Right now, enrollment at the CUNY community colleges are only 58 percent of what they were this same time last year, and data from CUNY’s own registration system show that students do not want to return to campuses. For example, in the English department at LaGuardia Community College, 100 percent of online classes are filled, while only 4 percent of in-person classes are. Other departments at other community colleges show the same pattern.

Since the beginning of the pandemic, when CUNY switched from in-person to online learning in about a week, adjuncts have had to fight for their jobs every semester. We’ve been asked to adapt our classes for online learning before we even know if we will be assigned a class, and have worked more hours teaching online between maintaining Blackboard sites (or equivalent online learning technology) and preparing and grading extra material for students to complete in asynchronous sessions. In those first weeks, there was a feeling of solidarity, that we were all pulling together to create spaces for students to learn in a world turned upside down. Not long after the Spring 2020 semester ended, thousands of adjuncts were laid off, and the weak response from PSC-CUNY signaled to management that adjunct jobs were expendable. What we see now is the fallout from that failure: the administrators do not fear action from PSC-CUNY because of a pattern of weak responses from the union leadership.

This fresh wave of adjunct exploitation is nothing new; the neoliberal adjunctification of universities in general, and at CUNY in particular, has seen a steady stream of chancellors and provosts creating an at-will workforce to teach the same courses as the full-time faculty, but with much lower pay and negligible benefits. According to a report from American Federation of Teachers, “25 percent of adjunct faculty members rely on public assistance, and 40 percent struggle to cover basic household expenses.” At CUNY, beginning in August of this year, adjunct lecturers will be paid only $5,500 per course in accordance with the current contract — a contract the PSC-CUNY has touted as “the biggest gain in equity in the union’s history.” At other universities in New York City, adjuncts make as much as $7,000 per class (Fordham) and $9,000 (Barnard) per course.

It is well documented that adjuncts are underpaid, but what is rarely discussed is how we are overworked. More importantly, our passion for teaching and learning is used as a cudgel to force adjuncts to work more and strive to please department chairs. Adjuncts, an already atomized workforce by the very nature of the job, are pitted against each other, vying for precious courses that have become ever more rare due to course minimums that are dictated not by educators, but by administrators.

I have been an adjunct in the CUNY system for five-and-a-half years. During the majority of that time, I worked at the Borough of Manhattan Community College, where just last week a large number of adjuncts in the English department were unceremoniously laid off when the adjunct coordinator informed everyone, by email, that only adjuncts on three-year contracts would be given classes. Again, this didn’t have to happen, but it did — and it is just one more tragic event in a long history of adjunct exploitation before and during the Covid-19 pandemic.

I began as an adjunct because I love teaching, and I hoped it would be a path toward full-time employment in the college system where I did my undergrad work. But five years in, the only path forward to pay equity and the ultimate dismantling of the adjunct system is a total restructuring of the current model through the organization of rank-and-file university workers outside the service union model, fighting against the calcified bureaucracy inherent to such a union and against these layoffs and any future cuts to CUNY.