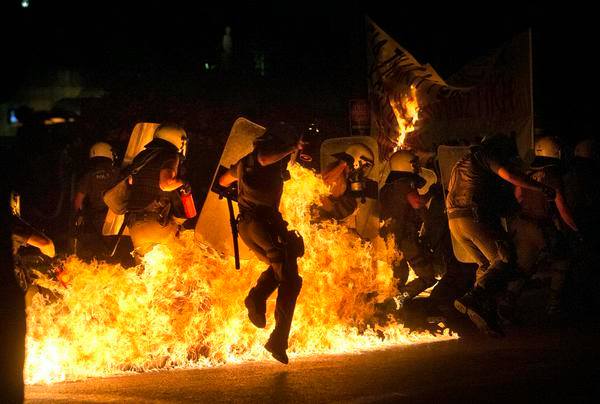 On Monday, the confederation called for a day-long strike against the new memorandum .

Syntagma Square, in Athens, was the scene of fierce protests on Wednesday. The police responded with repression and tear gas, and carried out arrests in order to quell the demonstrations taking place outside Parliament.

The leadership of the ADEDY union is composed of members of the anti-capitalist coalition Antarsya, the Syriza-allied union tendency META, and PAME, a union alliance organized by the Greek Communist Party (KKE). The union’s declaration to the government reminded Greek officials that only a few days after 62% of Greeks rejected the proposals of the creditors, Tsipras accepted similar conditions put forth by the Troika, as if the referendum had never happened. In this way, the Syriza government is acting similarly to the governments of New Democracy and the social-democratic PASOK, who faced 33 general strikes in recent years.

This is the first general strike carried out during the Syriza government, which is now facing numerous contradictions in order to justify this defeat as the lesser of two evils. In fact, it is a truly colonialist pact which includes pension reforms, and increase in taxes and social security contributions, and a privatizations program which will include numerous state assets, most notably among them, the Port of Pireo.

The opinions on the agreement and the day of action in opposition are diverse, ranging from enthusiasm that an alternative is possible, to resignation and fear that not accepting the Troika’s conditions would mean collapse and economic catastrophe.

The Greek people gave a resounding “NO” (OXI) to the agreement proposed by the Troika on July 5, but they also voted NO to austerity, to misery, and to blackmail by the international financial institutions. However, Syriza has only moderated its program since then in order to reach a deal with the Troika, a strategy that has ended in absolute failure and profound humiliation.

But the same day that Parliament prepares to approve this colonialist pact, workers have organized a general strike and the working class continues to mobilize in the streets against austerity.

A program is needed which includes the demands: no to the re-payment of the debt, the recovery of all privatized companies, the nationalization of the banks and strategic sectors of industry under worker control, heavy taxes on the rich and the state’s monopolization of foreign trade, among other measures. A program like this could be won through a prolonged period of protests, strikes, and direct actions which go beyond the bourgeois framework in which Syriza has attempted to operate, without success.

The tireless struggle of the working class and the oppressed people of Greece, with its advances and retreats is worthy of admiration from all of us. Its clarity and commitment contrasts with the moderation and capitulation of the great majority of its political representatives in government.

Their struggles during these five years of economic crisis, two financial bailouts, and draconian austerity measures which have left the country in a near-postwar situation, have given the Greek workers and youth the experience necessary to rely on their own strength as well as the courage to continue confronting the dictatorship of the markets.
It is of the utmost importance to unite their struggles and bring the Greek people to a true break from the Euro, the EU and austerity and toward a government of the workers which would serve as an example to the world.