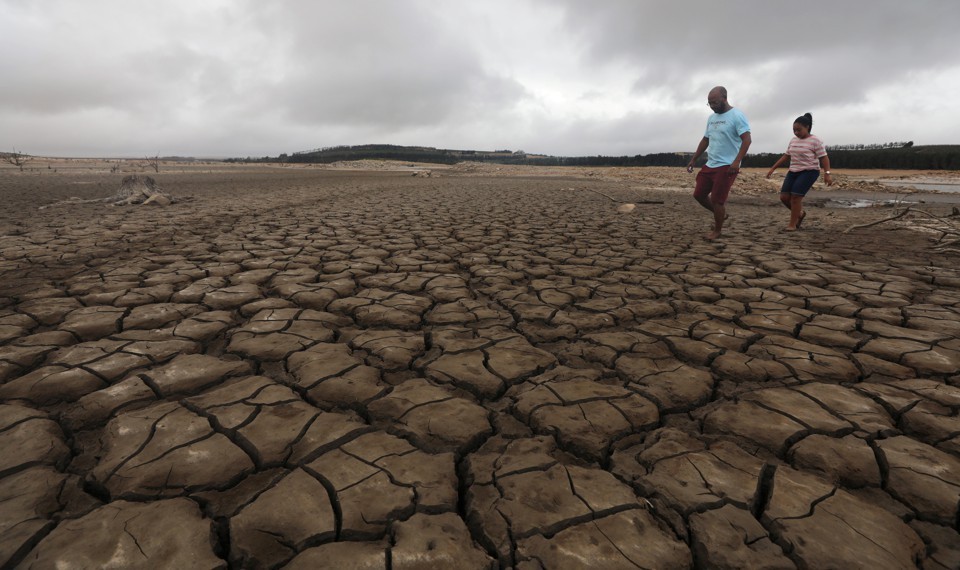 Image via The Atlantic

We no longer need to speculate about the possible effects of global warming. Its effects are being felt already by millions throughout the world. From increasingly powerful storms in the Caribbean to the deadly forest fires that ravaged the American West this past winter, the climate of the Anthropocene epoch has begun to unleash destruction in ways not witnessed in modern history.

Nowhere is this more apparent than Cape Town, South Africa’s second-largest city, with a population of around 4 million. The city is experiencing a water emergency so severe that that city managers have announced plans for a “Day Zero” in 2019, at which point all of the city’s private taps will be shut off.

What Happens When the Taps Run Dry?

A three-year drought has reduced the dams that supply water to the Western Cape to around 19 percent of their capacity and the water levels continue to fall fast. When the water resources reach 13 percent, officials will close the taps indefinitely.

Residents of Cape Town are currently limited to the use of 50 litres (13 gallons) of water per day in their homes, an amount the World Health Organization estimates is minimum for “basic hygiene and food preparation.” When Day Zero arrives, the limit will be reduced to 25 litres (6 ½ gallons) per day, which residents will have to receive at collection points in the city. For reference, a 90-second shower requires approximately 15 litres of water.

The head of the provincial government, Helen Zille, has already instructed Capetonians to “[t]urn off the tap of your toilet cistern…No-one should be showering more than twice a week at this stage. You need to save water as if your life depends on it because it does.” Queues have formed at natural springs and community collection sites in the city, where residents try to supplement their allotted amount of water.

Originally scheduled for April of this year, the date for Day Zero has now been postponed until next year because city officials say water conservation measures have alleviated the crisis somewhat. However, some have said that this postponement is not a result of any improvement in the situation but rather the fear of city officials that the water emergency would scare away tourists. Tourism supplied ZAR 402.2 billion ($27.3 billion) to the South African economy in 2016, representing over 9 percent of the country’s GDP.

But not even the most optimistic officials dare say that a Day Zero will be averted for long. Above average rainfalls would be required for three to four seasons consecutively in order to restore dams to sufficient levels.

The water emergency does not affect all Capetonians equally. The richest residents of the city, nearly all of whom are white, will find ways to avoid any severe hardship. As the New Yorker points out, Cape Town’s rich can store water in extra bedrooms ahead of the shutdown or hire others to stand in water collection queues for them. For around $6,000, rich families can even have a bore hole dug to tap into underground water reserves. Nor are the wealthiest residents in much danger of contracting disease or going hungry as a result of the crisis.

Meanwhile, many of the city’s poorest have not had sufficient and reliable access to clean water for decades. More than half of the residents of Cape Town live in the township of Khayelitsha, a sprawling shantytown settlement. In just the last ten years, the population of the township has spiked from 400,000 to 2.4 million. Nearly three-quarters of adults are jobless. Almost 90 percent of families in the township are “moderately to severely food insecure.” More than half of homes in Khayelitsha do not have a water connection and residents must walk to communal taps to collect all of their water for drinking, bathing, cooking, and washing.

Further, the city’s poorest are increasingly threatened by outbreaks of disease without sufficient water for hand washing or rinsing food. As more and more water is stored in contaminated containers or in unsanitary areas, waterborne diseases like Diarrhoea, Hepatitis A, and Typhoid Fever will be major risks.

A Crisis Both Ecological and Economic

The wealth disparity in Cape Town is reflective of the country as a whole. Declared an “emerging market” only a decade ago, South Africa today is mired in severe economic crisis, in which the worst effects have been unloaded on the backs of the working class and poor. South Africa’s official unemployment rate is 27 percent, a higher rate than the U.S. ever reached during the worst years of the Great Depression. Unemployment among youth stands at over 50 percent.

The gap between South Africa’s rich and poor is astonishing. According to the World Bank, the country has the distinction of the world’s highest Gini coefficient — an indicator of wealth disparity. “The poorest 20 percent of the South African population consume less than 3 percent of total expenditure, while the wealthiest 20% consume 65 percent.” More than half the population — 30 million people — live below the poverty line and that number has increased by 3 million since only 2011. Colonialism and the Apartheid era left a legacy of deeply racialized poverty, in which the poor are overwhelmingly Black.

The current drought will only worsen the situation for the working class and poor. The Western Cape is a major agricultural zone in South Africa, with around 20 percent of the nation’s agricultural products, such as wine and grapes. As a result of the water shortage and lower crop yields, around 30,000 seasonal farm workers — approximately 15 percent of the seasonal workforce — were recently laid off.

The Western Cape is experiencing the worst drought in a century and temperatures are rising steadily across southern Africa. Scientists say the rate of increase in the region may be as much as 1.5 times the global average. Climate scientist Peter Johnston says that “The increased temperature is going to increase evaporation. Increased evaporation is going to mean there’s less water for us to use.”

The major capitalist parties in South Africa — the Democratic Alliance and the African National Congress — assign blame to each other for the water emergency Cape Town is now experiencing. The crisis, they say is a result of the other party’s incompetence. There’s no doubt this blame is deserved to a certain extent. Yet this focus on mismanagement overlooks the larger sources of the water shortage.

At the heart of the Cape Town crisis is the capitalist mode of production. Corporations, from local brands to multinationals like Nestlé, continue to bottle the water resources of the Western Cape and sell water as a commodity. While of hundreds of thousands of the city’s residents face the prospect of illness or disease as a result of a lack of clean water, corporations continue to profit immensely. Hentie De Witt, the CEO of the South African beverage corporation Hentie says that he has no concern about the company running out of water to sell despite the Day Zero threat, “The demand for our bottled water has now peaked high, and we are fortunate that we are in a position to supply water for customers.” Worse, corporations like Coca Cola use billions of litres of water annually from local reservoirs to produce soft drinks which offer no health benefits to South Africans.

Mining corporations, particularly in the gold and coal industries, and large-scale agriculture have also severely polluted many reserves of clean water with complete impunity. The World Wildlife Fund states that a quarter of South Africa’s major rivers are currently “critically endangered” by acid mine drainage, pollution from fertilizers and pesticides, runoff and drought.

And even the best management by local governments will not prevent the water crisis from worsening and spreading throughout the Global South in the coming years, if there is not immediate action taken in the central countries to slash emissions. It is the world’s largest polluters, particularly the U.S. and China, since the period of capitalist restoration, who deserve the greatest share of the blame for the water shortage in Cape Town.

The Water Emergency is Global

Capetonians are not alone in worrying about whether they’ll be able access to clean water. The UN states that in Sub Saharan Africa, only 40 percent of people have water piped into their homes. More than a quarter of of residents of this region of the world must take at least a half-an-hour round trip to access an improved water source.

What makes Cape Town unique is that it is a major city, where water shortages were supposed to be a thing the past. However, in an era of rapidly rising temperatures and severe drought, the South African city only offers other cities around the world a glimpse of their future. Sao Paulo, Brazil’s largest city, and one five times the size of Cape Town may be next. Massive deforestation in the Amazon in recent decades has interrupted the natural water cycle and led several of the city’s water sources to dry up. In 2014-15, Sao Paulo faced not only the worst drought in its history, but one in which rainfall was one half of the previous record low.

Millions around the worlds are today in a water emergency, or soon will be. A planned system that places human needs and ecological sustainability above profit — that is a socialist mode of production — is the only way out.