Death of Otto Warmbier – That Could Have Been Me!

Sure, it wasn’t too bright of Otto Warmbier to steal a propaganda poster in Pyongyang. But our author was also there as a tourist, and totally understands how this could have happened. North Korea has committed a terrible crime – but one that pales in comparison to the crimes of US imperialism. 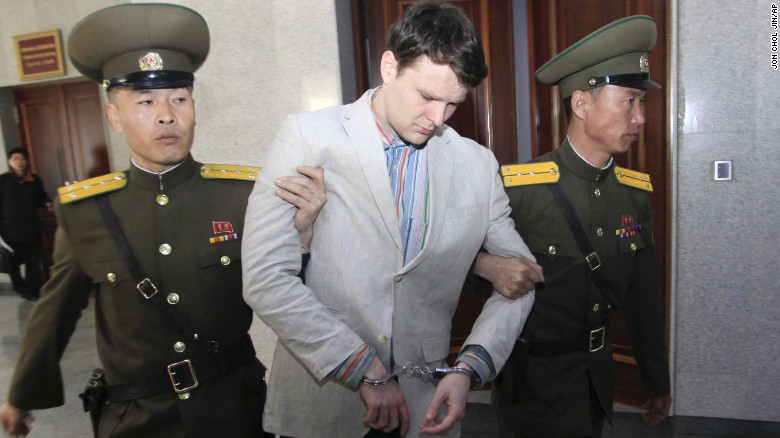 I went to the Democratic People’s Republic of Korea (DPRK) as a tourist in 2014. I went with the same company as Otto Warmbier, Young Pioneers Tours. I stayed in the same hotel in the capital.

When the Warmbier incident went public, I heard people asked: “What did that dumbass expect when he decided to steal a propaganda poster in North Korea?” Sure, as a rich white man in the US, he was raised to not expect consequences for his actions. One much-read blog has pointed out how his white privilege did not extend to North Korea. But based on my experience, I want to point out three things:

1. North Korea gave us amazing white privilege! To go to the fabulous indoor-outdoor water park, we paid the equivalent of an average monthly wage in the country (20 US dollars). In exchange, the lifeguards insisted we go to the front of every line for the slides while Korean children watched us earnestly. We were served huge buffets three times a day, until we felt like we would burst, while large sectors of the working population suffer from undernourishment.

2. The DPRK is simply surreal. It’s hard to take everything seriously when you’re there. As Ivan Novak of the Slovanian band Laibach says in the documentary Liberation Day: “I don’t think all this is staged.” The whole country just seemed too big to have been scripted for his entertainment. But he couldn’t be sure. And neither could we.

3. North Korea tourism involves a lot of drinking. “Top-notch beer at rock-bottom prices”, as our state guide explained in her eerily folksy English. Most nights there was nothing to do except hang out in the sky bar in the 47th floor of the hotel. We certainly weren’t allowed to walk around outside. Of course people in a drunken stupor talked about the hotel’s mysterious fifth floor. One party even went off to search for it, but found all doors in the stairwell locked. Still, I can easily imagine myself giggling if someone came back with a poster.

I remember laughing when I first read about Warmbier’s conviction. He’d spend a few months in a villa and then write a bestseller about his time in a “prison camp”. So what happened to the 23-year-old? It seems highly unlikely that he was killed by a combination of botulism and sleeping pills, as the North Korean authorities claim – but no less likely that his jailers deliberately tortured a valuable American hostage to death. At least that was never reported by other US prisoners in the country. We might never know what stopped the flow of oxygen to his brain.

Perhaps Warmbier tried to hang himself and was only rescued after suffering brain death. In the bizarrely bureacratic system of Juche, it’s possible that every single layer of the apparatus simply refused to deal with the news. So the whole state just tried to ignore the situation until their coma patient began to decline. But this is all speculation.

Clearly, this was a monstrous crime: What kind of system murders someone for stealing a poster? The Stalinist-nationalist-obscurantist Kim regime likes to brag about the nation’s “single-minded unity” – but only reveals its wobbliness with such horrific persecution.

As Donald Trump denounces the “brutality” of Warmbier’s murderers, we shouldn’t forget the context. In Guantanamo Bay, the United States has detained and tortures hundreds of foreign citizens, forcing dozens to suicide attempts. Trump campaigned on the pledge to imprison and torture more people in the facility.

Just like North Korea, the United States relies on racist mass incarceration and jingoistic militarism. Both countries probably have more in common than either side would be happy to admit.

But North Korea is a poor country which for more than 100 years has been savaged by imperialism. The non-capitalist economy was established as a result of Korean workers’ and peasants struggles against occupying powers. It’s the poverty and isolation of the country that allowed a Stalinist bureaucracy based on corruption and essentially religious worship of the leading dynasty to rise from the ashes.

The brutal regime in North Korea can only maintain itself thanks to the constant pressure of imperialism. The masses are often willing to accept the lies and deprivations because they know that a US-led “liberation” would only be worse. Iraq and Libya have provided ample evidence.

While we worry about the DPRK developing ever more sophisticated nuclear weapons, we shouldn’t forget that Trump commands the world’s second largest arsenal – in the only country to have ever used such a weapon against another. That’s what I remind myself when I think about Warmbier’s death. Sure, that could have been me. But I also could have been a North Korean worker worried about the possibility of a US attack. That’s why I opposed imperialism far more than Pyongyang’s weak Stalinist regime.