Right-wing intimidation of activists in France, which has been ramping up recently, has taken a new turn with a public death threat against Anasse Kazib — a trade union activist and a comrade of Left Voice’s sister organization. 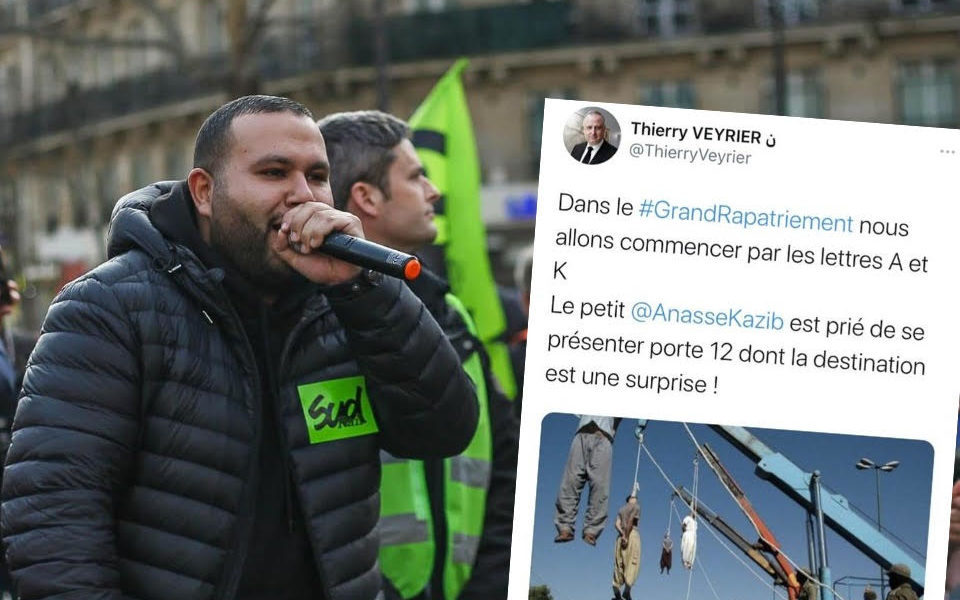 Anasse Kazib, a trade union leader in France and activist of the New Anticapitalist Party and Left Voice’s sister publication Révolution Permanente, was the target on August 30 of a public death threat by an official of the National Rally (RN), the extreme right-wing party that was known as the National Front until June 2018. Thierry Veyrier, the regional head of the RN in Val-de-Marne, issued the threat on Twitter. It follows a series of intimidating acts undertaken by the extreme right against Anasse Kazib and other activists of immigrant origin.

Above a photo showing several people who have been hanged, Veyrier wrote in a tweet, “In the #GrandRapatriement” [“Grand Repatriation”] we will begin with the letters A and K. Little Anasse Kazib is to present himself at gate 12; his destination is a surprise.” 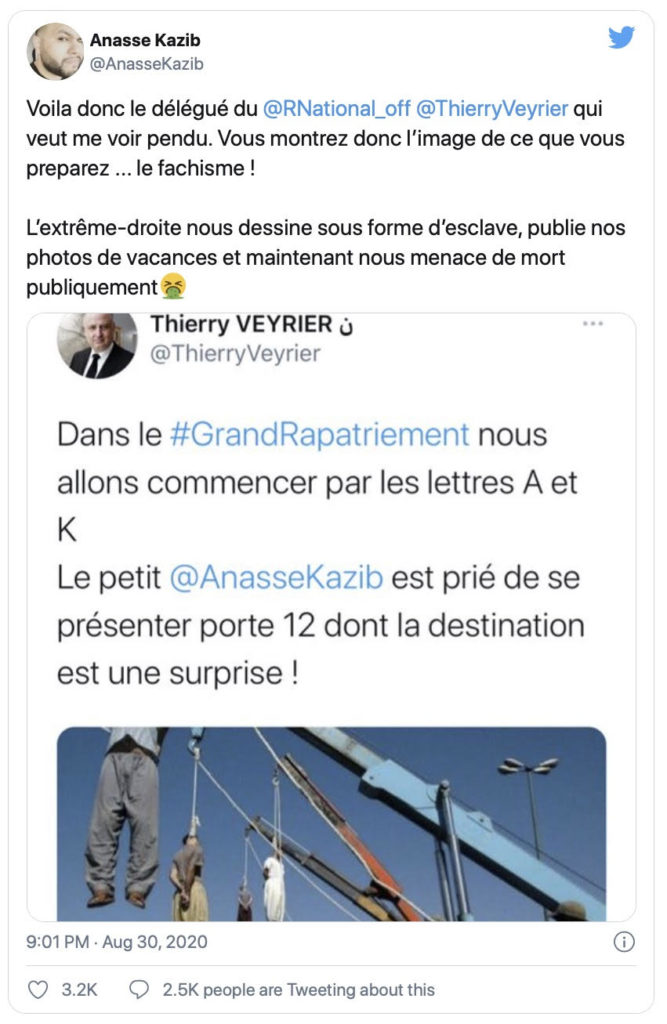 Anasse tweeted in response, writing, “Behold the RN delegate Thierry Veyrier, who wants to see me hanged. You are witnessing the image of what they are preparing: fascism. The extreme right sees us as slaves, publishes photos from our vacations, and now publicly threatens us with death.”

Kazib was referencing several other recent intimidations unleashed by right-wing forces in France in recent days. For instance, the French right-wing magazine Valeurs actuelles over the weekend published a fictional account of the return of Danièle Obono, a deputy in the French National Assembly of Gabonese origin, to 18th-century Africa. In the article, Obono — a member of the Left party La France Insoumise — is depicted in illustrations with chains around her neck. She described the article as “racist shit.”

In response, one of the magazine’s editors defended the story, saying “it sought to show the ‘destroyers of history’ that an inter-African slave trade existed in tandem with the European one.”

Veyrier’s threat against Anasse drove a huge wave of denunciation on social media, which forced Veyrier to delete his tweet. Still, Veyrier justified what he wrote by citing the alleged “Islamism” of Kazib.

Others have been subjected to similar intimidation. Valeurs actuelles attacked the well-known French-Algerian journalist and activist Taha Bouhafs in a tweet, calling him “scum” before it was deleted and replaced with “indigenous activist.” Bouhafs tweeted that he was being deluged with racist insults and death threats underneath photos of his vacation with Assa Traoré taken from Instagram by a “pseudo-journalist” from the magazine. She is a highly visible activist against police racism and repression and the sister of Adama Traoré, a young Malian-French man who was killed in police custody in 2016.

In Révolution Permanente, Anasse emphasized that it “disturbs the fascistic right” when “young immigrants or young people from immigrant backgrounds … speak out in public, engage in social struggles, denounce the injustices of a Republic that knew how to use our elders as cannon fodder in its wars or like coal in its factories or on the railroads, like my father Chibani, but that today treats us as second-class citizens.”

These threats against Anasse and others comes just as a racist national debate is unfolding, with government encouragement, over President Emmanuel Macron’s security policies. The mainstream media is complicit: newspapers have been keeping these threats off their front pages, where they would have been if they targeted representatives of the ruling class, and the broadcast media have buried their reports. Our comrades at Révolution Permanente have appealed to all trade unions and Left political organizations to denounce these relentless racist attacks. More broadly, they have demanded that the media and those in the bourgeois political class who claim to be antiracist to do the same — firmly condemn these racist death threats from the extreme Right.